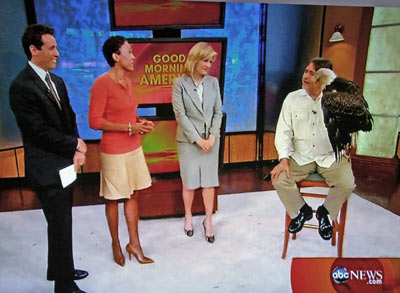 Challenger, a 20-year-old male Bald Eagle named in honor of the lost space shuttle crew, stopped by “Good Morning America” on April 5th with his handler Al Cecere, founder and president of the American Eagle Foundation.

As a baby, Challenger was blown from a nest in a storm and raised by the people who rescued him. Because he was fed by people when he was young, he now thinks he’s a person, according to Cecere.

Challenger, the first Bald Eagle trained to free fly into stadiums during the singing of the “Star Spangled Banner,” was in New York to perform Saturday at the grand opening of the new Yankee Stadium, where the Yankees played the Chicago Cubs.

Bald Eagle Shot in East Tennessee Cared for by the AEF