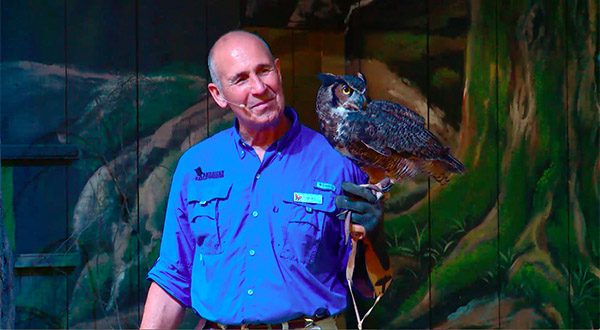 Mike gives the audience an up close look at Owlice the Great Horned Owl.

Kayla brings Tyson the Screech Owl out on stage. 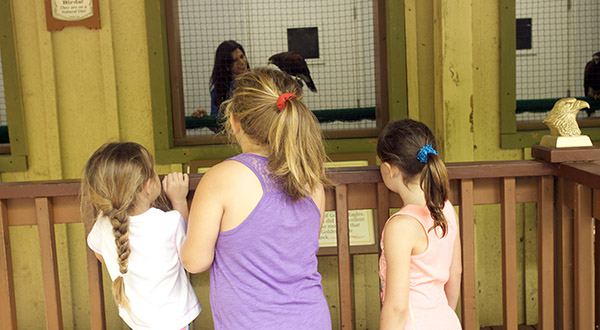 Between shows, guests can view show birds in their mews.

Katelyn holds Victory the Golden Eagle as she shows off her impressive wingspan!

Beth and Bonita explain that birds of prey CAN see in color!

Mike and Spirit share the story of the comeback of the Bald Eagle.

After the show, Friar Tuck takes donations for his Eagle friends! 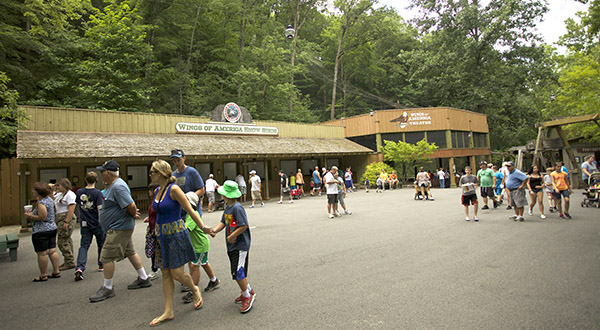 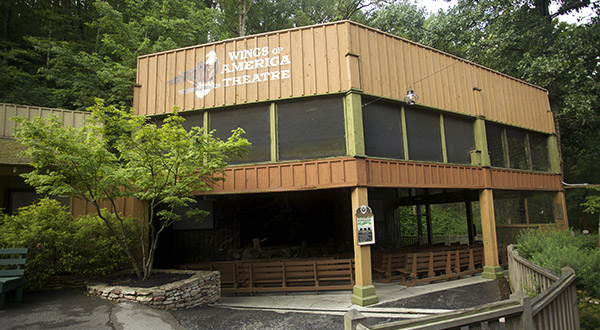 The Wings of America theatre is an open air venue that seats more than 300 guests!

The AEF’s spectacular Wings of America birds of prey show is presented in an open-air theater located at the Dollywood theme park. It features an up-close look at eagles, hawks, falcons, owls and vultures, some in dramatic free-flying form. The show can be seen four times a day from early April through late October, and educates about 150,000 people annually. At Dollywood alone, the AEF has performed more than 30,000 ‘free flight’ birds of prey educational programs over the past 25 years, using these non-releasable permanently disabled trained birds of prey.

'Hero' perches on a branch leading up to her and her mate's nest.

Eagle Mountain Sanctuary is home to two nesting pairs who have hatched and raised many eaglets.

Natural landscaping and flora provide an ideal home for these disabled Bald Eagles.

Breeding pairs make their man-made nests their own with natural material found in their aviary.

'Independence' stands near her watering bowl.

At Dollywood, guests can stroll along the edge of Eagle Mountain Sanctuary, where they will see the largest exhibit of non-releasable Bald Eagles in the United States.

Eagle Mountain Sanctuary encompasses 400,000 cubic feet on the side of a very steep, heavily wooded hillside. The Bald Eagles residing within Eagle Mountain Sanctuary are all permanently physically disabled and would not be able to survive in the wild. These birds are cared for daily by AEF staff who provide fresh water and food and who visually ensure that the Eagles are in good health. They are given full physicals once a year when their enclosures are inspected and renovated.

The exhibit can be viewed by the public from early April through the first week in January, while the Dollywood theme park is open to the general public.