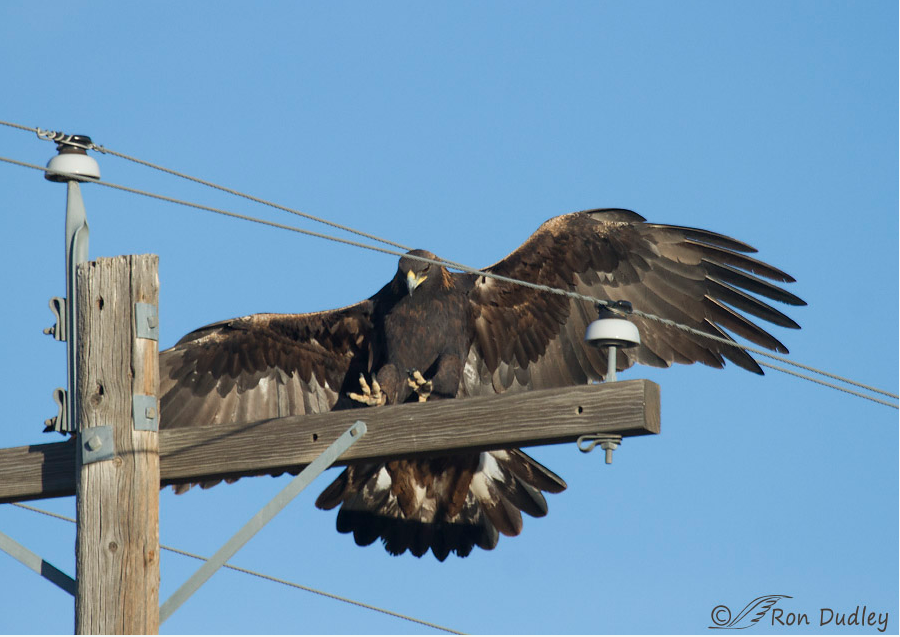 [/av_textblock] [av_toggle_container initial=’0′ mode=’accordion’ sort=” custom_class=”] [av_toggle title=’How have humans impacted the Golden Eagle?’ tags=”] Humans are the greatest threat to Golden Eagles. It is estimated that over  70 percent of deaths of Golden Eagles are attributed to human impact, either on purpose (actually shooting an eagle), or because of human activities adversely impacting the environment.
[/av_toggle] [av_toggle title=’Lead Poisoning’ tags=”] Throughout history eagles have been shot and killed by farmers, hunters, and profit-seekers. Some sheep ranchers believing the Golden Eagle to be a danger to their livestock, trapped, shot, or poisoned the birds into the 1980s. Though shooting continues to be a major problem for the eagle, recently a more subtle threat has surfaced. Lead poisoning has become one of the primary causes of death. This poisoning occurs when the eagle feeds off carrion (dead animals) that have been shot with lead bullets. Millions of birds are affected annually.

Through the process known as biomagnification or amplification, the lead ingested by the eagle from feeding on carrion remains in the eagle’s body and eventually accumulates to highly toxic levels. This process of accumulating large quantities of poison in the body is the same process that occurs with the chemical pesticide DDT which nearly caused the extinction of the Bald Eagle in the early 1960s. As with DDT, the eagle may not die immediately, but eventually suffers from the lethal effects of the lead poisoning.

When ingested in large enough quantities, lead has detrimental effects on the nervous and reproductive systems of mammals and birds. Eagles with lead poisoning may exhibit loss of balance, gasping, tremors and impaired ability to fly. Emaciation follows and death can occur within 2 to 3 weeks after lead ingestion.

[/av_toggle] [av_toggle title=’Wind Turbines’ tags=”] Wind Turbine companies have been given a 30-year exemption from the Federal Goverment to kill Eagles.

Save the Eagles International reports that wind farms are actually slaughtering millions of birds and bats annually.

American Eagle Foundation president and founder, Al Cecere, appeared on Fox News to discuss the ramifications of this extension, stating: “I think this is appalling and outrageous. I don’t think this is good conservation policy. I think this is a lot of politics, and, believe me, I educate people on both sides of the aisle.

I’ve been saving eagles for nearly 30 years. It took over 30 years to bring the Bald Eagle back from the brink of extinction. A lot of work by hundreds of conservation groups and thousands of individuals across the country have put their heart and soul into this effort.

To essentially give power companies a 30-year hunting license to kill eagles and other birds is unconscionable. I think we’re opening a Pandora’s Box that will kill millions of birds over the next 30 years, maybe tens of millions. I don’t understand why we’re making this devastating and senseless compromise.”

Green energy is commendable. Everyone supports it; but modifications must be made in wind turbines—and where they are placed—to counteract the needless slaughter of these magnificent animals.

In February 2016, Auburn University  conducted a study at NREL’s National Wind Technology Center near Boulder, CO. The goal was to do everthing they could to understand how birds interact with the windfarms. Watch a video.

A Mathematical Model to Predict How Many Eagles Wind Farms Will Kill.

PBS Newshour Reports on Wind Turbines (Dec. 6, 2013)
[/av_toggle] [av_toggle title=’Electrocution’ tags=”] Electrocution is major causes of Golden Eagle deaths. A Golden Eagle perched upon a high-voltage power pole may inadvertently touch the power source and the ground at the same time. When this happens, the bird is killed instantly. Golden Eagles may also fly directly into power lines that are not visible in poor weather conditions.

Naturalists propose three suggestions for improving the safety of current power lines for eagles: removing the top crossbar to make them less attractive perch sites, installing a barrier to prevent the eagle from touching the ground and power source at the same time, and building artificial perches above the crossbar where electrocutions usually occur.

Raptors are opportunistic and may use power poles for a number of purposes. In open habitats where few natural perches exist, such as deserts, grasslands, agricultural fields, and pastures, raptors are attracted to power poles, which provide roosting and nesting sites as well as hunting perches.

However, utility structures can also pose a threat to raptors and other birds through electrocutions or collisions. Records of electrocutions and collisions date back to the late 19th century; however, avian deaths associated with power lines were not a widespread concern until the 1970’s when surveys in the western United States found hundreds of eagles shot, poisoned, and electrocuted in rural areas.

Solutions to this problem are well documented and have been implemented by conscientious power companies.
[/av_toggle] [av_toggle title=’Loss of Habitat’ tags=”] Encroachment by humans into the natural habitat of the Golden Eagle has interfered with their nesting and hunting grounds. Wildfire control in California and other states has further limited the range of the eagle.
[/av_toggle] [av_toggle title=’Effects of DDT’ tags=”] DDT was not as deadly to Golden Eagles as Bald Eagles, probably because of their diet of mammals rather than fish.
[/av_toggle] [/av_toggle_container]