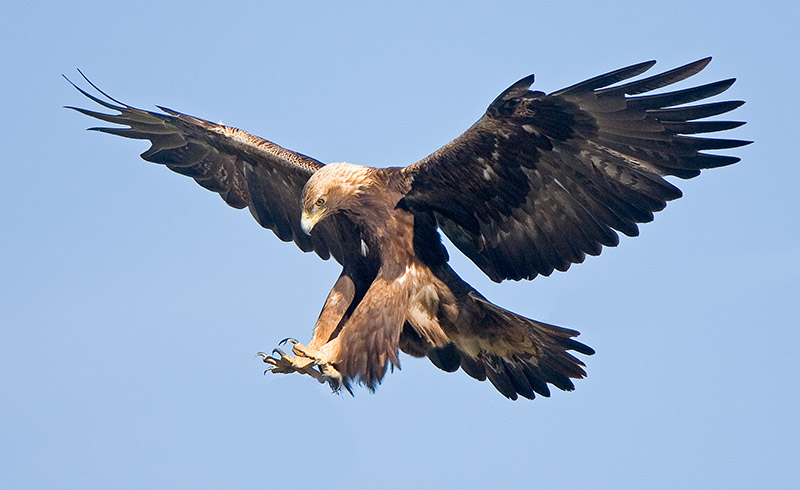 [/av_textblock] [av_textblock size=” font_color=” color=” custom_class=”][/av_textblock] [av_toggle_container initial=’0′ mode=’accordion’ sort=” custom_class=”] [av_toggle title=’What is the scientific name for the golden eagle?’ tags=”] All eagles belong to the family Accipitridae. The scientific or binomial name for Golden Eagles is Aquila chrysaetos canadensis.  The first part of the name is the genus to which the species belongs; the second part identifies the species within the genus.

There are possibly 6 subspecies of Golden Eagles. All subspecies begin with aquila chrysaetos; the third part of the name identifies where that eagle is located geographically.

The subspecies living in North America is aquila chrysaetos canadensis.

American Golden Eagles are usually smaller than the ones in Europe and Asia, but the heaviest Golden Eagle on record,  a female, banded and released in 2006 in Wyoming,  weighed in at 16 pounds.
[/av_toggle] [av_toggle title=’What enables eagles to see from incredible distances?’ tags=”] The Audubon Newsletter from November 2016 had a really good explanation as to how Golden Eagles spot prey from incredible distances.  This audio story is from BirdNote, an Audubon partner.

[/av_toggle] [av_toggle title=’What is the life expectancy of a golden eagle?’ tags=”] In the wild, they have been known to live up to 32 years; in captivity, the oldest Golden Eagle on record was 46 years.
[/av_toggle] [/av_toggle_container]