What is the Status of the Golden Eagle? 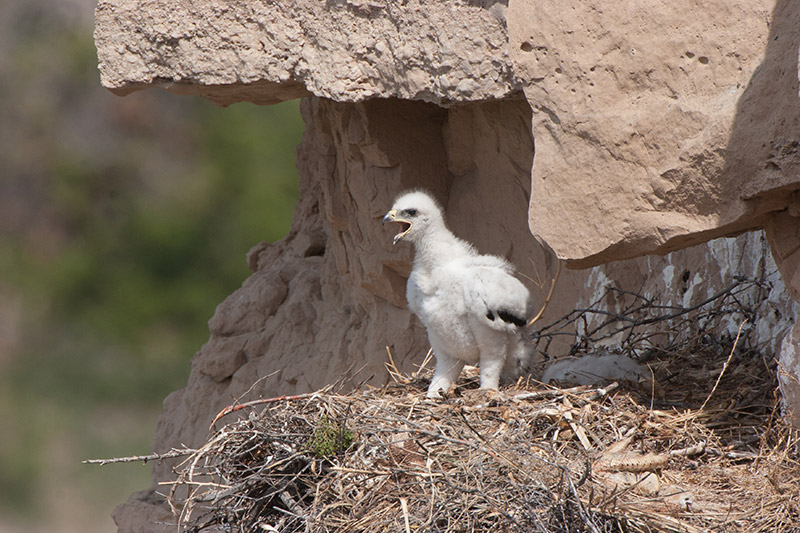 What will the future hold for this beautiful little Golden Eaglet? Will fracking and wind turbines destroy his environment? Let’s keep the West safe for Golden Eagles! Photo © Rob Palmer, www.raptorphotos.com

[/av_textblock] [av_toggle_container initial=’0′ mode=’accordion’ sort=” custom_class=”] [av_toggle title=’Golden Eagle Populations in North America’ tags=”] Golden Eagle populations are thought to be stable. They are found in more places around the world than any other eagle.

In North America, they range from Mexico, into many western states, and even into Alaska.  They are sometimes seen in the eastern part of the United States.

The Cornell Lab of Ornithology states: “Golden Eagle populations appear to have been stable over the last several decades, according to the North American Breeding Bird Survey. Partners in Flight estimates their global breeding population to be 300,000 with 35 percent spending some part of the year in the U.S., 15 percent in Canada, and 3 percent in Mexico.”
[/av_toggle] [av_toggle title=’Survey by U.S. Fish & Wildlife – 2011′ tags=”] The most recent survey of Golden Eagles across four large Bird Conservation Regions (BCRs) in the West—80 percent of the species’ range in the lower 48 states is in these BCRs—provided an estimate of 20,722 Golden Eagles of all ages across the survey area. The best available survey data the U.S. Fish and Wildlife has for Golden Eagles indicate, at best, a stable population in the four Bird Conservation Regions, with a possible decline in the population of juvenile Golden Eagles in the southern Rockies.

The Service extrapolates those survey data to estimate that there may be 30,000 Golden Eagles across the United States.

However, Golden Eagle populations are believed to undergo a  roughly  ten year cycle, so having only four years data (surveys 2006 – 2009) limits the Service’s ability to assess the long-term population trend.

Read the entire report here.
[/av_toggle] [av_toggle title=’California and Nevada Golden Eagle Working Group’ tags=”] The Golden Eagle Working Group (GEWG) was established in 2011 and will be led on a rotational basis by U.S. Fish and Wildlife Service (FWS) Migratory Bird Program, California Department of Fish and Wildlife (CDFW) and Nevada Department of Wildlife (NDOW). The purpose of the GEWG will be to provide a forum for state and federal agencies, nongovernmental organizations, researchers, landowners, and other interested parties to discuss and coordinate activities surrounding Golden Eagle inventory, monitoring, research, and conservation efforts in California and Nevada.

A wealth of current, up-to-date information concerning the Golden Eagle’s status can be found in the many articles and posters linked from this page.
[/av_toggle] [/av_toggle_container]