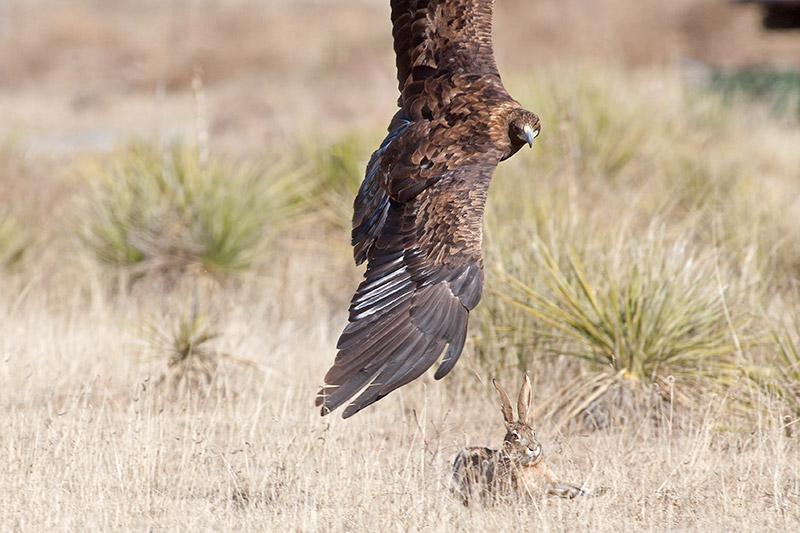 A Golden Eagle zeros in on a rabbit, a staple in the raptor’s diet. Photo taken in Kansas © Rob Palmer, www.falconphotos.com

[/av_textblock] [av_toggle_container initial=’0′ mode=’accordion’ sort=” custom_class=”] [av_toggle title=’What is the diet of Golden Eagles?’ tags=”] Golden Eagle eat small mammals such as jackrabbits, mice, and prairie dogs;  they may also eat reptiles, birds, fish, and even large insects.  They are capable of killing larger bird and mammals, including deer and domestic livestock, bighorn sheep, bobcats, seals, etc.
[/av_toggle] [av_toggle title=’Do Golden Eagles eat carrion?’ tags=”] Yes, Golden Eagles will sometimes eat carrion. They will even follow crows or other scavengers to carrion, which they will then take for themselves. When there isn’t any carrion available, Golden Eagles will even attack owls, hawks, falcons, and wolverines.

In the video linked below (posted on RaptorView Research Institute’s Facebook page), the Golden Eagle was caught feeding on an elk that did not make it through the winter. As reported in their caption, “eagles are opportunistic feeders and will take advantage of an easy meal, like carrion, especially in the winter when prey is less available.”
[/av_toggle] [av_toggle title=’Do Golden Eagles ever hunt in pairs?’ tags=”] Goldens will sometimes hunt in pairs, with one Golden driving the prey towards the other eagle, or distracting the prey while the other eagle makes the kill.  Golden Eagles are fearless, and  will even attack bears or coyotes to defend their prey or their eaglets.
[/av_toggle] [/av_toggle_container]