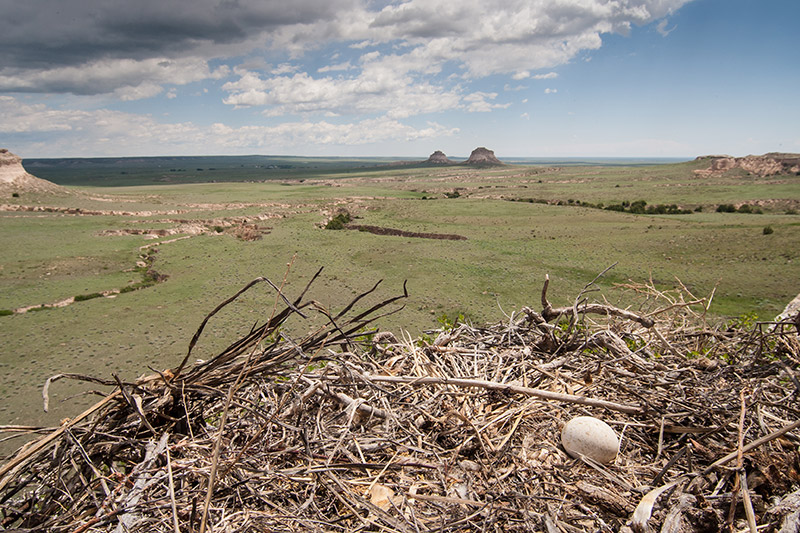 A speckled Golden Eagle Egg rests in a nest located in the Pawnee Grasslands in Colorado. The nest overlooks a wide area and provides an excellent home for the parents and the yet-to-be-hatched eaglet. Photo © Rob Palmer, www.falconphotos.com

[/av_textblock] [av_toggle_container initial=’0′ mode=’accordion’ sort=” custom_class=”] [av_toggle title=’What is the habitat of Golden Eagles?’ tags=”] Their habitat is open and semi-open areas of land. They do not like urban areas or heavily forested areas.  They are found in mountains, canyons, and on cliffs and bluffs overlooking rivers.
[/av_toggle] [av_toggle title=’Where is the Golden Eagle Found?’ tags=”] The Golden Eagle is found in many continents around the world, including North America, Europe, North Africa, and Asia. In the United States, they are primarily found in the Western States from Mexico through Alaska.

Biologists estimate that there are between 20,000 and 30,000 Golden Eagles in the United States, the vast majority being in the West.

There is also a small breeding population of Golden Eagles in northern Ontario and Quebec, Canada, and a wintering population in the eastern United States. In a March 11, 2012 article in the KnoxNews (Tennessee), Sterling Daniels, wildlife surveys manager for the Tennessee Wildlife Resources agency reported that “for the past 4 years (2008-2012), scientists and volunteers from the U.S. and Canada have been working to gain a better understanding of Golden Eagles throughout eastern North America.”

Eastern Golden Eagles nest in Canada and spend the winter in the remote mountain regions of the eastern U.S. In October they migrate south, from the Appalachian chain in Maine down to Alabama. They prey on rabbits, grouse, and turkey while making this journey, or feed on carrion such as road-killed deer or deer killed by hunters.
[/av_toggle] [av_toggle title=’Golden Eagles in Tennessee’ tags=”] Golden Eagle Monitoring in Tennessee (source: Josh Campbell, TWRA)

Efforts began in Middle Tennessee in 2013 to find out how many Golden Eagles descend on the Tennessee landscape in winter.  TWRA biologists began recording images of Golden Eagles in multiple locations across the state, so efforts shifted from simply monitoring to partnering with the Eastern Golden Eagle Working Group to find out more about this elusive bird.  Understanding Golden Eagle habitat use and migration corridors will help biologists to more effectively assess the implications of future change, forest fragmentation, and more.

When Golden Eagles are captured, they are fitted with special transmitters to allow tracking of their movements from summer grounds to winter grounds, increasing our knowledge of population size and habitat preference.  These transmitters collect data year-round, and already biologists have learned the eagles range from Hudson Bay, Canada during breeding season to southern TN and northern AL in winter.

Multiple Golden Eagles have been captured in Tennessee through these efforts, and TWRA successfully captured two birds in early 2017. The juvenile males were fitted with a transmitter and released unharmed. This type of passive monitoring has yielded remarkable data for the species to date.

For more information regarding this species and maps showing the movements of birds being tracked, visit the Tennessee Watchable Wildlife Golden Eagle Research page.
[/av_toggle] [/av_toggle_container]