Golden Eagle as a Symbol

The Golden Eagle as a Symbol 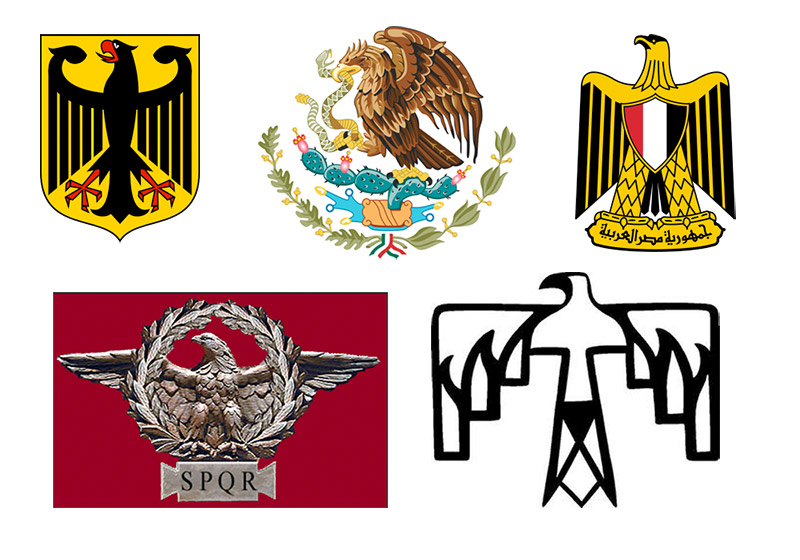 L-R (top): The Golden Eagle is the National Symbol of several countries. L-R: Symbols of Germany, Mexico, and Egypt. Bottom Row L-R: In ancient Rome, an infantry unit was divided into legions. A standard bearer carried before the legion a staff with a symbol to lead the troops into battle. The most famous was the aquila, or eagle. Native Americans considered the eagle to be a messenger of the Gods. Of all the feathers, the Golden Eagle feather was the most coveted. Shown above is a stylized version of the Thunderbird symbol.

Most all Native American Indian Peoples attach special significance to the Eagle and its feathers. Images of eagles and their feathers are used on many tribal logos as symbols of the Native American Indian. To be given an Eagle feather is the highest honor that can be awarded within indigenous cultures.

Both Bald and Golden Eagles (and their feathers) are highly revered and considered sacred within American Indian traditions, culture and religion. They are honored with great care and shown the deepest respect. They represent honesty, truth, majesty, strength, courage, wisdom, power and freedom. As they roam the sky, they are believed to have a special connection to God.

The Eagle flies higher and sees better than any other bird. Therefore, its perspective is different from other creations that are held close to the Earth, and it is closer to the Creator. The Creator also has a different perspective of what occurs below in this world of physical things in which humankind resides. The Eagle spends more time in the higher element of Father Sky than other birds, and Father Sky is an element of the Spirit.

The Eagle is considered to be a messenger to God. It was given the honor of carrying the prayers of man between the World of Earth and the World of Spirit, where the Creator and grandfathers reside. To wear or hold an Eagle feather causes the Creator to take immediate notice. With the Eagle feather, the Creator is honored in the highest way.

The wings of an Eagle represent the balance needed between male and female, each one dependent upon the strengths and abilities of the other.

When one receives an Eagle feather, that person is being acknowledged with gratitude, love and ultimate respect. The holder of the feather must ensure that anything that changes one’s state of mind (alcohol and drugs) must never come in contact with a sacred Eagle feather.

The keeper of an Eagle feather makes a little home where the feather will be kept safely and protected. It should be hung up within one’s home, not placed in drawers or cupboards.

Eagle feathers are never to be abused, shown disrespect, dropped or contaminated. Only real true human Men and Women carry the Eagle feather.

Of all the feathers, the Golden Eagle feather was the most coveted and the most significant.  If someone had one of these in their headdress, they received a great deal of reverence and respect from other members of the tribe.

Many dancers use Eagle feathers as part of their dance regalia. The Creek and Cherokee have an Eagle Dance. If for any reason an eagle feather is dropped, it needs to be cleansed. The arena director’s job is to guard the Eagle feather and not leave the spot it is in until the proper cleansing ceremony is performed.

Eagle feathers were awarded to Indian Braves, warriors and Chieftains for extreme acts of valor and bravery. These feathers were difficult to come by, and were earned one at a time.

Regardless of where or how an Indian Brave accumulated Eagle feathers, he was not allowed, according to Tribal Law, to wear them until he won them by a brave deed. He had to appear before the Tribal Council and tell or reenact his exploit. Witnesses were examined and, if in the eyes of the council, the deed was thought worthy, the Indian Brave was then allowed to wear the feathers in his hair or Indian Headdress or Indian War Bonnet.

An Indian would rather part with his horse or tepee, than to lose his Eagle feathers. To do so would be dishonor in the eyes of his Tribe. Many of the old American Indian Chiefs had won enough honors to wear a double-trailed bonnet that dragged the ground. Only the great and important men of the Tribes had the right to wear the double-trailed Indian War Bonnets.

During the “Four Sacred Rituals”, American Indians wear or hold Eagle feathers. The “Flag Song” has its earliest origins during the period when some Indian Nations would honor the Eagle feather staffs of leaders from different other bands of Indian Nations.

Under both U.S. and Canadian law, a permit is required from official governmental conservation authorities of anyone to possess an Eagle feather legally. Native American Indians acquiring Bald and Golden Eagle feathers must use them for traditional ceremonies or teaching purposes.

Under normal circumstances, it is illegal to use, sell or possess Eagle feathers. Anyone possessing an Eagle feather without a federal permit can face stiff fines and imprisonment.

The American Indian holds the Eagle in the highest regard, and has a true “heart and soul desire” to keep it flying healthy and free for many generations to come.

“Prophesy says that it is time to share some of the sacred traditions of our culture. The four colors of man will be coming together to unite and heal. Creator has given different gifts and responsibilities to each of the four colors. Ours is to help preserve Earth for all the children. Time is running out. It’s time to act.”  — Indigenous Spiritual Leaders of the Americas
[/av_toggle] [av_toggle title=’The Golden Eagle in Ancient Cultures’ tags=”] *In this section, all references to ‘eagle’ refer specifically to the Golden Eagle, as the Bald Eagle is only found in North America.

The eagle with its keen eyes symbolized  courage, strength and immortality, but is also considered “king of the skies” and messenger of the highest Gods.

In ancient Rome, the eagle, or aquila,  was the standard of a Roman legion. Each legion carried one eagle. The importance of keeping the eagle standard safe was of highest importance. The eagle was associated with the god Jupiter; the thunderbolt and the eagle being sculpted on Jupiter’s shield. A famous Roman historian, Pliny, said the eagle was the “most honorable and strongest of all birds.”

In ancient Greece, the Aetos Dios was a huge golden eagle – thought to be the companion of Zeus as well as his personal messenger. Aristotle, a famous Greek philosopher & scientist, said that the eagle “flies high in order to see over the greatest area” and that men called it divine because of this. So, in that day and age, humans considered the eagle divine because it flew so high (to the heavens), and because it was so strong and domineering.

Ancient Germanic tribes associated the Golden Eagle with Odin. In Norse mythology, Oden was a god of war and death, a sky god, and the god of wisdom and poetry. The eagle, considered to be the greatest of all birds, was held sacred to Odin. In Norse tradition, the eagle’s cry signified the birth of a heroic soul. Also in this tradition, the greatest of eagles sits on top of the World Tree and represents the greatest aspects of the mind and spiritual attainment.

Judeo-Christian scriptures praise the eagle with this quote from Isaiah 40:31: “But those who hope in the Lord will renew their strength. They will soar on wings like eagles; they will run and not grow weary, they will walk and not be faint.”

In Christian art, St. John is symbolically represented by an eagle, symbolizing the heights to which he rises in the first chapter of his Gospel.
[/av_toggle] [/av_toggle_container]