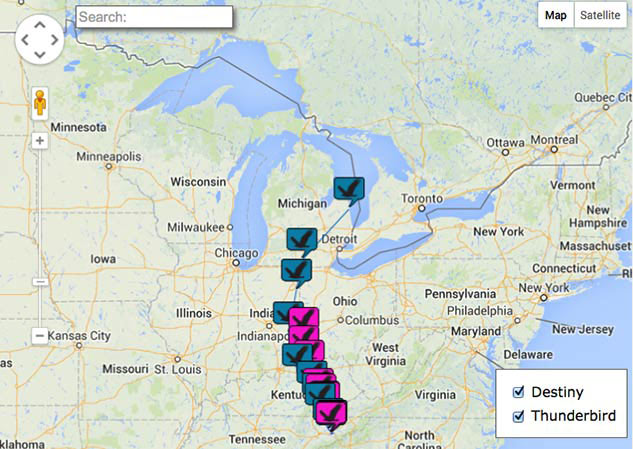 [/av_textblock] [av_toggle_container initial=’0′ mode=’accordion’ sort=” custom_class=”] [av_toggle title=’How do bald eagles find their nests from season to season?’ tags=”] Eagles are diurnal (daytime) fliers, and we believe they use familiar landmarks to guide them to the general area, and once there, use more familiar and specific cues to find their particular lake and then the nest tree. Such cues as extensive mountain ranges, or large bodies of water or the coastline might first be used.

These birds obviously store great amounts of information or memory of the landscapes in their lives, as they easily move 50 – 100 miles in a winter day in search of food. – PN
[/av_toggle] [av_toggle title=’How do migration patterns differ between Southern and Northern Bald Eagles?’ tags=”] No self-respecting Northern eagle would be caught dead with chicks in January! Of course, it’s just too cold, and most of the water they require to hunt in is frozen.

In Florida, this is not a problem: heat is. So, to avoid the hottest time of the year, Florida eagles do their nesting and chick-rearing in the winter months. Those young, and sometimes, a very small percentage of the overall adult breeders, then move north during late spring and summer months. Mostly, Florida eagles have year-round suitable habitat conditions available to them, so they do not have to move.

Northern eagles, on the other hand, will move south when conditions force them to (no open water, hence no fish). This southerly movement typically begins in November. Eagles overwinter somewhere to the south that is suitable, then return north in late March or early April, depending on how far north their breeding territories are. – PN
[/av_toggle] [av_toggle title=’During migration, what is the average distance an eagle flies in a day?’ tags=”] Usually between 75 – 125 miles, but weather affects that estimate. – PN
[/av_toggle] [av_toggle title=’When eagles get ready to fly long distances, do they eat a lot for energy or eat less for weight loss?’ tags=”] Prior to migration eagles will eat normally; they do not fast for weight loss. They may even tend to eat more to load up if food is readily available. We have witnessed migrating eagles stocking up on food en-route also. If a migrating bird comes across a dear carcass, for example, it might hold up its migration for a day to feed up on the available food. – PN
[/av_toggle] [av_toggle title=’If an eagle is relocated, does this affect their migration path?’ tags=”] This refers to eagles taken to a hack tower at a young age for release in another location from where they were hatched. The ‘hacking’ program is based on a well-known concept in avian biology called ‘fidelity,’ and specifically in this case fidelity to birthplace. In the case of hacking, we rely on this concept to predict that young eagles brought to hacking towers at an early enough age, believe this is their nest site, and orient to this site / area once they fledge.

In a nutshell, we now know that eagles that fledge from hacking sites, think this is home, and return to this general area once they reach sexual maturity for their own breeding. – PN
[/av_toggle] [av_toggle title=’What is the bald eagles’ migration path?’ tags=”] The answer to this depends on: 1) where the birds are from; 2) where they are wintering; 3) their age; and 4) the season.

Some eagles don’t migrate at all. If they live in an area where they can survive all winter (one with plenty of open water and food), they will stay close to their nesting area and not move far at all.

If they do have to move to find open water and food, generally they will only move as far as they need to find a suitable over-wintering area that meets their needs.

Young eagles, not yet adults, may move in more random directions than adults that have developed strong habits, returning along the same routes to the same wintering and nesting areas year after year.

In the spring, adult eagles departing their wintering area usually follow a pretty direct route to their nesting area, wanting to get back quickly to reestablish their territory and initiate breeding.

• On August 2, 2013, the AEF released two 13-week-old eaglets from our hack tower on Douglas Lake in Tennessee.  These eaglets, Destiny & Thunderbird, were equipped with GPS tracking devices. Unfortunately, the tracking devices became unresponsive after a few weeks and we were no longer able to track them. However, in just a few days, Destiny traveled to Ohio, and Thunderbird made it all the way to Lake Huron, close to the Canadian border. We have since had several sightings of Destiny, who was identified by her patagial wing tag, L3.  As of August 30, 2015, she was still doing well.
[/av_textblock]