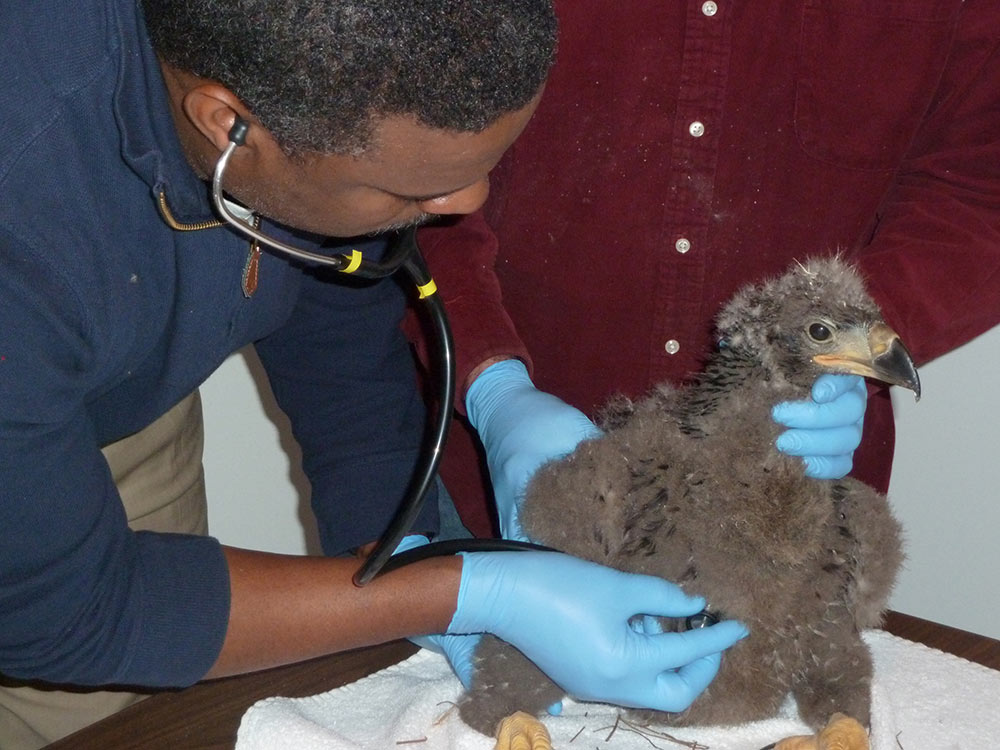 Dr. Mike Jones from the University of Tennessee School of Veterinary Medicine gives a checkup to a young eaglet at AEF.
© American Eagle Foundation.

It is currently believed that the probable cause of the disease is a bacterium that grows on some aquatic plants, particularly on hydrilla. Hydrilla is an invasive species that soon takes over other plant life. Waterfowl consume the infected plants. Bald Eagles prey upon the waterfowl and consume the infected tissues, transferring the disease to themselves.
[/av_toggle] [av_toggle title=’West Nile Virus’ tags=”] Causes loss of interest in food, weight loss, listlessness, weakness, fever, tremors or seizures.

West Nile Virus is carried by mosquitos and infects humans, domestic animals, and wildlife. In wildlife, WNV typically kills scattered individuals of susceptible species in late summer and early fall. The Great Salt Lake is a major water bird migration site, and in November and December 2013, the Utah Division of Wildlife Resources estimated that 10,000 to 20,000 of the 2 million eared Grebes (Podiceps nigricollis) that were on the GSL during migration died and 85 of the 750 to 1,250 Bald Eagles (Haliaeetus leucocephalus) were found sick or dead.
[/av_toggle] [av_toggle title=’Aspergillosis’ tags=”] Aspergillosis is a very lethal fungal infection, from which only 25 percent of infected birds will recover. Many organ systems can be affected, but aspergillosis usually targets the respiratory system.

It is caused by inhaling the spores of fungi in the Aspergillus group. Aspergillus fungi are everywhere in the environment. Wildlife and humans can contract this discease, but the disease is not contagious from animal to animal or animal to person.  If a Bald Eagle’s immune system has been compromised (for example, by ingesting lead), it makes the eagle more susceptible to the disease.
[/av_toggle] [av_toggle title=’Bumble Foot’ tags=”] A disease of the bottom of the feet. If a bird sustains an injury to the bottom of its foot, allowing bacteria to take hold, it can cause the bacteria to encapsulate and allow the colony to continue to grow. A hard corn is produced which can devolve into septicemia and lead to death. It is perhaps the largest cause of referral of birds of prey to a veterinary surgeon. Treatment often requires opening the wound to drain the pus, soaking it in epsom salts, and antibiotic treatment and local application of the antiseptic pyodine as local dressing. (Wikipedia).
[/av_toggle] [av_toggle title=’Frounce’ tags=”] A highly contagious yeast infection of the digestive tract. Typical signs of Frounce are white spots in the mouth or crop, often described as “cheesy” or “white plaques.”  The bird may exhibit head bowing,head flicking, difficulty breathing, or regurgitation.

Must have medical treatment for this disease.