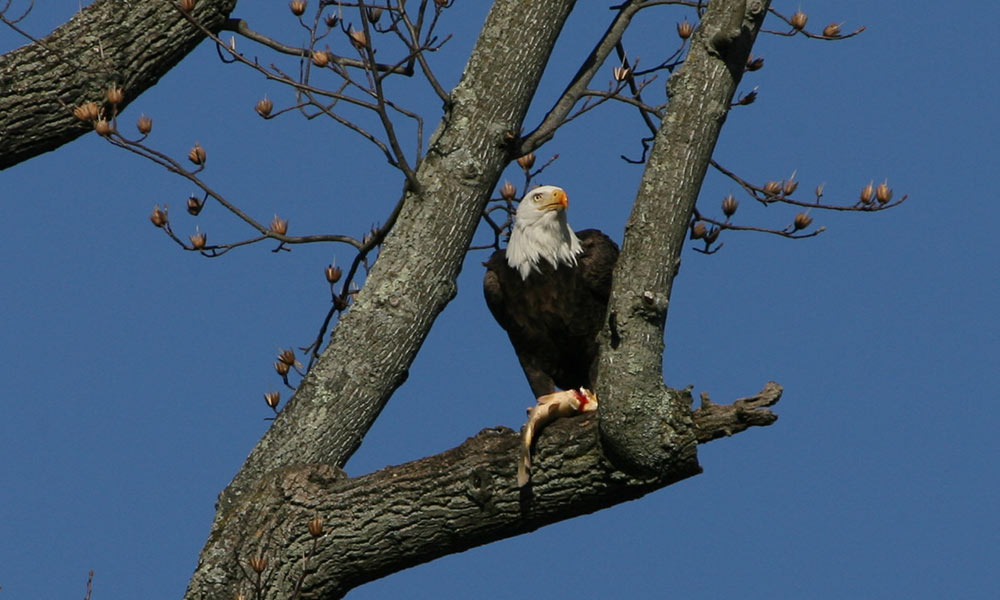 [/av_textblock] [av_toggle_container initial=’0′ mode=’accordion’ sort=” custom_class=”] [av_toggle title=’What is the diet of a Bald Eagle?’ tags=”] Fish comprise about 70 to 90 percent of the diet of Bald Eagles. However, Bald Eagles are opportunist feeders, meaning they will feed on what is most available, and requiring the least amount of energy to acquire it. For example, Bald Eagles will often follow the fall migration of ducks and geese and feed on birds that have been injured by hunters. They also can feed on moderately sized wild mammals, such as ground hogs. – BH
[/av_toggle] [av_toggle title=’What do Bald Eagles eat when they first learn to fly?’ tags=”] During their first year, and until they become proficient hunters, eagles will often feed on carrion, or dead animals. They gradually develop hunting skills.
[/av_toggle] [av_toggle title=’How many pounds of food does a Bald Eagle eat in a day / year?’ tags=”] Assuming the average weight of an eagle to be 10 lbs., it would translate to between .6 and 1 pound of food per day, or between 219 – 365 pounds of food for a year.

In determining how much food a Bald Eagle will eat in a year, we have to look at how much energy (food) an eagle requires on a daily or weekly basis, and then we extrapolate for an entire year.

Some factors affect the raw amount of food an eagle may require: some foods are of higher “energy” value than others; what activity the eagle is involved with (flying, perching, egg-laying, etc.); and time of year. Eagles may require more food at certain times of the year, such as in winter when they are losing more energy.

And, of course, the size (weight) of the eagle plays a role; smaller males will not need as much food as a larger female. Also, smaller eagles, like those from Florida versus their much larger northern cousins, will require less food due to their lower body weight.

As with all creatures, finding enough food (energy) is the key to survival. It has been reported that the energy need of eagles ranges from about 450 – 550 calories per day. Various studies of eagle-energetics suggest that normal food intake for an eagle is somewhere between 6 – 20 percent of its body weight. – PN
[/av_toggle] [av_toggle title=’Can eagles become ill feeding on a deer carcass?’ tags=”] Absolutely. If deer has lead in its body from a hunter’s bullet, both Golden and Bald Eagles can become desperately ill from lead poisoning, and often die.

Lead is known to be an extremely toxic contaminant to wildlife and to humans, and has therefore been eliminated in many things, such as paint.

In the 1990s, it also became illegal to use lead shot over water for waterfowl hunting, as many eagles were found to be dying of lead poisoning from eating crippled waterfowl.

However, there is still much lead out there and it is still used for almost all other forms of hunting.
[/av_toggle] [/av_toggle_container]