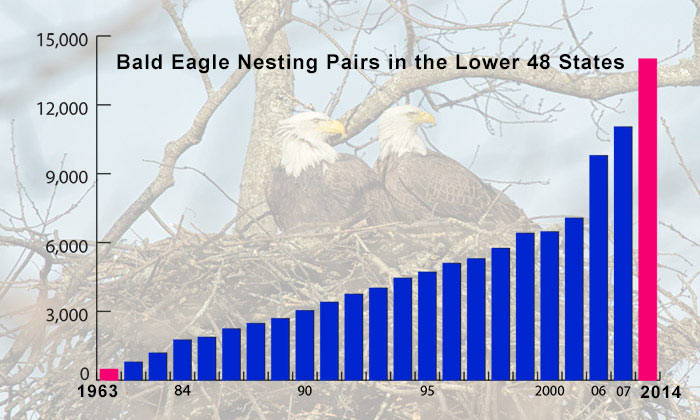 By 1940, the decline of Bald Eagles compelled Congress to pass the Bald Eagle Protection Act, which outlawed the killing and disturbing of eagles, as well as the possession of eagle parts, including feathers, eggs, and nests.

After the insecticide DDT was used extensively after the mid 1940s, Bald Eagle populations declined catastrophically. DDT caused the eggshells to become so thin that they would easily break. By 1963, only 417 nesting pairs were found in the lower 48 states. DDT was banned from use in the United States in 1972 and in Canada in 1973, making it possible for recovery programs to be successful. – BH, National Geographic.
[/av_toggle] [av_toggle title=’What effect did the book “Silent Spring” have on Bald Eagle Recovery?’ tags=” av_uid=’av-56qhwe0′ custom_id=”] Silent Spring is an environmental science book written by Rachel Carson and published in 1962.  The book documented the detrimental effects on the environment—particularly on birds—of the indiscriminate use of pesticides. Carson accused the chemical industry of spreading disinformation and public officials of accepting industry claims unquestioningly.

In the late 1950s, Carson turned her attention to conservation, especially environmental problems that she believed were caused by synthetic pesticides. The result was Silent Spring (1962), which brought environmental concerns to the American public. Silent Spring was met with fierce opposition by chemical companies, but it spurred a reversal in national pesticide policy, led to a nationwide ban on DDT for agricultural uses, and inspired an environmental movement that led to the creation of the U.S. Environmental Protection Agency.  – Wikipedia.
[/av_toggle] [av_toggle title=’How has ‘hacking’ helped restore Bald Eagles?’ tags=” av_uid=’av-4wbj3lk’ custom_id=”] Approximately 15 states have released Bald Eagles from artificial nests in hack towers in order to restore natural nesting. The principle behind eagle hacking programs is that eagles tend to return with approximately 75 miles of their maiden flights to nest after they reach sexual maturity at 4 to 5 years of age. – BH
[/av_toggle] [av_toggle title=’Is it illegal to possess a Bald Eagle’s feathers?’ tags=” av_uid=’av-48grgmw’ custom_id=”] Yes. It is illegal to possess an eagle’s feathers or any parts of an eagle unless you have a special federal and state permit to do so.

The reason is that many eagles used to be killed for trophies and for their feet and feathers. Such unregulated killing can threaten populations of eagles and other species. – PN
[/av_toggle] [av_toggle title=’How has the AEF been involved with hacking and release of Bald Eagles?’ tags=” custom_id=”] By the end of 2019, AEF has released a total of 176 young Bald Eagles from its Douglas Lake, TN hack site, the largest number of any hack releases in the state. AEF has assisted the Tennessee Wildlife Resources Agency and other partners in the hacking of hundreds of other eaglets.  Many eaglets that have been released from AEF’s hack tower (banded and fitted with patagial tags) have been spotted years later by people as far away as the Great Lakes.

As of 2016, states with the largest population of nesting Bald Eagles are Minnesota and Florida.
[/av_toggle] [av_toggle title=’When was the bald eagle delisted from threatened & endangered?’ tags=” av_uid=’av-2j4rak8′ custom_id=”] On June 28, 2007, Secretary of the Interior Dirk Kempthorn announced the removal of the Bald Eagle from the list of threatened and endangered species at a ceremony at the Jefferson Memorial in Washington, D.C.

Bald Eagle Challenger and AEF president and founder, Al Cecere, participated in the delisting ceremony.
[/av_toggle] [av_toggle title=’Return Flight: Restoring the Bald Eagle to the Channel Islands’ tags=” av_uid=’av-1zz2reg’ custom_id=”]
[/av_toggle] [av_toggle title=’Return of the Bald Eagle to New Jersey – Bald Eagle Nest Locations 1985-2015′ tags=” av_uid=’av-1tepo8o’ custom_id=”] At one time, New Jersey was home to more than 20 pairs of nesting Bald Eagles; DDT reduced that number to one pair by 1970.  The ban on DDT and efforts by biologists with the NJ Division of Fish & Wildlife’s Endangered and Nongame Species Program has effectively restored the Bald Eagle to 150 pairs by 2015.  By clicking this link, an interactive webpage will open whereby you will be able to track New Jersey Bald Eagle Nests over the years. 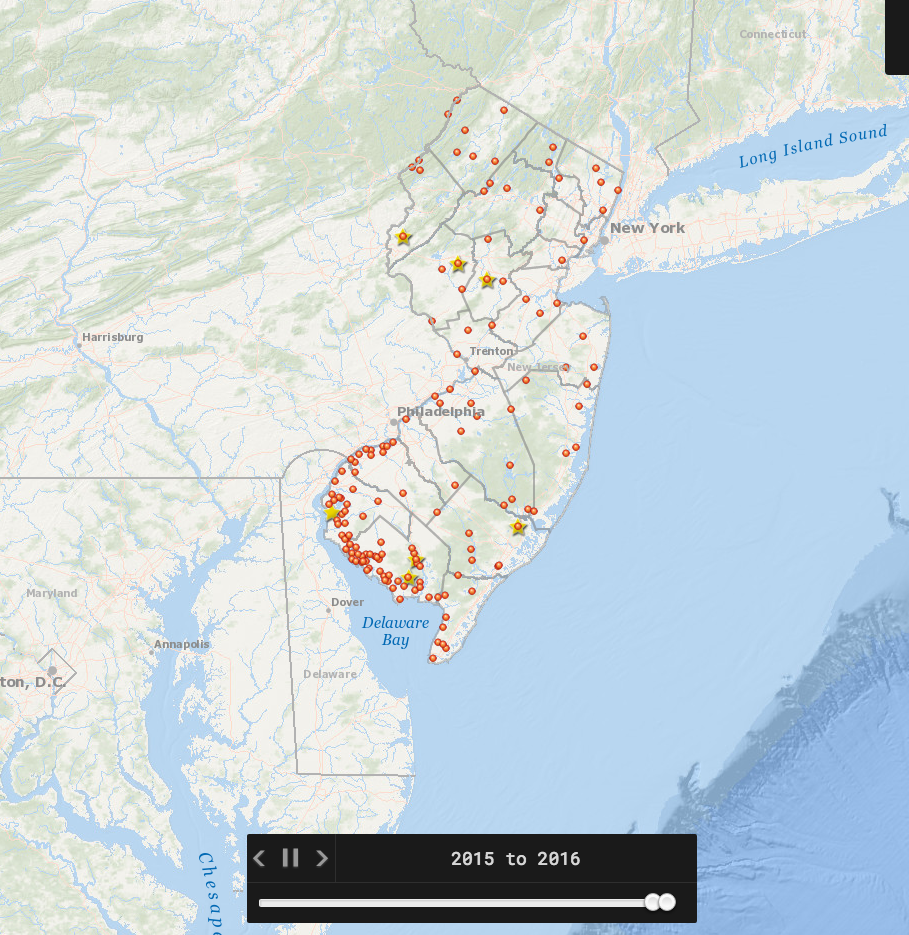 An article from the New Jersey Monthly, The Last Nest: Saving Our Bald Eagle Population, tells the complete story on restoration efforts, including the story of NJ’s very successful hacking program.
[/av_toggle] [av_toggle title=’Why Bald Eagles Returned to NY and Surrounding States’ tags=” av_uid=’av-15xefjs’ custom_id=”] This is a video produced by the Delaware Highland Conservancy about why the eagles returned.

Narrated by Peter Nye (Wildlife Biologist)  and Sue Currier (Delaware Highlands Conservancy Executive Director), it dramatically tells the story of the comeback of the Bald Eagle in New York and surrounding states.

Before conservation efforts began, the last Bald Eagle nest in Massachusetts was recorded in 1905. In 1989, scientists started to seed the state’s population. In the last few years, the breeding population of Bald Eagles in Massachusetts has rapidly increased to a record high, according to state ornithologist Andrew Vitz. In 2017, the state had 68 territorial nesting pairs, nine more than the year before. Read the entire article. 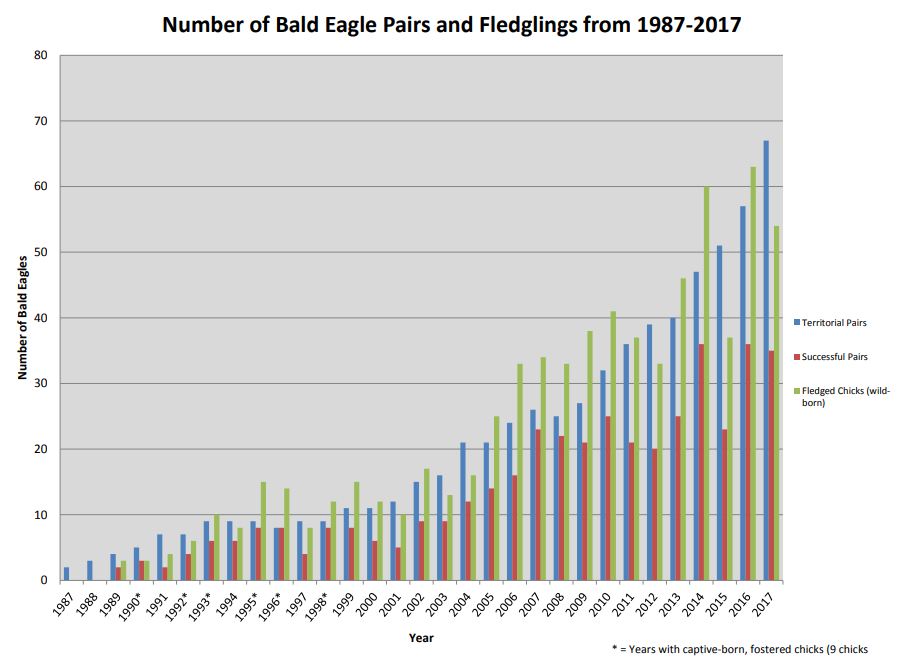