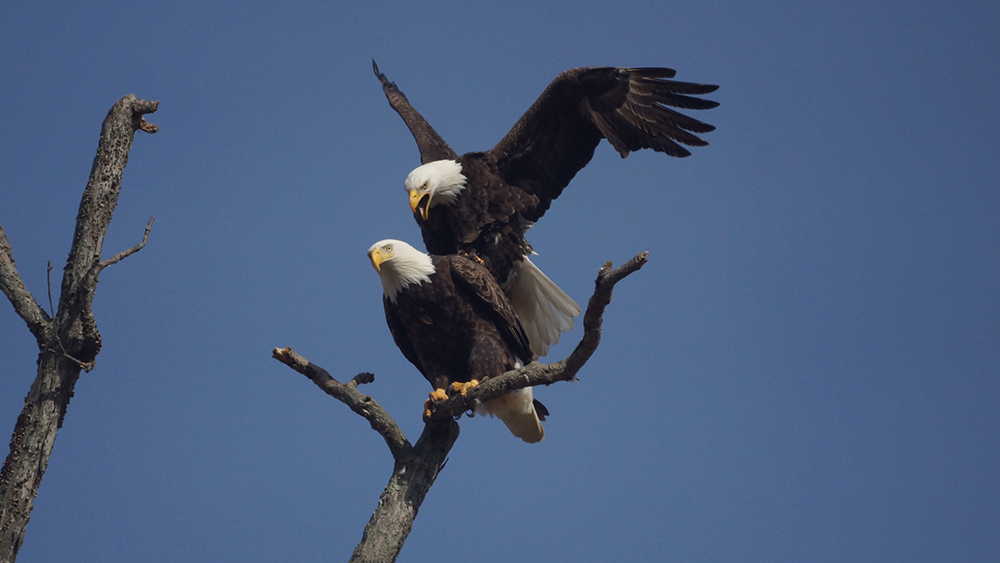 [/av_textblock] [av_toggle_container initial=’0′ mode=’accordion’ sort=” custom_class=”] [av_toggle title=’Do Bald Eagles mate for life?’ tags=”] Typically, yes, although occasionally an intruding adult (not one of the pair) comes in (usually a female) and battles the resident bird for the territory, sometimes then taking over. If one of the pair dies, the other will find a new mate and usually keep going in the same territory. – PN
[/av_toggle] [av_toggle title=’How do eagles mate / copulate and how often?’ tags=”]

Generally, eagles may mate throughout the year depending on if the pair migrates. Frequent mating strengthens their bond to each other and increases the chance of fertile eggs, the female may have 3 two week windows throughout a breeding season where she is fertile. The male’s sperm is said to be viable inside the female for 10 days. Increasing daylight hours causes the females pituitary gland to secrete a hormone that turns on the ova. The ova is turned off by prolactin which is the hormone associated with incubation.

[/av_toggle] [av_toggle title=’What is double clutching?’ tags=”] Double clutching is laying a second set of eggs. This typically happens after the first set is removed (this was done during early Bald Eagle reproduction days to increase the amount hatched each year,. The first clutch was usually artificially incubated). In the wild, a double clutch could happen if the eggs were damaged by being stepped on or lost to other animals.

Eagle biologist, Dr. Peter Sharpe, states: “Eagles will generally not lay another clutch if they have incubated for more than about 2 weeks, so there is probably a switch that is triggered by a particular amount of incubating that does not allow them to become fertile again within a season.”
[/av_toggle] [av_toggle title=’Do Bald Eagles soar alone?’ tags=”] Bald Eagles tend to soar alone, rather than flocking with other eagles. However, they sometimes concentrate in the same place due to a plentiful common food source, or for shelter from the cold wind. – BH
[/av_toggle] [av_toggle title=’Do Bald Eagles establish a territory?’ tags=”] Yes. They select a breeding territory based upon an evaluation of all the things they are looking for: food supply, suitable nesting and perching trees, and isolation from excessive human activity.

These areas are usually near where they themselves fledged as youngsters.

Wintering birds do not establish a territory, but usually do use the same area each winter. – PN
[/av_toggle] [av_toggle title=’How fast can a Bald Eagle fly?’ tags=”] Average migratory flight / soaring speed is 50 kilometers/hour (31.06 mph). Normal flight speed going from perch to perch is much less than this. The Bald Eagle catches prey by flying low and “snatching” with their feet mostly, not like ospreys or peregrine falcons that actually dive at their prey. When engaging in this “snatching” behavior, they can reach speeds over 75 mph. – PN
[/av_toggle] [av_toggle title=’Can a Bald Eagle swim?’ tags=”] Absolutely. They are very good swimmers. Even nestlings that haven’t learned to fly can swim! It’s not uncommon for an eagle to “misjudge” and latch into a fish too heavy / large for it to fly with, so they then may swim quite a distance to shore, and eat the fish there. – PN
[/av_toggle] [av_toggle title=’How far does a Bald Eagle fly each day?’ tags=”] This varies, and there is not one answer to this. It is very dependent on the time of year, the availability of prey, weather conditions, age of the eagle, and many more things.

Obviously, during migration, for those eagles that do migrate long distances each spring and fall, average daily flights can be 124 miles or more.

While on the wintering and breeding grounds, flights are much shorter, and depend heavily on prey availability, suitable roosting locations, and weather.

During non-migratory times, probably less than 10 – 20 miles per day (or less).

Regarding differences between males and females: the distance would be approximately the same during migration, but in breeding situations, the males will travel farther and do more of the food provisioning, while the females will stay closer to the nest, even when they are relieved by the male at the nest. – PN
[/av_toggle] [av_toggle title=’What survival instincts help the Bald Eagle?’ tags=”]

Here are some traits, but not instincts:

[/av_toggle] [av_toggle title=’How much can a Bald Eagle lift?’ tags=”] A good general rule seems to be that eagles can carry up to half of their own weight. This obviously means female eagles are able to carry more larger prey than the males.

Depending on the size of a Bald Eagle, it can lift between 4 – 6 kilograms (8.8 – 13 lbs). Some Alaskan eagles have been recorded lifting weights of well over 7 kg (15.4 lbs).  Sometimes eagles have trouble judging the weight of prey. Eagles in Alaska have “locked on” to a large salmon, obviously heavier than could be carried away in flight, and the eagle then floats and swims to shore with its prey rather than give up the prey. – PN
[/av_toggle] [av_toggle title=’Why do Bald Eagles break off branches while flying?’ tags=”] Immature eagles may occasionally do this for play or practice, but it is typical behavior for adults prior to and during nesting. This is how an adult eagle prepares its nest for the breeding season. Those of our viewers who watch wild Bald Eagles Romeo and Juliet in NE Florida, have seen an entire dead tree being defrocked of its limbs as the adult eagles prepared for their nesting season, bringing branch after branch after branch from this tree to strengthen and decorate their nest. – PN & CS.
[/av_toggle] [av_toggle title=’Why do Bald Eagles interlock talons while soaring?’ tags=”] With wildlife, it is often hard to determine reasons behind behaviors we may observe. Talon-grappling and tumbling are frequently observed behaviors; seen between all combinations of eagles—between mated adults, un-paired adults, adult and immatures, immatures with immatures, etc. These are also likely “unions’ of any-sex combination of birds.

That variety of participants, tells me right away there is no one answer to what this behavior is for, but rather, that it happens for a variety of reasons.

Three come to my mind immediately: pair-bonding, aggression, and play. We also know from observation that these represent very aggressive encounters, where sometimes, one or both of the participants are killed (sometimes they cannot “un-lock” and crash to the ground together. The most often I see this, is with and between immatures, and I’m convinced it is both play and learning (flight capability). I do believe that eagles get enjoyment out of certain activities, which could be called play, such as when they chase each other in flight, tumble, roll, etc. As with humans, I think immature Bald Eagles are more prone to “play” than adult birds. – PN
[/av_toggle] [av_toggle title=’What sounds do bald eagles make?’ tags=”] Bald Eagles have several distinct vocal sounds. The ‘Peal Call’ consists of high-pitched, prolonged, gull-like cries. The ‘Chatter Call’ consists of 3 – 4 introductory notes separated by short gasps of silence and then followed by a rapid sequence of descending notes. They also make a low ‘kuk-kuk-kuk’ call. Females tend to have lower pitched calls than males. Juvenile Eagles have their own ‘Peal Call’ as well as a chirping sound they use as nestlings to beg for food.