Challenger honors the U.S. Armed forces on Veterans Day by appearing on Fox and Friends live from NYC.

Challenger flew at Yankees Stadium numerous times in 2001 after the 9/11 attacks in NYC.

Challenger visits a Veterans. The 91 year old veteran in this photo served 30 years in both the US Navy and US Army during several wars - WWII, Korean War and Vietnam. He served part of his tours on submarines. 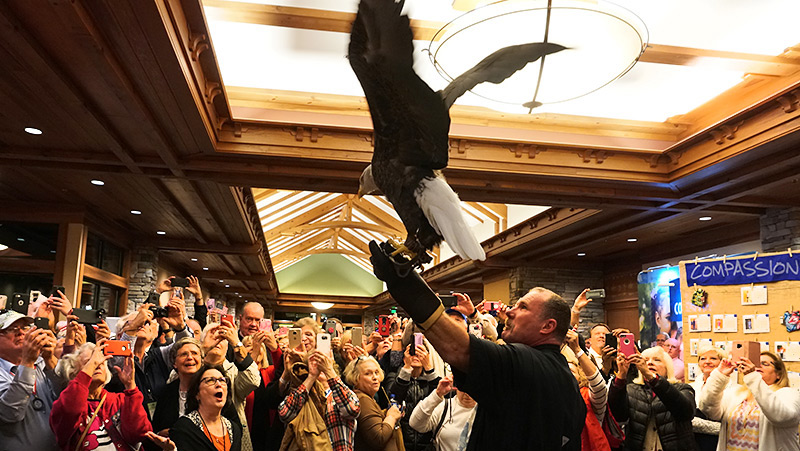 While in coastal cities, the AEF team takes Challenger to local beaches not only to educate passersby, but because Challenger seriously loves the sun and the sand! Every celebrity Bald Eagle deserves a trip to the beach! 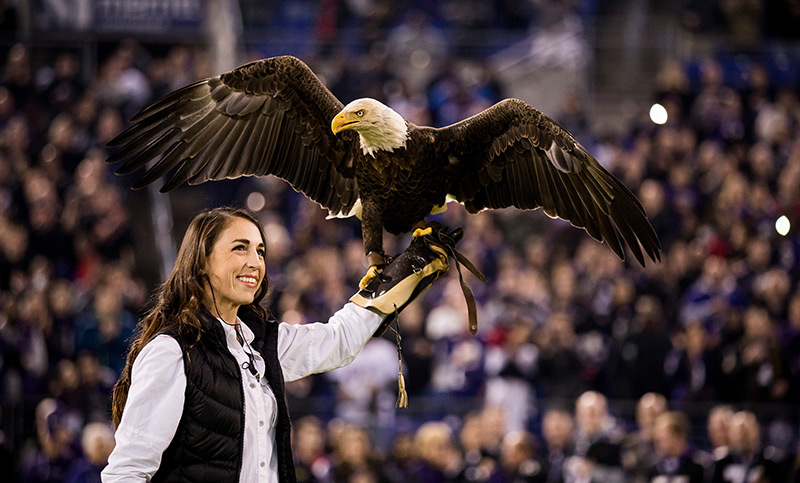 Challenger has educated thousands of individuals at the grand openings of more than a dozen Field and Stream stores!

Challenger wows the crowds on the streets of NYC.

Challenger has influenced millions upon millions of individuals through his National Anthem flyovers.

Believe it or not, Challenger flies cargo on Delta! The AEF has special permission with TSA and Delta to escort Challenger all the way on and off the inside of the cargo bin.

Challenger takes off at during the National Anthem at a 2007 Texas Rangers game!

Believe it or not, when the AEF team is on the road, Challenger drinks water right out of a cup!

Challenger capped off the Star Spangled Banner prior to kickoff between Kansas University and Oklahoma on Saturday, Oct. 15, 2011 at Kivisto Field. Photo by Nick Krug

Challenger perched before members of the 278th Armored Calvary Regiment as they stand at attention during the Salute Our Troops parade ceremonies outside the Civic Coliseum in 2004. Photo by Saul Young/News Sentinel

Challenger makes a sharp turn as he soars over LP Field in Nashville, TN during the National Anthem. Photo by Richard Sueter

A primary role in the recovery of Bald Eagles can be attributed to extensive public awareness and environmental education. The American Eagle Foundation has educated millions of Americans through Appearances and Public Outreach

Although Challenger retired from free flights in 2019, he continues to make appearances at companies, charitable fundraisers, foundations, and sporting teams year round to inspire crowds during the National Anthem…by doing so, he helps raise money to care for the other 70 raptors at the AEF!

Challenger’s past appearances include:

If you would like Challenger to appear at your sporting event, fundraiser, convention, gala, trade show, etc, please email: Jessica Hall

Several of our other non-releasable Bald Eagles have traveled both locally and nationally to educate the public at conventions, galas, trade shows, and other event venues as well.

If you would like to request a Bald Eagle—other than Challenger—or to attend your event, fundraiser, convention or trade show: