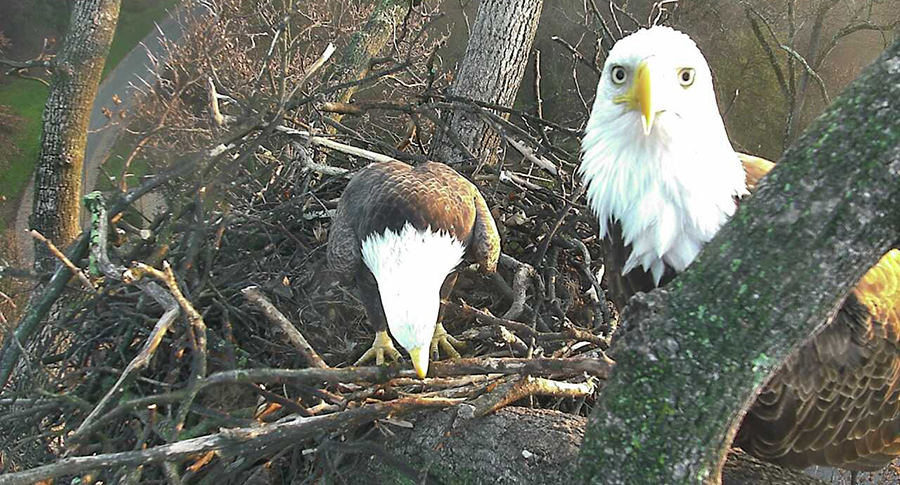 Viewers from all over the world can now watch the nest of “Mr. President” and “The First Lady,” a pair of Bald Eagles nesting in Washington DC at the U.S. National Arboretum. Every special family moment can be viewed 24/7 via two live-streaming high-definition video cameras. Photo © American Eagle Foundation. All Rights Reserved. Screenshots here and below captured by Sue Greeley and Julia Cecere

WASHINGTON, Feb. 15, 2016 — Eagle nest cams have become a nationwide sensation over the past several years, providing biologists with new insight into eagle nesting behavior and giving the viewing public a new source of inspirational online entertainment. Now, the 501(c)(3) non-profit American Eagle Foundation (AEF), in cooperation with the USDA’s U.S. National Arboretum (USNA), is proud to announce the most patriotic eagle nest cam viewing experience yet!

Viewers from all over the world can now watch the wild nest of “Mr. President” and “The First Lady,” a pair of Bald Eagles nesting in the U.S. National Arboretum in Washington, D.C. 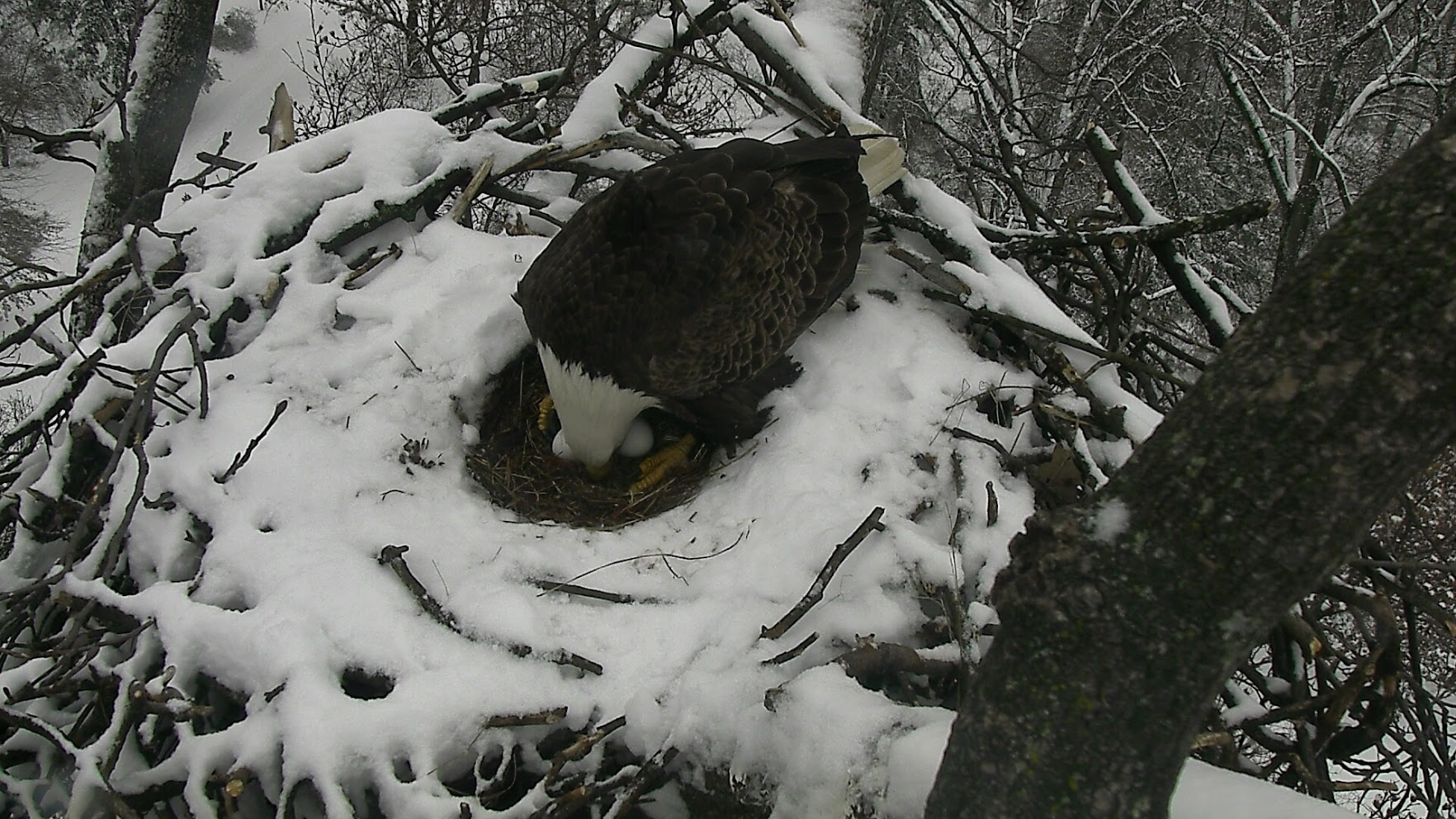 Two treasures are being incubated in the nest. Expected hatch time will be mid-March.

All winter long, these eagles have been tirelessly performing “nestorations,” fortifying their nest with sticks and making it comfortable for raising a family. Their hard work finally paid off on February 10th when The First Lady laid their first egg. A second egg came shortly after on Valentine’s Day! Both eggs are expected to hatch mid-March after 35 days of incubation by both parents.
Every special family moment can be viewed 24/7 via two live-streaming high-definition video cameras by visiting eagles.org or dceaglecam.org.

“The opportunity to sponsor a project of this nature is an honor,” says AEF Founder and President Al Cecere. “Live-streaming cameras that feature our Nation’s Symbol nesting in our Nation’s Capital…you can’t get much more American than that. It’s a great addition to our Nest Cam Program and we hope it brings joy to a lot of people.”

In October 2014, this bonded pair of eagles chose a prime location for their nest: a tall Tulip Poplar tree amongst the National Arboretum’s blooming Azalea collection overlooking the fish-filled Anacostia River. They are the first Bald Eagle pair that has nested in this location since 1947. Had they chosen a tree just a little further up Mount Hamilton, the U.S. Capitol Building would be in their direct line of sight. These birds successfully raised one healthy eaglet during the spring/summer of 2015.

Last year, after an educational visit to Capitol Hill, the American Eagle Foundation and their celebrity non-releasable Bald Eagle Challenger had the privilege of visiting the Arboretum, where they first learned about this idyllic nest site. Soon afterwards, the AEF and USNA entered into a partnership to place two HD video cameras at the top of the nest tree with direct views into the nest.

After the eagle pair left their nest site in August 2015 for their annual migration, Al Cecere, Julia Cecere, and Spencer Williams of the AEF traveled to D.C. to install cameras and other related equipment in-and-around the nest tree with the help of experienced tree climbers. The USNA ran about a half-mile of fiber optic cable to the cameras’ control box located about 200 feet from the base of the tree. The entire system is powered by a large mobile solar array that was designed and built by students and staff from Alfred State College, SUNY College of Technology and was partially funded by D.C.’s Department of Energy and Environment (DOEE).

“Bald Eagles don’t always return to their first year nests. It was a little risky investing in this project without any certainty that the eagles would return for a second season,” says AEF’s Publicity Coordinator Julia Cecere. “It was a happy day for everyone when both eagles were spotted back on the nest this past October.”
USNA’s Agricultural Research Service (ARS) Scientists Ramon Jordan and Sue Greeley have been keeping a close eye on the eagles ever since they chose the Arboretum as their home in 2014. Dan Rauch (DOEE) has been documenting the activities of the eagles since then as well. Earth Conservation Corps (ECC) volunteers have monitored this nest and other nests in the DC area in addition to coordinating an effort to clean up the Anacostia River, which provides an abundant source of fish to eagles in D.C.

Staff from USNA engaged in early consultation with Craig Koppie at the U.S. Fish and Wildlife Service (USFWS) Chesapeake Bay Field Office to avoid disturbance and minimize potential impacts to the new eagle pair. This spring, the University of Maryland in collaboration with the National Park Service, USFWS, and DOEE will be conducting an assessment of environmental contaminants at eagle nests. Blood samples will be taken from eaglets at nest sites in Washington, D.C., including the National Arboretum location. Additionally, each eaglet will be marked with leg bands for identification.

About the American Eagle Foundation
The American Eagle Foundation (AEF) is a non-profit 501(c)(3) organization whose mission is to care for, restore, and protect the Bald Eagle and other birds of prey. For 31 years, the AEF has been carrying out its mission through Education, Repopulation, Conservation, & Rehabilitation. This public charity is headquartered at the Dollywood family theme park in Pigeon Forge, TN. Its famous Bald Eagle “Challenger” has performed free-flight demonstrations at more than 370 events across the U.S. over the past 20 years, all in an effort to educate and inspire the public. Learn more at www.eagles.org.

About the U.S. National Arboretum
The U.S. National Arboretum is part of the U.S. Department of Agriculture’s Agricultural Research Service (ARS), their premier scientific research agency. The Arboretum, which encompasses more than 446 acres of land in northeast Washington, D.C. and also has worksites in Beltsville, MD, and McMinnville, TN, is one of the world’s premier woody plant research facilities and public gardens. Established by Congress in 1927, the Arboretum serves the public’s need for scientific research, environmental education, and gardens that conserve and showcase plants. For more information please see the Arboretum’s web site at www.usna.usda.gov.