NE16, aka ‘Peace,’ an eaglet in the NEFL nest of Romeo and Juliet, was hatched on December 18, 2016.  His sibling, NE17, aka ‘Hope,’ was hatched December 20, 2016. Both eaglets progressed normally in the nest until February 6, 2017 when Peace was observed with a noticeable balance issue. Our cams were able to zoom in to the nest to see black monofilament (fishing line) around Peace’s left foot.  Rescue efforts were begun so that Peace could be taken from the nest and any injuries observed and treated. Shortly thereafter, it was observed that the filament on his left foot was gone. We hoped that all would be well and that Peace’s issues would take care of themselves.

On the night of February 7, a storm rolled through the area and caused a power outage for almost 24 hours and electricity to the cams was halted. When the electricity was restored on February 8, it was immediately noticed that Peace was still having significant balance issues and problems with the right leg when trying to walk.

Although the monofilament was gone from his foot, a decision was made on the evening of February 8 to continue plans for the rescue, this time with the intention of checking the eaglet for injuries or other potential problems that might be treatable. The U.S. Fish & Wildlife Service (USFWS) was fully on board with this rescue attempt. Following retrieval of Peace from the nest, he was examined on the ground by Al Cecere of the AEF and a vet tech from Audubon, and then Cecere and Gretchen Butler transported the eaglet to Winter Park Veterinary Clinic for radiographs, blood tests, and a physical checkup. Peace was then taken to the Audubon Center for Birds of Prey in Maitland Florida for further observation, treatment, and rehabilitation.

Release at “The Hamlet”

Lisa Sifonte provided the video below, adding the following information: The Audubon Center for Birds of Prey partnered with AEF on the rescue, rehabilitation, and release of Romeo & Juliet’s Eaglet Peace. This video is a combination of videos and pictures of Peace’s morning, starting at the Audubon center.

After retrieval from the Flight Enclosure, he was weighed and logged at 6.34 lbs. He was then taken to the clinic to be banded with his U.S. Fish & Wildlife Service band. In addition, Peace was the first eaglet to receive a green auxiliary band. This band will be used to obtain information on nest site choices by Florida’s eagles. Audubon would like faithful bird watchers who see the green bands to report the whereabouts over the coming years. Peace’s tag is K/00. After banding, Peace was examined to make sure there were no issues that would compromise a successful release.

After the examination was completed, Peace was placed in the Audubon van for his drive back home to “The Hamlet.” So many emotions for so many when he exited the box and had a perfect flight. He was located in the area, confirming that his first flight landing was perfect. Once located, he was observed going from tree to tree. It could have been because of the crows chasing him; regardless, each landing was perfect. Since he proved he could handle himself, all the volunteers left the area to allow him to continue his journey in the wild.

Peace flew beautifully after being released at ‘The Hamlet’ on March 14, 2017! He made several flights and landed perfectly each time. Photo ©Shari Pfannenstein. 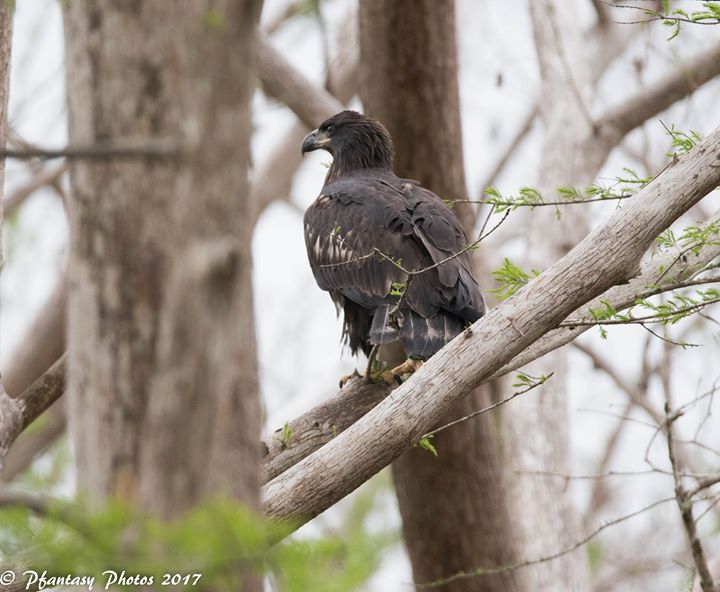 Update March 8, 2017: Bob (the companion eagle) has been moved to another flight enclosure in hopes that Peace will be encouraged to fly higher in the larger flight enclosure he is in.  Although Peace is doing well, his flying skills need to be bumped up a bit before he can be released, and it is hoped that removing Bob (who is non-flighted) will motivate Peace to spread his wings and start flying the length of the enclosure at a higher level.

LATER THAT DAY…  And that’s exactly what has happened!! Gretchen reports that Peace flew from the perch by his nest all the way to the high perch at the end of the flight just this afternoon! Several chatters saw it on the live feed, so we’re all so excited and proud of the progress Peace has made.

Video March 3, 2017: Peace is doing well with flying skills. Today he flew the length of the flight enclosure with a stop at the perch, where he made a very nice landing.

Update March 1, 2017: Dianna from Audubon reported that Peace successfully caught a live fish out of the pond in the flight barn and ate it!  Peace has a good appetite, and especially enjoys rats.

When Peace first arrived, he was given complete rest to help his leg heal and allow his balance issues to resolve.  Pain medication was initially given to help with this, but he is now off all meds! Food is being given 3 times per day, with human contact avoided during feeding so Peace will not associate food with humans. Audubon has kept the AEF updated with frequent reports and photos, and Peace is making good progress.  He has been placed in a large flight enclosure at Audubon where he can practice his wingercizing skills, along with gaining better balance as he perches on ramps within the enclosure. You can watch live video of Peace on Audubon’s cams. 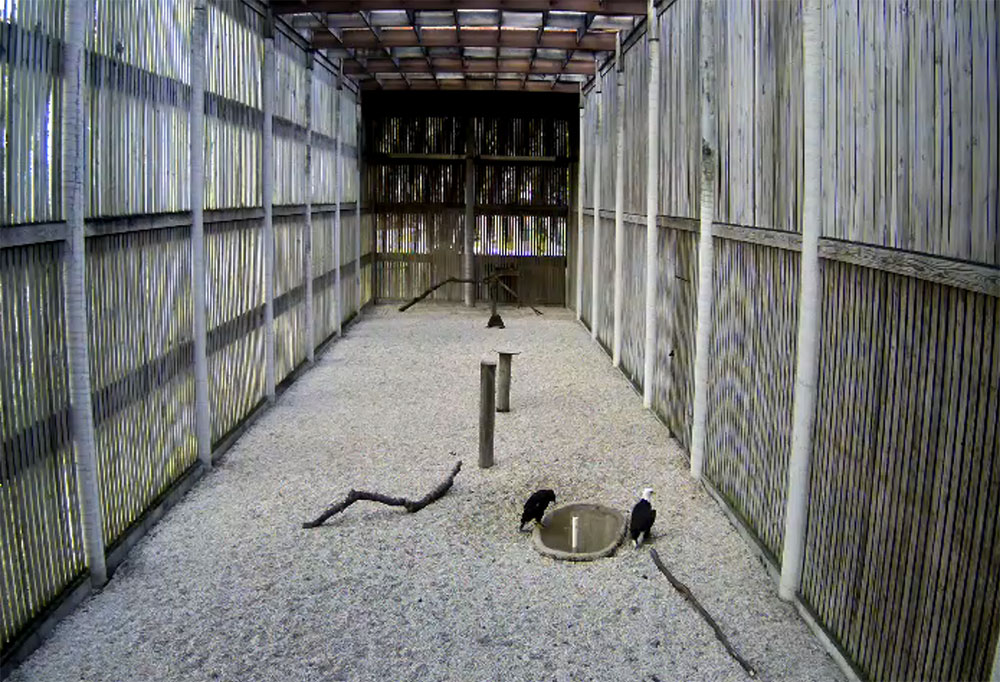 In addition, Peace has a flight enclosure -mate, a non-aggressive, non-releasable Bald Eagle that Peace seems to enjoy being with. Peace follows the adult all over the enclosure and often perches close by.  Audubon staff sees that as a very positive sign, and they feel that although no positive diagnosis was ever made regarding the balance issue, Peace has a really good chance to be released in the Romeo-Juliet nest tree area when he is strong enough and his flying skills are adequate.

Unlike an eaglet fledging from the nest, Peace will have many opportunities for short flights and be able to practice his landing skills under safe conditions.

Here’s a video of Peace & Friend in the Flight Enclosure!