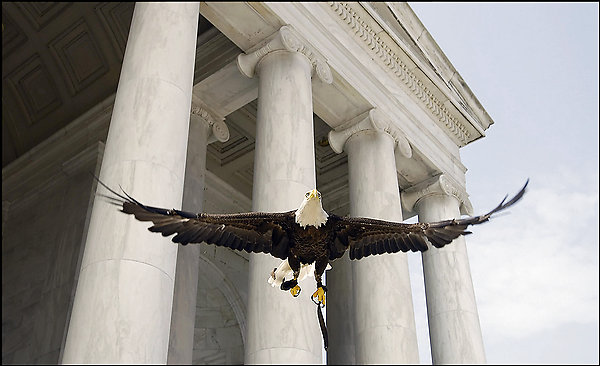 Challenger, a 19-year-old male Bald Eagle, flies near the Jefferson Memorial during a news conference with Interior Secretary Dirk Kempthorne, June 28, 2007, in Washington, D.C. Kempthorne declared that the national bird is no longer threatened with extinction after four decades on the endangered species list. Photographer: Carol T. Powers/Bloomberg News

The Bald Eagle was removed from the federal list of threatened and endangered species yesterday during a ceremony at the Jefferson Memorial, as officials and environmentalists celebrated the national symbol’s historic recovery.

“Today, I’m proud to announce that the eagle has returned,” Interior Secretary Dirk Kempthorne said in a conference call with reporters yesterday afternoon.

During the ceremony yesterday morning, Kempthorne signed paperwork “delisting” the eagle, which in 40 years has rebounded from 417 breeding pairs in the continental United States to about 10,000. The decision will take effect in a month, he said.

The Bald Eagle was listed as “endangered” in 1967 after a decades-long decline caused by hunting, poisoning and the eggshell-thinning effects of the pesticide DDT. The listing protected the birds’ habitat, and their recovery was helped by the ban placed on DDT in 1972.

Now, there are eagles in all of the lower 48 states, as well as Alaska, where the bald eagle population was never in danger. Hundreds of the birds can now be seen along the Chesapeake Bay and Potomac River, which offer large tracts of their favorite habitat, tall trees near shorelines.

Even after the eagle is removed from the list, it probably will receive some protection: Federal policies will still bar killing the birds or disturbing their nests. Environmentalists say they believe eagle populations will continue to grow.

For many environmental groups, yesterday’s announcement was a moment to savor. Hundreds of animals have been listed as endangered or threatened in the United States, but relatively few have recovered enough to be taken off the rolls.

“This is a great day,” Douglas Inkley, a senior scientist at the National Wildlife Federation, said during the conference call with Kempthorne. “This is a man-on-the-moon moment for wildlife.”

Not Such a Rare Bird Anymore
Scroll to top