Article reprinted with permission from The Center for Conservation Biology.

Aviation safety depends on knowing the location of hazards within the airspace. A great deal of time and effort has been spent to carefully map and mark stationary hazards such as tall buildings, towers, and mountains to inform pilots about their location and height. But all hazards are not stationary. Birds are one of the most significant categories of non-stationary hazards within the airspace and represent a potential hazard to aviation. One of the most dramatic events in recent years that brought public attention to this problem was when flight 1549 ingested Canada geese in both engines just after takeoff on 15 January, 2009 and was forced to make an emergency landing on the Hudson River. 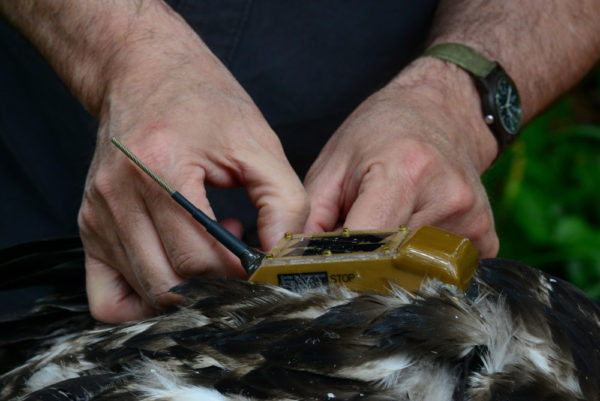 Bryan Watts adjusts the harness used to attach a solar-powered transmitter to a Bald Eagle near a military facility in Virginia. Photo by Reese Lukel, Jr.

Globally, wildlife strikes have killed more than 262 people and destroyed over 247 aircraft since 1988.  Factors that contribute to the increasing threat are the increasing populations of large birds and increased air traffic by quieter, turbo-powered aircraft.  In the United States, strikes have increased nearly 7.5 fold since 1990, reaching 13,795 in 2015.  During that year the estimated cost was nearly 70,000 hours of aircraft downtime and $229 million in equipment and operational costs.  Birds were involved in 98.5% of strikes and in terms of damage and risk, size matters.  For every 100-gram increase in body mass there is a 1.3% increase in the likelihood of aircraft damage if a strike occurs.  In eastern North America bald eagles, various species of geese and swans, and large gulls represent some of the greatest threats. 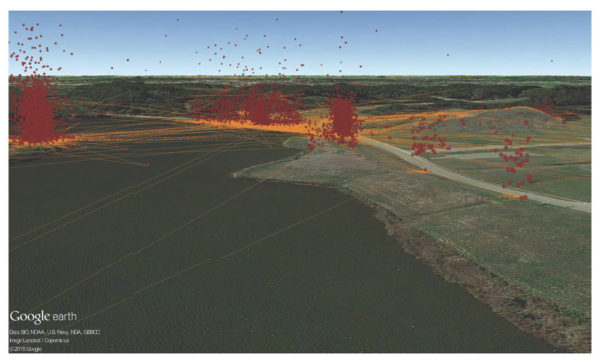 3D tracking pattern for a single Bald Eagle just off the north end of a military runway in Virginia. The columns of transmitter locations represent favored locations of the bird and the frequency of altitudes for those sites.

More than 70% of bird strikes occur below 500 feet and most happen around airports during takeoff or landing.  As with the incident on the Hudson, because strike risk is highest during low-altitude flights around airports, understanding the spatial patterns of bird distribution and movement in the vicinity of runways is a high priority to improve aviation safety.  Due to their large body size and the tremendous increase in their population within the Chesapeake Bay, bald eagles represent a growing concern to airport operators.  Understanding their distribution and movement patterns around runways may help to inform pilots of potential hazards and contribute to flight planning.

During the spring of 2016, CCB assisted the U.S. Department of Defense to deploy 12 transmitters on bald eagles near airports.  The Microwave, Inc. transmitters used provide a very high data rate and were programmed to deliver altitude.  The accumulation of bird movements and positions over time has revealed areas that are consistently used by eagles, as well as the vertical distribution of activity associated with the sites.  Mapping these bird hazard sites is similar to mapping fixed hazards like towers, with altitudes to avoid.  The information will hopefully be helpful in planning flight operations around the airfields. 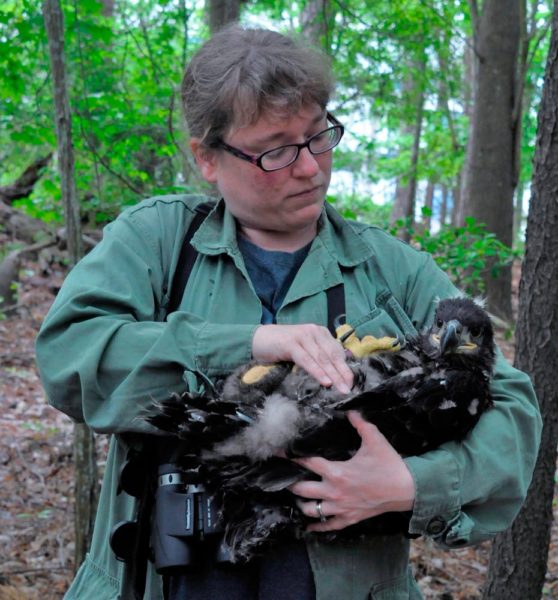 Michael Wright from the Environmental Program Division of Naval Air Station Oceana holds a Bald Eagle nestling ready for banding. The division is responsible for wildlife management on DOD lands and made the eagle investigation possible. Photo by Reese Lukei, Jr.

Hundreds of Bald Eagles Flock to Delta Fields in Vancouver, BC
Scroll to top