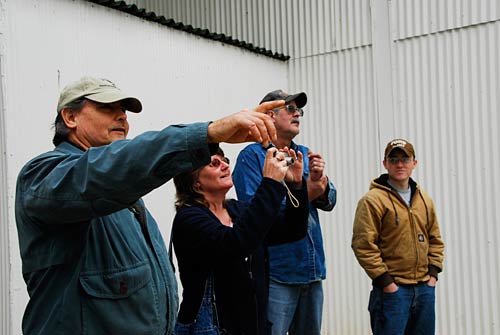 Pigeon Forge, TN — An American Bald Eagle shot in Tennessee earlier this year has a lot to be grateful for this Thanksgiving – it’s flying again. But so does the family who rescued it.

In late March 2009, the immature female eagle suffered multiple wounds from a shotgun and was found and rescued by the Hornsby family in the Cumberland County area of Tennessee (Daysville).

Both the Cumberland County Sheriff’s Department and the Tennessee Wildlife Resources Agency were notified by Cheryl Hornsby that she and her husband Jeff and son Jacob had found an injured eagle in their yard that could not fly. Those agencies responded and made sure the bird – now named ‘Cumberland’ – was picked up from the Hornsby home and received proper initial treatment.

“My son threw a blanket over the eagle to keep it calm by covering its eyes and to catch it,” said Cheryl Hornsby. “We fed it Special Kitty Ocean Perch brand cat food and the bird was hungry enough to eat the entire contents of the can. We also gave it some water.” 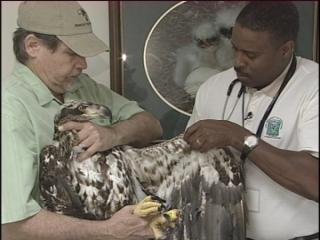 ‘Cumberland’ is examined by Dr. Mike Jones
of the University of Tennessee School of Veterinary Medicine

On April 4th, a careful examination by veterinarians at the University of Tennessee Veterinary Teaching Hospital in Knoxville revealed that numerous steel shot fragments had fractured the eagle’s left wing and also damaged its toe, tail, spine and shoulder. Many of those fragments could not be removed and still remain in the bird’s body today.

After the doctors at UT provided initial emergency treatment to the eagle, it was then brought to the American Eagle Foundation’s United States Eagle Center in Pigeon Forge (www.eagles.org) on April 8th for further rehabilitation. The eagle has been under the care of the AEF since that time going through various stages of recovery.

“We’re very grateful to the Hornsby family for taking the action they did”, said AEF president Al Cecere. “The eagle was seriously wounded and injured and would not be living today if they had not rescued it when they did.”

Mrs. Hornsby contacted Mr. Cecere several months ago to ask if she and her family could possibly visit the eagle ‘Cumberland’ at some point to see firsthand how it was doing. This week, as a special Thanksgiving gift, they were given that opportunity to see the bird for the first time since they found and rescued it 8 months ago.

“I have been trying to keep up with her progress” said Mrs. Hornsby. “This has been such a great joy for all of us and we are so thankful”. 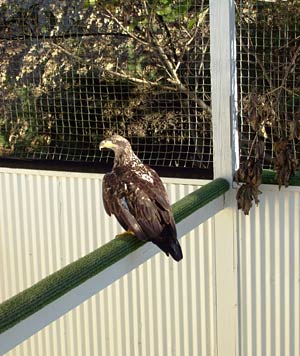 Cumberland shown in his rehab facility at the American Eagle Foundation.

This eagle presently resides in a 150 foot long flight enclosure at the AEF bird facility, where it can exercise its wings and practice flying. Due to the bird only having only 80 percent of normal range of motion in its left wing when it first came to the AEF facility, the initial prognosis of it returning to full flight was fair to poor.

However, since that time, the eagle’s wounds have healed and it has been flying increasingly better than it did when first placed in the flight enclosure. Now, the possibility of release back into the wild has increased – but no final determination will be made for a few more months.

The Cumberland County eagle shares the flight enclosure with two other Bald Eagles that were recently injured. One young eagle was found tangled in fishing line in the Bristol, TN area, causing significant damage to a wing. That immature bird is on the mend and already flying nicely. The AEF staff is still waiting for four new primary feathers to grow back in on the injured wing. The other Bald Eagle, an adult, suffered a broken leg, which has fully mended.

“If all three birds continue to heal, they may be ready for possible release in the spring of 2010 – the 25th Anniversary of the AEF”, said Cecere.

Several federal, state and private conservation groups, including the AEF, have joined together to offer a combined $5,000 reward for information leading to the conviction of the person(s) responsible for shooting the eagle from Cumberland County. To date, the shooter has not been found – but the reward still stands.

Bald Eagles are protected under federal law, and the poacher could face fines and up to a year in federal prison.

The public is urged to call the TWRA at 931-484-9571 if they can provide any information about who may have shot the bird.

“We were told so many times by people that we may never hear anything about her again,” said Hornsby. But the American Eagle Foundation has proven them all wrong.”