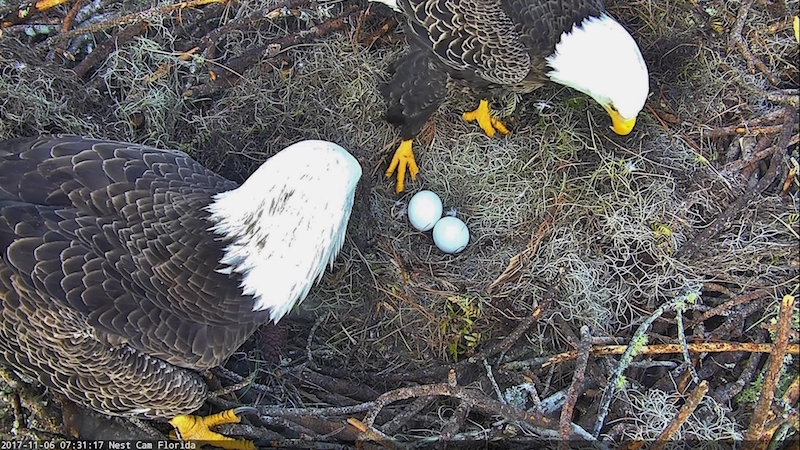 Romeo and Juliet with their 2 eggs

Be sure to tune in this week to catch a glimpse of their two precious eaglets pipping and emerging from their fragile eggs. 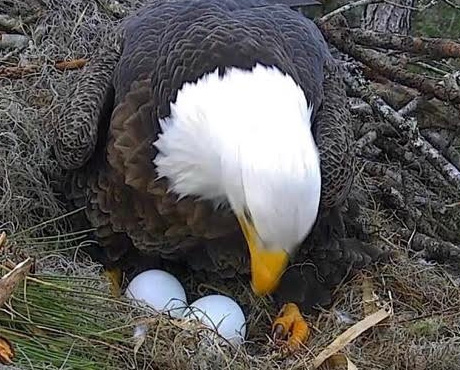 Juliet with her eggs.

Juliet laid the first egg on November 2nd and the second egg on November 5th. The average incubation period for an eagle egg is 35 days, so the American Eagle Foundation (www.eagles.org) hopes for the hatching process to begin for the first eaglet either today or tomorrow — followed by the second eaglet 1-3 days later.

“Eaglets have a sharp ‘egg-tooth’ on the tip of its upper beak, which is used to crack holes in its eggshell from the inside,” says AEF President Al Cecere. “The first hole made in the shell is called a ‘pip.’ It sometimes takes up to 24-48 hours for an eaglet to fully emerge from its shell after the first pip.”

The eagle pair and their well-constructed stick nest have survived several hurricanes over the years, including the most recent Hurricane Irma in September at the beginning of their 2017 nesting season. After laying their eggs in November, the eagles have also faced numerous attacks in their nest by a local wild Barred Owl while incubating and protecting their eggs.

Viewers who think they can guess the exact day and time that the eggs will hatch should hashtag #NEFLeaglecam on Twitter, Facebook, and Instagram. What are your predictions?

The “Name The Eaglets Contest” will be announced before Christmas, which will be made available to only members of the AEF. Eaglets will be named NE18 & NE19 until official names are determined!

About the American Eagle Foundation

The American Eagle Foundation (AEF) is a non-profit charitable organization established as a citizen’s effort in 1985, and receives no government funding.

Its’ mission is to care for and protect the USA’s living symbol of freedom, the Bald Eagle, and other birds of prey through the four pillars of Education, Re-population, Conservation and Rehabilitation. The Foundation’s headquarters are located in the foothills of the Great Smoky Mountains in partnership with the Dollywood theme park in Pigeon Forge, TN.

The AEF, in cooperation with the USFWS and PIKSEL, provides 24/7 LIVE streaming video of wild eagle activities. Public education and video cam operation relative to the Northeast Florida Nest are provided by the AEF in cooperation with numerous dedicated staff members and volunteers.