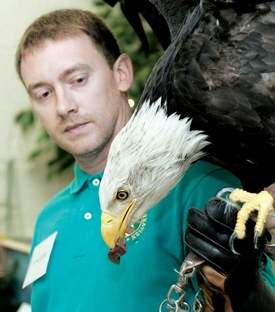 Kevin Buchanan, curator of birds for the American Eagle Foundation, gives Mr. Lincoln, a Bald Eagle, some beef heart as a treat during a visit to Melinda Guion’s third-grade class at Faiarview Elementary.

Mr. Lincoln suddenly flapped his wings in an attempt to take flight, and a classroom full of third-graders at Fairview felt the air move in what was likely their first up close encounter with an American Bald Eagle.

The majestic bird, named in honor of President Abraham Lincoln, made a guest appearance in Melinda Guion’s class Tuesday thanks to one class member, Sydney Rowell. Sydney gave a class report on the Bald Eagle, telling her fellow classmates how the bird of prey became our national symbol back in 1782 and how it almost became extinct mostly at the hands of humans. She didn’t end it there, though. She was able to bring Kevin Buchanan, curator of birds for the American Eagle Foundation and Mr. Lincoln to her school to make a presentation her friends won’t soon forget.

Buchanan explained how the eagle came to live at the Foundation in Pigeon Forge. Mr. Lincoln was found in poor condition in Michigan and was eating foods provided by people — fried chicken and bacon. “He never learned to hunt because people fed him,” he told the students. “He wouldn’t have survived in the wild.”

The American Eagle Foundation is a non-profit organization that provides care for eagles no longer capable of surviving in the wild. Some have been shot or otherwise injured. Some, like Mr. Lincoln, never learned the survival skills they need.

The foundation is located in Pigeon Forge and presents the Birds of Prey show at Dollywood and maintains the Eagle Mountain Sanctuary also located at the theme park.

The kids in Guion’s class spent the hour asking tons of questions about Mr. Lincoln and the other birds housed at the Foundation. How fast can he fly? How long will he live? Can eagles see in the dark? What do they eat?

“They can fly about 50 miles per hour in a straight line or over 100 miles per hour when they are diving,” Buchanan said. Eagles in the wild live about 25 to 30 years, he explained. In captivity, they can live 50 years or longer.

Eagles have poor night vision, worse than ours, the curator said. But in daylight their sight is phenomenal. “They can see a fish in the water from a mile away,” he told the group.

Buchanan also asked them questions, like how much did they think Mr. Lincoln weighs. They guessed upwards from 20 to 80 pounds.

The correct answer: 7.5 pounds. An eagle’s bones are hollow, Buchanan told them, and the feathers are extremely light. To make his point, he passed around some feathers and replicas of the eagle’s bones.

When it comes to the eagles’ diets, Buchanan explained they eat what they would in the wild — rats, mice and fish. He fed Mr. Lincoln a special treat of beef heart in the classroom to show how the bird uses his claws and beak to feed.

The size of an eagle’s nest (up to 2,000 pounds), and other fascinating facts were part of the presentation as well.

Mr. Lincoln will never be released into the wild, but the American Eagle Foundation has successfully bred eagles in captivity and then released the young. One such bird was set free at Douglas Lake here in East Tennessee and was located six weeks later near Lake Erie in Pennsylvania. The released birds are tagged so the Foundation can track their whereabouts. Buchanan said they have released 200 eaglets since the foundation was established.

At one time, the Bald Eagle was on the endangered species list but with efforts like that of the Foundation, the population has increased and the bird has been removed from that list. The insecticide DDT caused most of the eagle declines from the 1950s through the 1970s. The pesticide was banned in 1972. There are estimates that eagle nests in the lower 48 states have increased from about 800 in 1974 to over 10,000 in 2007. Alaska has the largest number of eagles with Florida second, Buchanan said.

Buchanan said the biggest problem facing eagles today is not the danger of being shot. It is the lack of habitat due to development and an increasing human population.

He believes strongly in education programs like this outreach into area schools. The children will not likely forget the encounter and the importance of maintaining the environment.

“What we do is entertain and educate at the same time,” Buchanan said. “It’s easy to educate people when they are having fun. They will remember.”