The Eagle Has Landed

Our national bird may no longer receive federal funding. 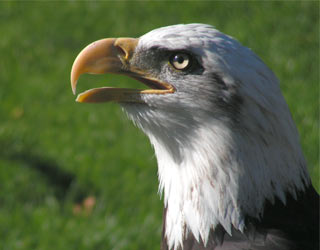 Americans view the Bald Eagle as our national symbol of history, freedom, and liberty. So in an age when national pride is valued so highly, it’s surprising that the U.S. Fish and Wildlife Service is considering ending the Bald Eagles’ protection under the Endangered Species Act.

A federal court has ordered the FWS to decide whether or not to remove the Bald Eagle from the ESA’s list of endangered and threatened species by no later than Feb. 16th. The Service first proposed delisting the bird in 1999, when it became clear that eagles had rebounded dramatically since the 1960s, when eagle populations were decimated due to habitat destruction, hunting, and the use of DDT.

The FWS says that populations are high enough now so that the eagle no longer faces extinction, and that federal money could be better spent on more critically endangered species. The Bald Eagle is also protected under two other federal laws, the Migratory Bird Treaty Act (MBTA) and the Bald and Golden Eagle Protection Act (BGEPA). Both laws prohibit the killing, selling, taking, or harming eagles, and the BGEPA also restricts disturbing Bald Eagles. If the eagle is delisted, populations would continue to be monitored for at least another five years.

“When we originally created recovery plans and goals, the goal to remove the Bald Eagle from ESA protection was about 3800 to 3900 nesting pairs,” says Valerie Fellows of the FWS.

It’s true that Bald Eagle populations have increased significantly. In 1963, there were only 487 active nests, while today there are approximately 7,066. But this number is still less than 10 percent of the original 100,000 nesting pairs that inhabited America more than 200 years ago. Some environmental groups, such as the American Eagle Foundation, are wary.

“The ESA protected eagle habitat,” says Al Cecere, president of the American Eagle Foundation. “The BGEPA does not provide the same protection. So I do have concern that some private landowners who have eagle nests on their property and desire to develop that property will have a greater advantage to get around the law and possibly threaten the livelihood of the eagles living on that property.”

Right now, the ESA sets out mandatory buffer zones around Bald Eagle nests to prevent landowners from encroaching on the bird’s habitat. Another concern is that with delisting comes a loss of funding from the FWS. Though the FWS says it does not spend as much on the bald eagle as it does on other species, last year the FWS spent more than three million dollars on Bald Eagle conservation.

But despite Cecere and the American Eagle Foundation’s concern, some environmental groups, such as Environmental Defense, support delisting. They believe that removing the Bald Eagle would allow federal money to be spent on more critically endangered animals and also prove that the ESA is successful in repopulating species.

“I think we’re kind of at a Catch 22 because the Bald Eagle is a high profile species and the ESA itself is endangered at this time in Congress,” Cecere says. “We need to prove that the ESA has some success stories. We don’t want our elected reps to think that we keep putting money to restoring species and then none of them ever come off the list.”

Regardless of what laws protect it, the Bald Eagle remains our national bird, and Cecere is hopeful that Americans will look out for its welfare.

“I don’t think everybody’s going to give up on the eagle all of a sudden because it is an important species to our country,” Cecere says. “It’s going to be their responsibility as well to keep an eye on their national bird. It’s all of our national bird so we all have to get involved in some way.”