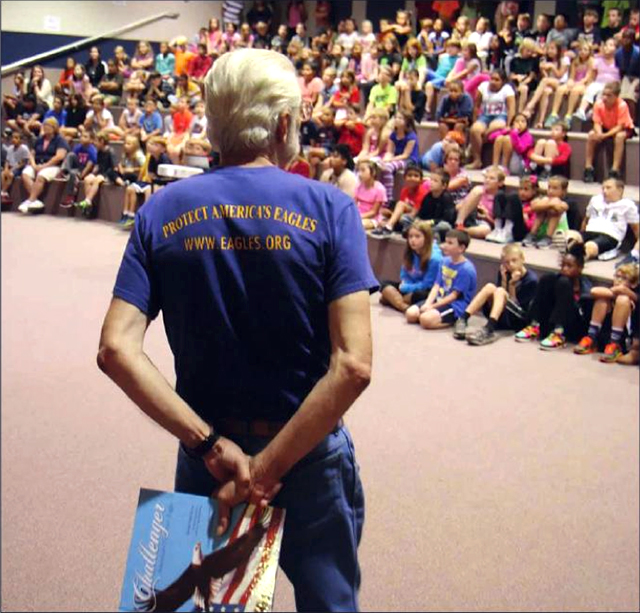 Jerry Blankenberg, a moderator with the American Eagle Foundation, shared his knowledge of American eagles with students at Lincoln Elementary in Gettysburg, PA, Thursday (Sept. 10, 2015), and shared a copy of Challenger: America’s Favorite Eagle with the school. Photo: John Armstrong/Gettysburg Times

Around 225 Lincoln Elementary School students could not contain their excitement Thursday afternoon when learning about eagles from an American Eagle Foundation moderator that some interacted with through web-based class lessons.

“You are the next generation,” Blankenberg told students, “It’s up to you to protect the eagles in the future.”

The American Eagle Foundation is a nonprofit organization created with the goal to educate people about the Bald Eagle and look out for the future of the bird.

As a thank you for having the organization at the school, Blankenberg presented Lincoln Elementary School Principal Cathy Harner with a children’s book about a popular mascot from the American Eagle Foundation, Challenger: America’s Favorite Eagle to include in the school’s library selection.

Students let out gasps when they heard and then stood to their feet with a roar of applause and cheers.

Fifth grader Dunn Kessel finds eagles unique because they have the biggest wingspan, he said after the assembly.

“It’s interesting how their wings are like our arms,” the 10-year-old added.

Nine-year-old Grace Stone, who is in fourth grade, is passionate about eagles for numerous reason, but she really likes how the mother eagle would do anything to protect her babies.

The special program Thursday was organized by third grade teacher Lisa Stoner, who enjoys educating students about eagles through various live cameras viewed from the Internet.

During some of the live views, students are able to ask questions to a moderator. At one point, Blankenberg was a moderator for Stoner’s classes and answered many questions from students in her classes.

Thursday was the first time Stoner met Blankenberg in person, she said with a smile.

The students only knew him by his first name,” she added. “I thought how neat it would be to do something like this ins Gettysburg.”

Blankenberg said the next part of the American Eagle foundation’s mission is to get more involved with schools throughout the U.S.

“It’s the best non-paying job for us volunteers,” Blankenberg continued.