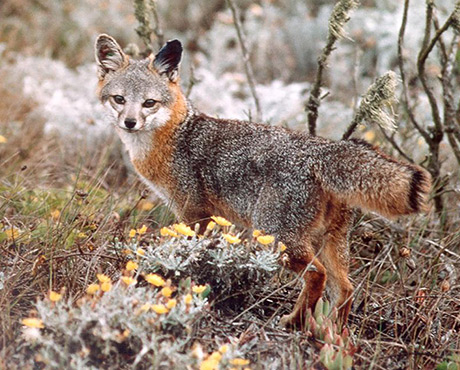 The Channel Islands are off the coast of Southern California and have a rich and unique history of wildlife found nowhere else on earth. The Channel Islands National Park is a remarkable place to visit and see nature as it once was. Today, Bald Eagles soar overhead and Island Foxes thrive. But there was a time when both of these species were nearly lost.

After WWII, the Montrose Chemical Corporation of California (producer of DDT) dumped massive amounts of waste into the county sewer system, ultimately going into the ocean to contaminate the fish that the Bald Eagles depended on for food.  The story of the fragile egg shells is well known – the eggs did not hatch, and eventually the Bald Eagles disappeared from the Channel Islands.

A herculean effort to bring back the Bald Eagle was successful, as shown in the documentary below.

A side note: In 2007, the American Eagle Foundation became the home of several pairs of Bald Eagles that had been instrumental in the repopulation of the Bald Eagles on the Catalina Island – a conservation effort by the San Francisco Zoo!  It is rewarding to think that the bloodline of AEF’s breeding pairs (Freedom & Faithful Spirit, Honor & Braveheart, and Volunteer & Hero) is still present in subsequent generations of Channel Island Bald Eagles!

What Did the Disappearance of Bald Eagles Have to Do with the Decline of the Island Fox?

The Island Fox is much smaller than its mainland cousins. It’s more the size of a housecat, weighing about 5 pounds. It once thrived on the Channel Islands, numbering in the thousands.

In 1999 a recovery program was established to save the island foxes from extinction. To preserve the species, the Golden Eagles had to be captured and relocated, and the feral pigs were successfully eliminated. At the same time, the Bald Eagles were reintroduced on the island, helping to restore balance to the ecosystem.

Introducing the Bald Eagle back into the ecosystem proved to be a natural deterrent to the colonization of the Golden Eagle. In 2006 a Bald Eagle was observed escorting a Golden Eagle out of its territory on Santa Rosa Island. Newly released Bald Eagles were also seen chasing Golden Eagles off a carcass provided for them.

In an environment where fish is the primary source of food for Bald Eagles, the Island Foxes are not as vulnerable from attacks from the sky—although an occasional fox pup is still taken by Bald Eagles (as documented by eagle cams on the islands).

To jumpstart a resurgence of Island Foxes, captive breeding was a necessity  and it was successful! The program started just before the 2000 breeding season. Known breeding pairs of wild foxes that had been fitted with radio collars were captured, while other individual foxes were paired based on observation of compatibility. These pairs became the nucleus for restoring a viable wild population. Through successive generations, inbreeding was kept at a minimum to ensure healthy offspring, which were eventually released back into the Channel Islands. It is estimated that 1800 Channel Island Foxes are now living in this pristine environment, enjoying their favorite foods, which include plants (especially loganberries), insects, deer mice, beetles, and cactus fruits.

The recovery of the Channel Island Fox has been one of the most successful and quickest restoration projects in the history of endangered species.

Restoring Balance in the Ecosystem

When non-native exotic plants and animals are introduced in fragile ecosystems wherein exist plants and animals that are found nowhere else on Earth, many rare species can be pushed to the brink of extinction, including the Channel Island Fox.

The Island Fox population has been downlisted from endangered to threatened in 2016, but still faces challenges caused by pets being brought to the island by visitors. To protect the foxes from canine diseases, a percentage of the foxes are actively vaccinated against rabies and canine distemper. The foxes continued to be monitored by radio tracking to make sure the population remains healthy.

Part of the mission of the American Eagle Foundation is to advocate for the environment, for the animals that share this planet with us, and for the wild spaces that still remain.