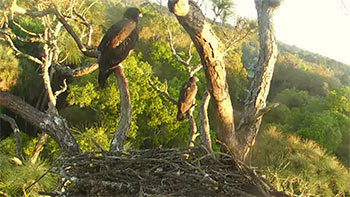 These two young Bald Eaglets, hatched and raised in the Northeast Florida nest (NEFL) by parents Romeo and Juliet were “our” babies – they captivated our hearts, and filled us with laughter, joy, and wonder.

From the very first pips, and their entry into our world just in time for Christmas, we were emotionally engaged in every step of their growth and development. We marveled at their new skills: they could balance better; they played with sticks; they groomed each other, and nestled tightly together while resting and sleeping. They learned to feed themselves! Their pin feathers grew in, replacing soft white down and grey fuzz. Before our eyes, they grew into full-sized immature eagles with dark brown feathers.

Sampson branched first with Delilah following shortly after.  For weeks, they both “wingercized” and perched confidently on branches in the nest tree, testing their strength and growing stronger.  Sam fledged first on March 8th – then 4 days later on March 12th, Del followed.  For weeks they practiced their flying and landing skills, soaring separately or sometimes together, returning at night to sleep in the nest tree.

Suddenly, on April 7th, Delilah left—at 15 weeks and 3 days old, she was gone; flying to other adventures, probably heading north and meeting with other juveniles along the Chesapeake waterway.  Sam lingered for 2 more weeks, and then, on April 22nd, at 17 weeks and 1 day old, he could resist the call of the wild no longer, and he flew away. Live long and prosper, eaglets. We wish you Godspeed and safe journeys.

Parents Romeo and Juliet have now left the nest for their annual summer vacation—maybe on the James River in Virginia.

It has been a marvelous adventure for all of us who watched this nest via the AEF’s HD video cam. Many of the special moments, videos and stills, can be seen on the American Eagle Foundation Facebook page.  We hope you will visit and “like” our page!

Stay tuned for the 2014-2015 Northeast Florida “Eagle Nest Cam” experience. Romeo and Juliet are expected to return to their Florida nest in September 2014 to breed and hopefully raise another beautiful family. 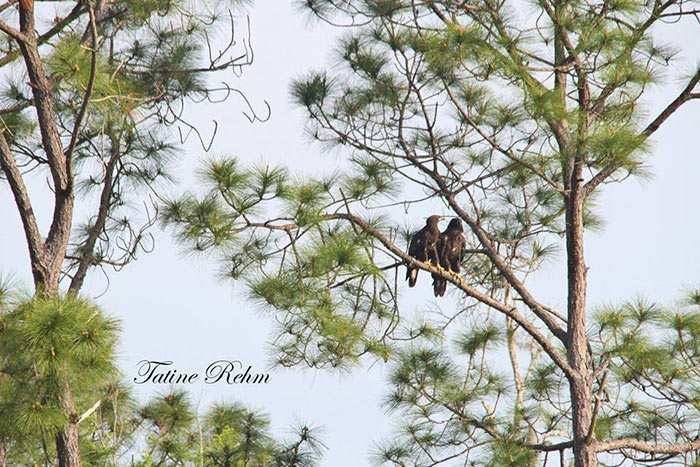 Bald Eaglets Samson and Delilah, seen together for the last time near their nest in NE Florida – April 7, 2014
Photo by Tatine Rehm