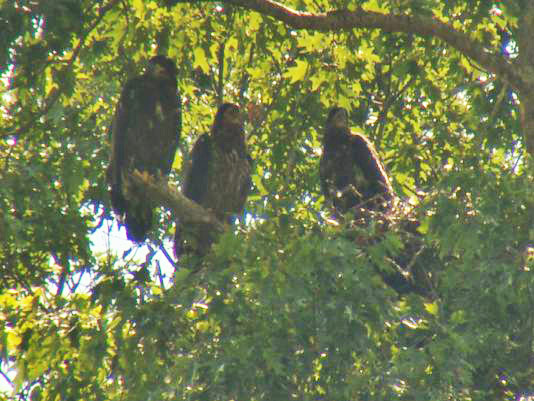 (WBIR – Sevier County) An Eagle released into the wild by the American Eagle Foundation back in 2008, is now back home to start her own family.

They’ve nicknamed her ‘Lady Independence,’ in honor of her mother ‘Independence’ who is one of the foundation’s non-releasable Bald Eagles.

Dollywood’s Eagle Mountain Sanctuary serves as a home for both of Lady Independence’s parents, ‘Independence’ and ‘Franklin,’ who have raised 29 eaglets in the last 13 years.

And now their daughter, Lady Independence, has returned to Sevierville with a mate and set up a nest of her own nearby.

Currently, she has three eaglets that are about 12 weeks old and could start flying soon.

The foundation is both surprised and excited to see a previously released bald eagle return to the habitat.

“It’s just so good, such a great feeling to know that some of that youngsters have survived long enough to come back to this area, build their own nest, and raise true Tennessee eagles right here in the heart of Sevierville,” Al Cecere, founder of the American Eagle Foundation, said.

To get a special look at the nest of Lady Independence and her parents, you can watch the American Eagle Foundation’s Nest Cam website or visit the Eagle Mountain Sanctuary at Dollywood.
[/av_textblock]