Rehabilitated Bald Eagle was released at Lillydale Campground on Dale Hollow Lake. Several agencies participated in this eagle’s rescue and recovery. The release is dedicated to American’s Freedom Fighters. 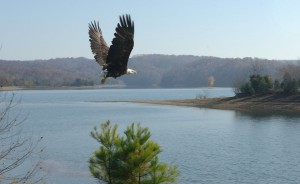 American Eagle Foundation (AEF), U.S. Fish & Wildlife Service (USFWS), and Tennessee Wildlife Resources Agency (TWRA) officials released a rehabilitated adult Bald Eagle on Thursday, November 9, 2006 at the Corps of Engineers’ Lillydale Campground on Dale Hollow Lake near Livingston, Tennessee. The eagle has been named “Patriot” in honor of the brave and courageous men and women of the U.S. Armed Forces that are fighting terrorists and defending freedom around the world.

“The release of this majestic bird is yet another reminder of the importance of eagle conservation in the U.S. and all those Americans who have died in the name of Freedom,” said AEF President Al Cecere. “The efforts of the American Eagle Foundation, U.S. Fish & Wildlife Service, and Tennessee Wildlife Resources Agency continue to ensure that future generations will have the opportunity to see and enjoy the majestic eagle as it flies across America’s heartland.”

On January 23, 2006, the female Bald Eagle was found and caught by wildlife officer Andy Barlow of the TWRA, who responded to a citizen’s call. Mr. Dolph Neatherly of Alpine, Tennessee, in Overton County had called the TWRA about “a Bald Eagle just standing in his pasture.” As Barlow approached the bird, it flew a short distance with difficulty and landed near a patch of woods.

Wearing thick leather gloves, the officer was able to catch the bird and immediately transported it to the Ragland-Riley Veterinary Clinic in Livingston for an initial checkup. Dr. Ragland found no visible wounds or broken bones. However, it was somewhat addled, calm and tame acting.

The bird was tube fed and kept overnight, then released to the care of Lee Barclay, Director of the Upper Cumberland Wildlife Rehabilitation Center and a U.S. Fish & Wildlife Service employee in Cookeville. Barclay offered the bird raw chicken gizzards and lean beef, which after initially refusing, it ate readily. It then ate a second helping that also included a large mouse.

The following day, Barclay transported the eagle to the American Eagle Foundation (AEF) center in Pigeon Forge, Tennessee, at Dollywood. With facilities designed to house and care for eagles, the AEF staff was able to complete the rehabilitation process.

In cooperation with Dr. Mike Jones of the University of Tennessee Veterinary School, the bird was reexamined and determined to have a serious concussion. Initially the bird would not eat at the AEF facilites and the AEF staff had to force feed it. After a couple of weeks, it began to eat on its own again, and eventually began to come out of the concussion and act like a wild eagle again. The eagle has been in a 150-foot flight cage at the AEF’s facility for several months, and has been responding and flying very well.

This eagle was scheduled for release in September 2006, but a toe injury occurred the day before the scheduled event. It has subsequently been under the care of the AEF staff and University of Tennessee veterinarians at the AEF facilities, and is now deemed by the veterinarians to be ready for release.

According to Cecere, and eagle can live up to 40 years in the wild. Many die as a result of injuries from gunshot, power lines, motor vehicles, and traps, as well as from ingestion of man-made poisons and contaminants.

The AEF has released many dozens of eagles into the wilds of Tennessee. Headquartered at Dollywood in Pigeon Forge, Tennessee, and home to more than 70 birds of prey, the AEF is wildely recognized as a national leader in Bald Eagle conservation, recovery and public education. Established in 1985, the federally and state licensed organization operates the largest Bald Eagle breeding facility in the world. The AEF is dedicated to the care, recovery and protection of the Bald Eagle and its habitat and has educated millions of people from coast to coast.

Bald Eagle Fights for Foothold After Being Stripped of ESA Status

Are Eagles Ready to Leave Nest?
Scroll to top