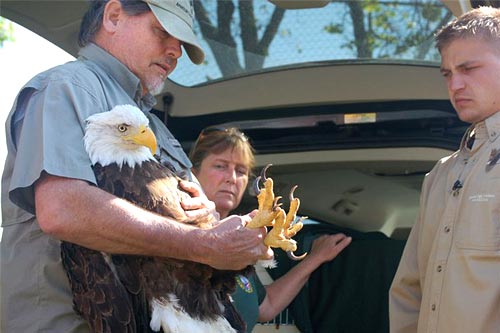 Al Cecere, founder and president of the American Eagle Foundation, wrestles with Tiny, a mature Bald Eagle who was released back into the wild on Friday. Watching is Karen Wilbur, the foundation’s assistant operations manager, and Timothy Sterbens, a U.S. Ranger, who assisted in the release. Photo by Bob Fowler

KINGSTON – For the Bald Eagle named Tiny, Friday marked a return to freedom in the wild after months in captivity.

Tossed aloft by a U.S. Ranger bound for Afghanistan, the bird exploded skyward in a burst of feathers before soaring majestically over Watts Bar Lake.

“That bird’s a real fighter. He’s a struggler and a fighter,” said Al Cecere, founder and president of the American Eagle Foundation. “It’s always wonderful to set an eagle free.”

Pontello said he couldn’t believe it at first, but there it was, huddled under a privet bush off Lawnville Road – a mature bald eagle.

The raptor’s left leg had been shattered in six places, but luck was on the big bird’s side, said TWRA Officer Dan Hicks.

Pontello is a falconer – someone who trains birds of prey as a hobby – and he knew exactly how to capture and hold the wounded eagle without injuring it further, Hicks said.

That launched an intensive effort to heal Tiny that included veterinarians, volunteers at Clinch River Raptor Center in Clinton and the American Eagle Foundation.

A steel pin was inserted during intricate surgery in the eagle’s hollow femur so it could mend, and a regimen of antibiotics was given as it began to recuperate at the center in Clinton Middle School.

Anglers and hunters did their part, donating fish and deer hearts and livers to assuage Tiny’s ravenous appetite.

The eagle has been in a 150-foot-long flight exercise enclosure at the American Eagle Foundation’s headquarters at Dollywood in Pigeon Forge for some two months, Cecere said.

There, the bird was fattened up to 12 pounds on a diet of trout and live rabbits – which also served as a refresher course in hunting, Cecere said.

While Bald Eagles are making a tremendous comeback in the lower 48 states, Cecere said, they still face challenges.

Bald Eagles still lose out when they have run-ins with humans, he said.

Of the three other eagles recuperating at the foundation’s headquarters, one was shot and the other was injured when it became entangled in fishing line, Cecere said.

U.S. Army Ranger Specialist Timothy Sterbens, soon on his way to Afghanistan, was given the task Friday of setting Tiny free.

“It was fantastic,” said Sterbens, who is Cecere’s son-in-law. “I was absolutely honored.”