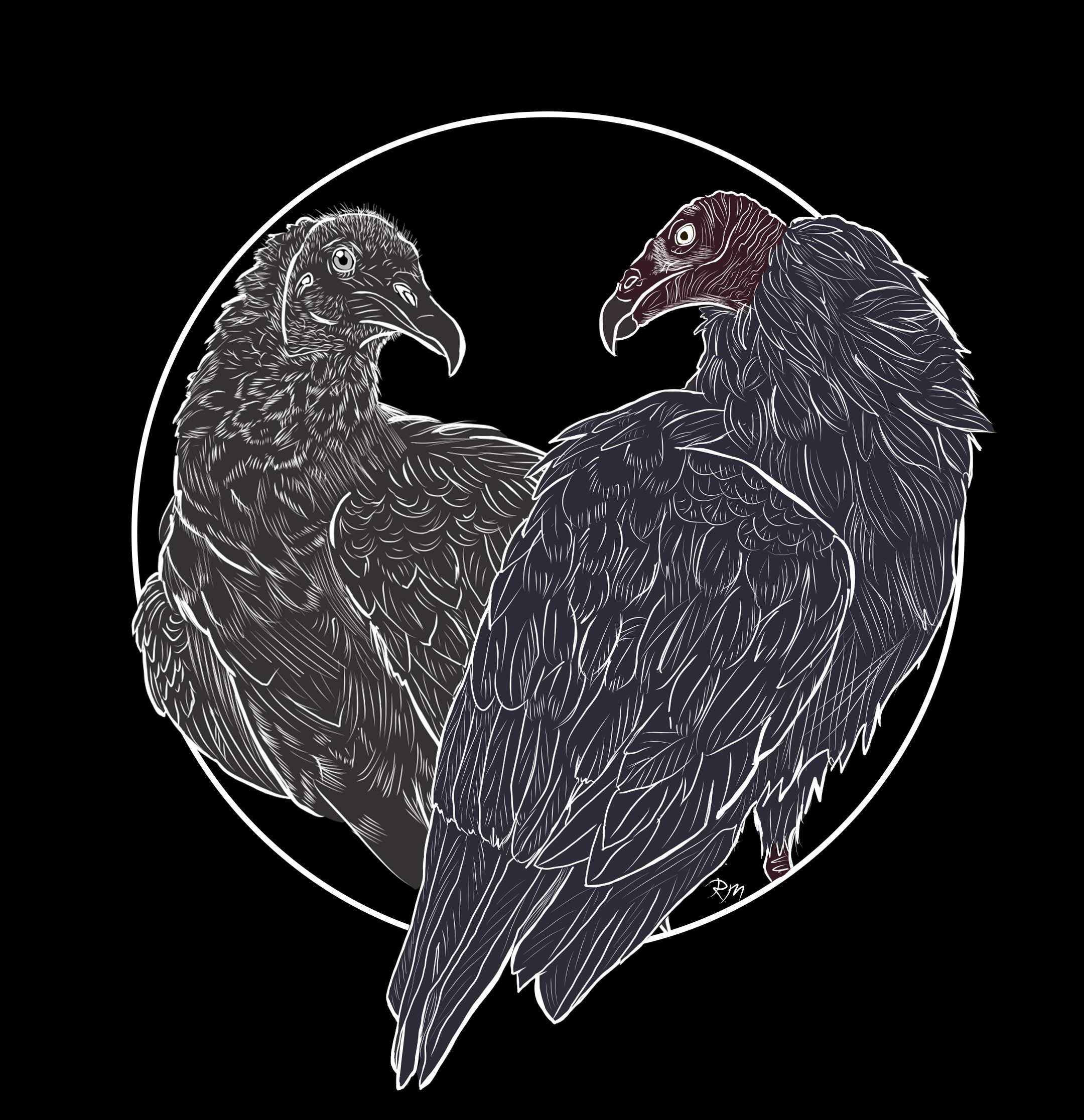 The eastern United States is home to two native species of vulture: the turkey vulture (Cathartes aura) and the black vulture (Coragyps atratus). Though both serve an essential role as nature’s clean-up crew, both turkey and black vultures could benefit from some positive PR. Some of the adaptations that make them so compelling are often misinterpreted and given ominous meanings.

Modern day, their population has recovered from the wide-spread persecution of the early twentieth century. This stands in stark contrast to the ongoing Asian and African Vulture Crises, which has resulted in 16 of the 23 species (70%) listed as threatened, endangered, or close to extinction. This devastating decline has only happened within the past thirty years (Vulture SAFE, 2017).

Though tragic, the sudden decimation of international vulture species underscores how fragile our local population’s stability truly is, and it provides us with a cautionary tale of the impact that vultures’ absence can create. The estimated human health cost of vultures’ decline is $1.5 billion annually (Ogada et al., 2011). Vulture conservation is a matter of ecological, human, and economic health; in areas where vultures are absent, contagious diseases—like rabies—run rampant.

As their populations grow, so too do reported incidents of human-wildlife interactions. This page seeks to provide a comprehensive, research-backed resource for all things vulture, including everything from their natural history to effective ways of managing human-vulture interactions. 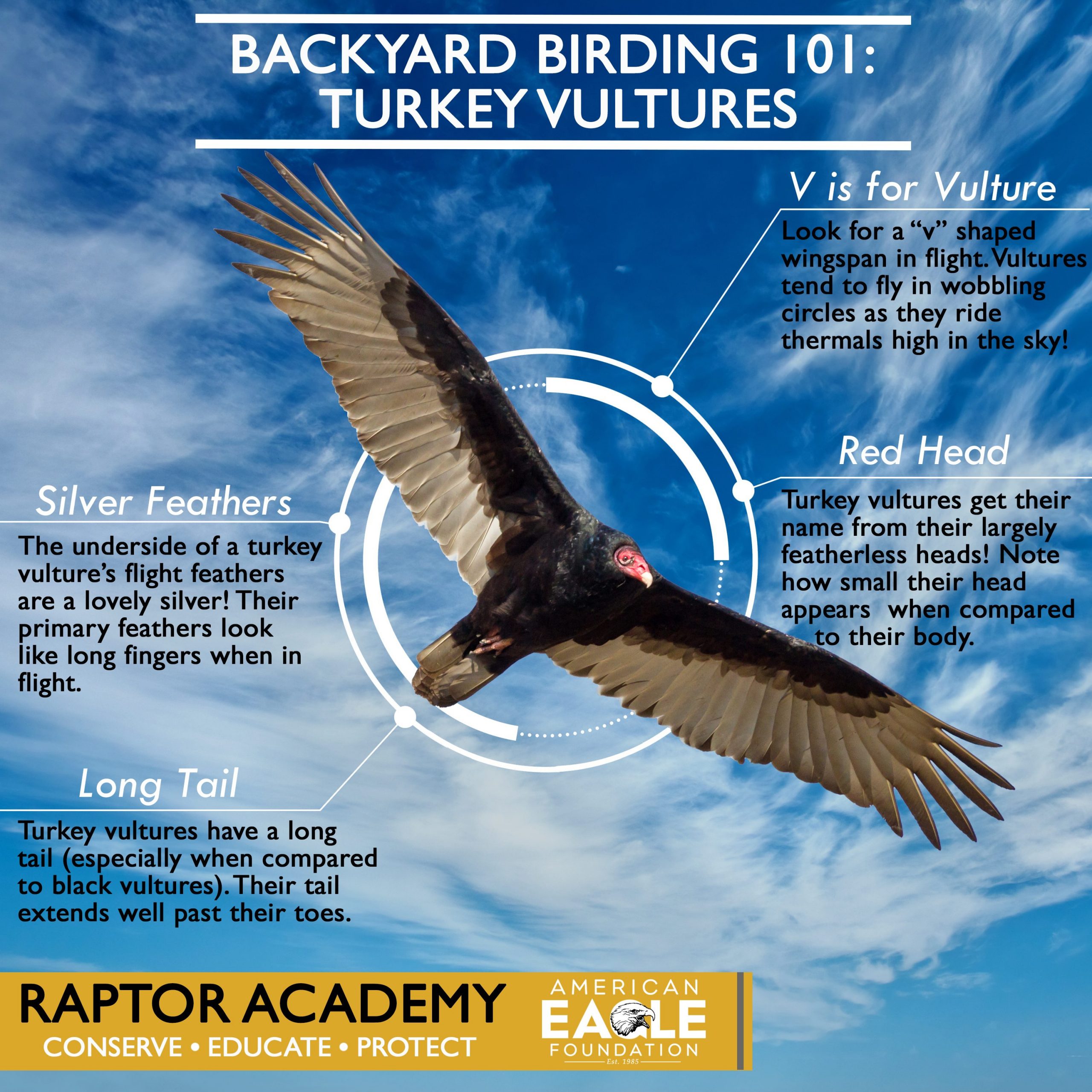 Turkey Vultures are most readily identified by their bright red head, which causes them to somewhat resemble wild turkeys.  These birds lack the wattle of wild turkeys, but their facial structure, feathers, and wrinkles are unique between individuals. Their plumage is also stunning, appearing as a rich, caramel-limned chocolate in some lighting and an iridescent aura of blues and purples in others.

Their impressive wingspan and effortless soaring make them highly visible, as does their iconic circling and wobbling flight style. When in flight, look for silver coloring on the bottom of their flight feathers and a v-shaped silhouette.

These birds are almost exclusively scavengers, though they’ll also dine on produce in the wild. The Cherokee people often refer to this bird as the “Peace Eagle” in homage to how these vultures only consume that which is already dead. Even their scientific name means “breezy cleanser” or “golden cleanser.”

Most remarkable is their highly developed olfactory sense, which allows them to smell carrion from hundreds of feet away, even through forest canopy. This acute sense of smell is unique to the Cathartes genus. It also means that these birds have an entourage when looking for food, and it’s not uncommon to see black vultures and turkey vultures mingling as a result (Kirk et al., 2020).

If you want to experience the dignified charisma of this species firsthand, check out George the Vulture on Instagram! 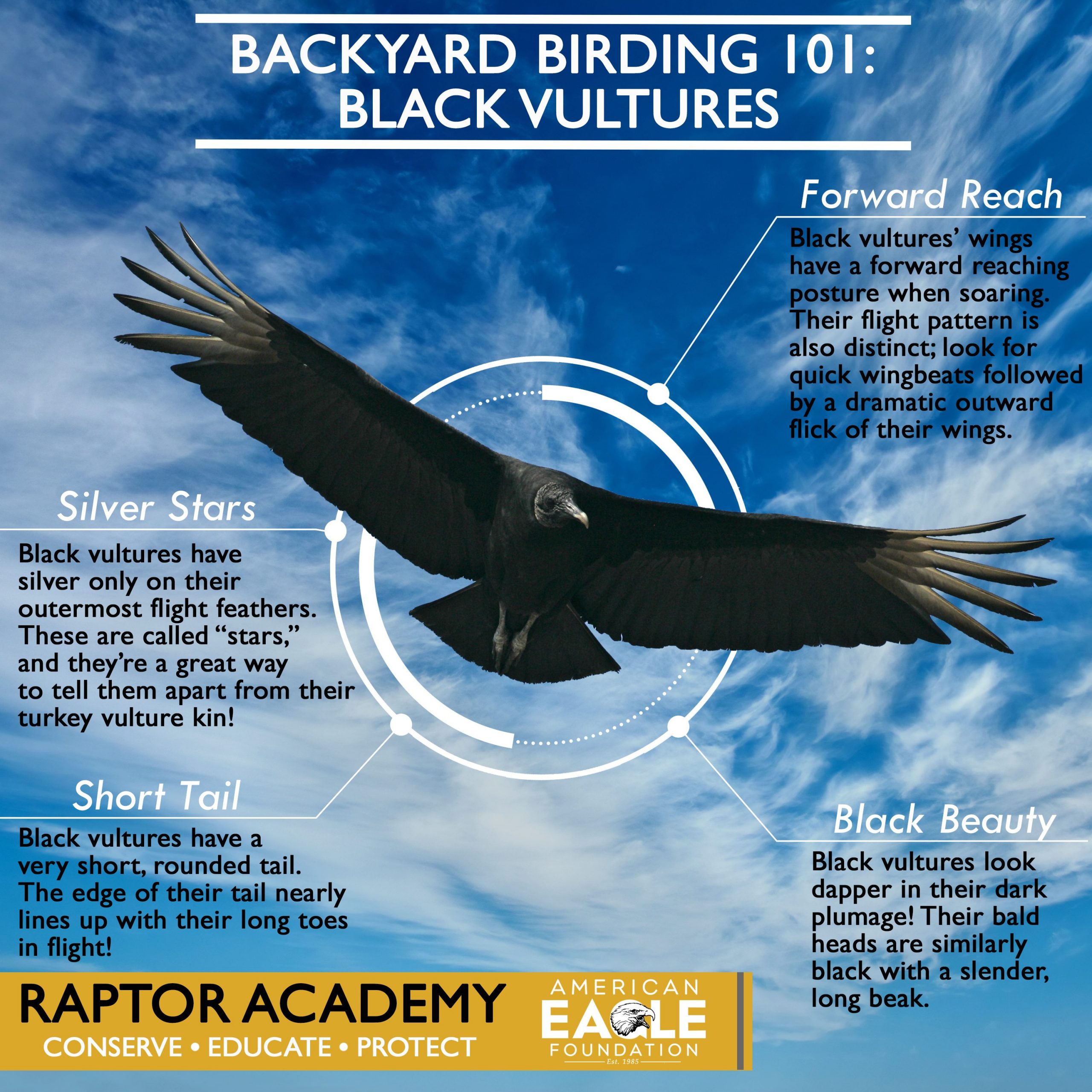 This vulture is always dressed for a black-tie rendezvous at the carrion café, thanks to their stately onyx plumage and gray-black heads. They are slightly smaller than their turkey vulture counterparts, and though they also are incredible fliers, they lack the same v-shaped silhouette of the turkey vulture and instead have a more forward-reaching posture in flight. They can easily be distinguished from flying turkey vultures by the silver “stars” on the tips of their wings.

Black vultures are most common in the southern and eastern United States with a range that expands through Central and South America. Their range is spreading. The reasoning behind this black vulture boom needs additional research, but food availability, recovery from pesticide-related decline, and shifting nesting/roosting habitat are some theorized causes (Buckley et al., 2020).

Though both native species use social roosting sites as information centers for group foraging, the black vulture is the most social of our native species. They retain strong familial bonds throughout their lives, utilizing both nesting and roosting sites as meeting grounds.  Squabbling and conflicts are usually directed at those outside of black vulture nuclear families. These black vulture “coalitions” are thought to provide advantages in scavenging and conflicts at carcass feeding grounds (Buckley et al., 2020).

Like turkey vultures, black vultures are primarily scavengers, though they have been reported catching and eating vulnerable animals or even fish, depending on food availability. There are populations of black vultures that are exclusively vegetarian, feasting on African oil palm fruit or coconuts damaged during harvesting (Buckley et al., 2020).

Highly inquisitive and intelligent, these vultures are keen on investigating the world around them with boundless zest and energy. You can witness their tremendous personality by getting to know Bash the Vulture on Instagram!

Many of the adaptations that earn vultures the reputation of “ugly,” “gross,” or “spooky” contribute to their cleanliness. The truth is that vultures are specially suited for quickly locating and eating carrion, which would otherwise be a breeding ground for disease and bacteria.

Their bald heads not only prevent rotten meat from sticking to them, but a recent study of their skin revealed a highly efficient microbiome of good bacteria designed for neutralizing disease. Similarly, the acidity of their stomach and their gut microbiome is equally efficient at processing disease. They are thought to have the strongest immune system of any vertebrate (Zepeda et al., 2018)

Vultures, like some species of storks, have a unique adaptation called “urohidrosis,” in which they excrete waste on their own legs. This adaptation helps them thermoregulate, but the uric acid within their urine is also thought to serve as personal “hand sanitizer” by rinsing off bacteria and keeping their feet clean. Though not especially glamorous, what comes out of these birds is far preferable to what goes in.

Vultures significantly reduce the risk of contagion being spread from carcasses to other animals—including humans. These carrion-eaters are a dead end for disease.

Do Vultures Wait for Something to Die?

Two vulture behaviors are commonly misinterpreted as these scavengers waiting for something to die: soaring and roosting.

If you see vultures spiraling in the sky, chances are that these birds are using thermals—or pockets of rising hot air—as a free, energy-efficient lift. It’s not uncommon to see turkey and black vultures gliding from thermal to thermal like trapeze artists of the sky. Though soaring may be a searching behavior in which vultures can use sight and smell to locate carrion, soaring vultures may also be departing their roost, heading back to their roost, or migrating extreme distances.

Communal roosts are used by both black and turkey vultures as information centers to help vultures locate food sources faster, and it’s also where vultures tend to rest or wait for the sun to warm the earth enough to create thermals. During the morning, vultures often sit with their wings outspread in what is commonly called the “horaltic pose.” This sun-worshipping pose helps vultures regulate their temperature, dry themselves, bake off bacteria, and straighten feathers.  It’s also thought that the sun may encourage mites or avian lice to surface, where they can then be preened off. Vultures’ sun salutation may also convert a component their feather oils to Vitamin D by increasing the surface area hit by the sun. As you can see, the horaltic pose has many theorized uses, but none of those include vultures hosting a funeral for dying creatures.

The truth is that the scavenging world is highly competitive, and “waiting” around for potential food to shuffle off its mortal coil is too great a risk. That’s vultures are adapted to finding—and picking clean—carcasses with great efficiency. The faster they locate carrion, the less likely they are to enter risky conflicts with coyotes or other predatory scavengers. This is a good thing! Those mammalian scavengers lack vultures’ disease-neutralizing adaptations.

Are Vultures a Threat to My Animals?

Vultures’ definition as a “raptor” has long been contested. In the early 2000’s, they were re-classified as being more closely related to storks than other raptors like hawks and eagles, but this decision was rather quickly reverted.

Vultures are subject to such heated debate because New World Vultures (like the black and turkey vultures) lack the strong feet and beaks of their raptor counterparts. Their flat, chicken-like feet are adapted to spending long stints of time on the ground; their talons cannot grasp or carry, meaning that they’re unable to carry off your pets. These birds are even incapable of carrying nesting material like sticks! 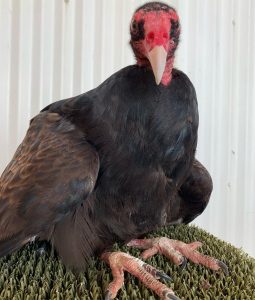 Their beaks are not anything to squawk about. Native vultures can’t easily penetrate animal hides and target softer bits—like the mouth or eyes—to break into their meals. Living, healthy animals are generally not stationary enough for vultures to overpower them.

Still, vultures have the reputation of killing and eating vulnerable livestock. Turkey vultures have largely been absolved of this behavior, but reports of black vulture depredation on cattle and sheep have been reported throughout their range.

More research is needed to better understand these reports.  Purdue University is currently researching this issue and seeking information from farmers who have reported losing livestock to vultures.

Both native species of vulture are protected by federal law through the Migratory Bird Treaty Act (MBTA), which prohibits the take, killing, capturing, selling, trading, or transport of native bird species without prior authorization by U.S. Fish and Wildlife Service (USFWS). Violation of the MBTA can result in steep fines (up to $100,000 for individuals) or even imprisonment.

Increasing reports of livestock depredation have resulted in a demand for depredation permits from USFWS allowing the lethal take of black vultures or the use of their carcasses as effigies. Lethal take permits offer “no assurance that this management approach will measurably decrease the effect of black vultures on livestock or reduce the concerns of livestock producers throughout the black vulture’s range” (Zimmerman et al., 2018). Even with other species, largescale, lethal-take efforts in agriculture have a history of ineffectiveness and a slew of shortcomings (Linz et al., 2015).

Not only do effigies constructed from vulture carcasses require time and money to acquire a permit, but they may not be as effective as advertised (Avery & Lowney, 2016).

Always consult your local state officials to ensure that these methods are permissible within your region.

Here are some research-suggested methods to protect livestock:

To deter roosting or gathering behaviors:

Lastly, we encourage our community to educate themselves on the value of vultures. In this spirit, we’ve included a complete list of our references below.

How can I help Native Vultures?

Changing the culture to protect our native vultures is not the group of one or even many organizations. It requires individuals like you to help shift widespread negative perspectives. You can help us protect our vultures by:

Together, we can protect our vultures. Use our hashtags #voiceforvultures or #endangeredwings to share how you’re being a voice for vultures!

For basic natural history information, we adore Cornell University’s All About Birds pages on Black Vultures and Turkey Vultures.