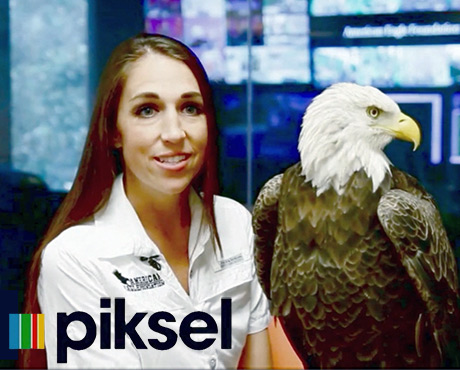 The American Eagle Foundation is a not-forprofit 501(c)(3) organization whose mission is to care for and protect the Bald Eagle, and other birds of prey through the four pillars of Education, Repopulation, Conservation and Rehabilitation.

The American Eagle Foundation (AEF) was one of the first organizations to use cameras to cover a bald eagle nest more than a decade ago. In the years since, they began making this footage available online, eventually as live streaming content. However, the provider they were using was low cost, low quality, and with AEF’s desire to do bigger projects, they decided to look to Piksel. AEF needed a broadcast grade partner for a project to stream the nest and hatching eggs of “Mr President” and “The First Lady,” a breeding pair of Bald Eagle that reside in the National Arboretum in Washington D.C.. High quality streams and stability were needed for the expected high profile and large audience. 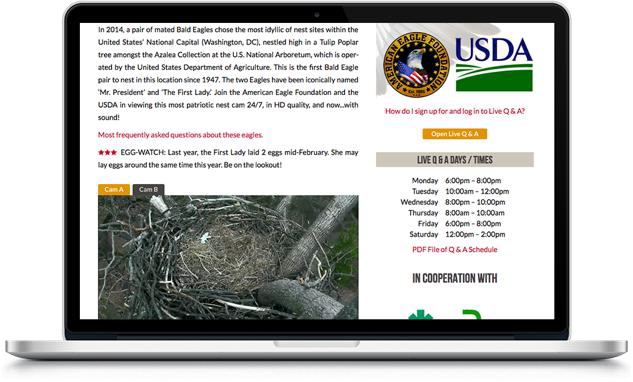 “We selected Piksel to live stream this very special Bald Eagles nest based on the reliability and quality of its broadcaster-grade streaming service, as well as its reputation for excellent, 24-hour support – not only for us, but for our viewers.” ~ Al Cecere – President

The other major technical challenge was in getting content out of the USDA’s network, which is a locked down network, out to their audience. So Piksel had to meet extremely high security and compliance requirements, and install technology on premise to be able to do that.

Once we had cleared USDA’s security, the first step was to install one of our encoders on the network at a USDA data centre. That pulls in the feed from the various nest cameras, encodes the two channels and delivers them to the CDN (provided by Akamai).

Finally, from a front-end perspective, AEF needed a player that could scale and handle the load, something that their previous provider was consistently unable to accomplish. Given that the streaming of Mr President and The First Lady was expected to attract so much attention, they needed the kind of reliability that Piksel’s HTML5 player provided – even at the heaviest peaks, the player never buckled under the load. 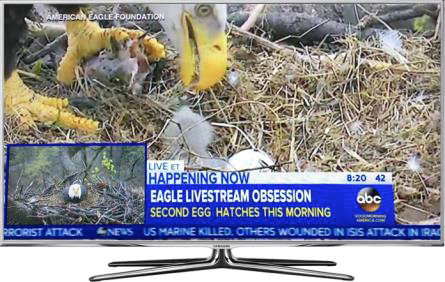 The project was an instant success, with tens of thousands of concurrent viewers viewing at a time, and millions of viewers per day. This was obviously a massive benefit to AEF, as the video was designed to drive donations, and they met their target comfortably. It was covered by national news media, including The Today Show and TMZ that covered not only the footage, but the runaway success of the video as well.

As traffic increased, more and more news sites began embedding the player into their own pages, which obviously began to draw traffic away from AEF’s website, where it was needed. At first, AEF allowed this to happen, as it extended reach, but then refer security was enabled on the HTML5 player that AEF was using, directing viewers to the AEF’s website, eagles.org, which drove massive amounts of traffic and fundraising to the Foundation.

There will be coverage of Mr President and The First Lady for the next season, as well as more locations in Florida and Tennessee. All coverage will be provided by Piksel, who they have entrusted to be their sole platform provider for live streaming video, and conversations are underway about other new filming techniques we might be able to deploy with them.
[/av_textblock]