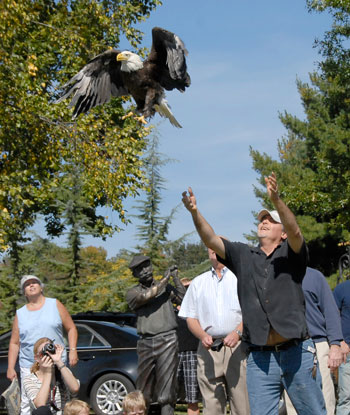 The American Eagle Foundation from Pigeon Forge released two birds of prey, a Bald Eagle and an Osprey, at the home of Wayne and Marti Huizenga on Boone Lake Monday afternoon. After Wayne Huizenga removed the hood from the eagle Al Cecere with the foundation released the bird.  (Lee Talbert / Johnson City Press)

As Wayne and Marti Huizenga poured glasses of champagne for their friends and neighbors on Boone Lake, staff members from the American Eagle Foundation at Dollywood were weighing and banding an Osprey in the shadows of Huizenga’s private helicopter that brought the birds from Sevierville.

“I’m friends with Al (Cecere) at the Foundation,” Huizenga said. “They released an eagle three months ago, so when they called and said they had two more birds I said, ‘Why not do it here so we can share it with some people.’ ”

“The Osprey was brought to us without an injury, but it was sick, wouldn’t eat, and had lost a lot of weight,” Cecere said. “We’ve had him for several months, most recently in our flight cage so he’s strong enough to be out on his own.”

He took the bird up to Marti Huizenga and instructed her on how to go about releasing it before he removed the bird’s hood and she tossed it into the air.

Startled at the bright light, the Osprey only flew about three feet before landing on the grass.

“It’s all right, he’s just getting his bearings,” Cecere said. After a few minutes the bird stretched its wings once again and took off, almost at once over the water. One of the spectators said it was headed toward their lake home.

He soon circled back and did a fly by, well out over the water.

The Bald Eagle was next, and this time Al and his assistant had a struggle on their hands, getting the big, strong bird out of its cage without causing new injury. This bird was brought to the foundation with a broken wing and had to be kept in cage rest for a month while the fracture healed. Then he, too, was released into the flight cage.

“Both these birds are mature birds and they know how to hunt,” Cecere said. “The Osprey can actually dive into the water to take a fish, while the eagle flies over the water and snatches the fish. He doesn’t go into the water unless he gets a fish too big to lift up.”

This time he took charge of the release, holding it after removing the hood until its eyes were adjusted to the light, and then tossing it into the air.

With its gleaming white head and tail and massive yellow beak, the eagle drew gasps from the crowd as it got its wings going and headed out over the lake.
“Just make sure he stays around here,” one resident said.

“There’s no guarantee. Eagles fly all over the United States,” Cecere said. “With the white head and tail we know this is a mature bird, at least five years old. Since they mate for life it will probably try to return to its home range and mate.”

He said that the young eagles that they hack and release at Dollywood are given wing tags so their numbers can identify them in case they are photographed. One such bird was photographed in New York, then in New England and Ohio within a matter of a few months.

About 15 years ago, as eagles were beginning to return from the brink of extinction, this paper joined other sponsors in funding a hacking site on South Holston Lake, raising young birds from Wisconsin, teaching them how to fly and then releasing them in the hope some would return to the area and nest.

The program was a success, and there are now active nest sites scattered throughout the waterways of East Tennessee. There is a high mortality rate of young birds, especially when they encounter man.

Some are shot, others fly into utility wires or windows.

The work of the American Eagle Foundation involves rescuing these birds, dealing with their health problems and re-releasing them into the wild.