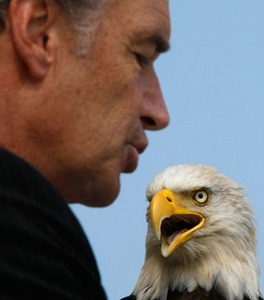 WASHINGTON – JUNE 28: Challenger, a Bald Eagle, looks at Secretary of the Interior Dirk Kempthorne while he announces the removal of the Bald Eagle from the endangered species list June 28, 2007 at the Jefferson Memorial in Washington, DC. In 1963 there were barely 400 nesting pairs of Bald Eagles in the lower 48 states; today there are more than 10,000 nesting pairs. (Photo by Win McNamee/Getty Images)

Thirty-five years ago, a visitor to John Heinz National Wildlife Refuge at Tinicum would have been hard-pressed to see a Bald Eagle.

Today, acting refuge manager Gary Stolz regularly spots them fishing in tidal pools. He has even seen courtship displays, where the eagles lock talons and tumble through the sky.

Yesterday, Interior Secretary Dirk Kempthorne announced that the national symbol had rebounded so thoroughly that it will come off the endangered-species list in a month.

In the Delaware Valley, signs of that recovery are everywhere.

Eagles also nest in Montgomery County and near Phoenixville, within six miles of the King of Prussia Mall.

Last winter, birders discovered a nest at the Philadelphia Navy Yard. It was the first nest within city limits in two centuries. The birds later abandoned it, but wildlife officials expect them to try again next year.

Many heralded the eagle’s delisting as a sign that the Endangered Species Act works and as proof of what a healthier environment can revive.

“Simply put, it says if we provide birds with clean air, clean water, clean food, and a place to nest, they will do well,” said Keith Bildstein, director of conservation science at Hawk Mountain, north of Reading.

The mountainous area has a natural gap that funnels migrating eagles and other raptors. Photos from long ago show hunters gunning them down as they winged by.

Starting in midcentury, eagle numbers declined further because the pesticide DDT accumulated in their tissues and caused the birds’ eggshells to thin and break.

But now, so many eagles fly past Hawk Mountain that birders with binoculars line the ridgetops every fall.

In the 1970s, they might have seen only 18 Bald Eagles in a fall migration. The annual average over the last decade is 162 of the majestic birds.

Pennsylvania now has at least 120 nesting pairs, up from a low of only three in 1983. That year, the state Game Commission began capturing eaglets from wilderness nests in Canada and releasing them in the state.

New Jersey has 59 nesting pairs, up from a low of one throughout the 1970s.

Despite the national gains, eagles remain listed as “threatened” in Pennsylvania and “endangered” in New Jersey. Officials in both states said they might reconsider.

“But we have ongoing concerns for our population,” said Darlene Yuhas, a spokeswoman with the New Jersey Department of Environmental Protection.

Wildlife officials are worried about human disturbance and habitat destruction, especially in populous areas such as Southeastern Pennsylvania and New Jersey.

The eagle was first proposed for delisting in 1999, when President Bill Clinton stood on the lawn of the White House with a captive eagle named Challenger to declare success.

But it took eight more years to sort out whether the protections remaining under two other federal acts – the Bald and Golden Eagle Protection Act and the Migratory Bird Treaty Act – were adequate.

Still to be ironed out are the specifics of an ongoing monitoring system and a permitting process to allow landowners to develop their properties.

Kieran Suckling, policy director of the Center for Biological Diversity, which has sued the U.S. Fish and Wildlife Service more than 200 times, trying to force it to list species, called the eagle’s comeback a “bittersweet victory.”

Suckling said the Endangered Species Act mostly helped only charismatic species – such as the eagle, the peregrine falcon, the American alligator, and the brown pelican – leaving others to slide toward extinction.

“In this bias toward the charismatic species, we’re really missing the fundamental biological role of the small things that actually run the world,” he said. “It’s not Bald Eagles that run the world. It’s plants and insects.”
[/av_textblock]