Jim Weller is a member of The Eastwood Eagle Watchers, based in Dayton, Ohio, and a  friend of the American Eagle Foundation.  For several years, he has monitored a nest built by Bald Eagles Jim & Cindy, and has documented their nesting seasons with a Blog Post, photos, and poems – to the enjoyment and delight of a vast audience!

Jim’s loyal fans shared his grief when Bald Eagle Jim lost his long-time mate, Cindy, in November 2016, just as the new nesting season was beginning. It was a difficult time for everyone who follows that nest (aptly called “The Treetop Palace”), and a reminder that in Nature, nothing is certain.

After Cindy’s death, Jim did the predictable thing and searched for her, and when his searches proved to be in vain, he returned to his favorite perch and waited. A young female Bald Eagle chased after him for awhile, but then disappeared. Around the beginning of the new year Jim was seen in the company of a more mature female and their bonds began to grow—and now she has stolen Jim’s heart! Her name is Hope.

In his latest blog, Jim Weller wrote, “This week I have had the privilege of watching Jim and Hope as they all but finished the preparation for this year’s eggs. After completing their daily work on the nest they danced their way across the sky in wide, independent circles that intersected with flips and twirls where they reached out for one another, talon to talon. As I watched those wide circles seamlessly merged into a singular arc of two eagles flying side by side, wingtip to wingtip. My human ears cannot comprehend the silent melody to which they dance but they embrace the age-old refrains with complete ecstasy, becoming totally enraptured in one another’s presence. Simply amazing! Eloquently breathtaking! Purely inspirational!”

As he watched these two soaring above, Jim grabbed a piece of paper and put thoughts to words – in this poem of hope and promise. He has graciously allowed us to share it with you, our readers.

Way up high in a cloudless sky a love story unfolds… 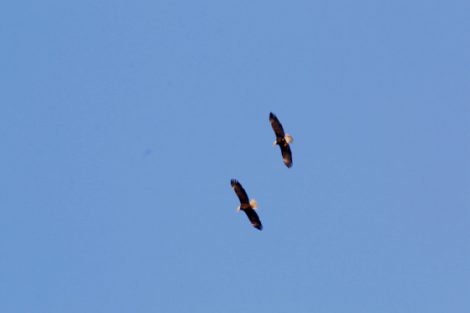 Way up high in a cloudless sky a love story unfolds,
On gracious wings where two hearts sing despite the winter’s cold.
A majestic eagle and his mate frolic in the air,
Enraptured by each other’s form, they dance without a care.
Each movement brings them closer and strengthens lifelong bonds
That will see them through tomorrow, the next day and beyond.
The bonds that they are forming will be tested day by day,
But through testing they’ll grow stronger
While they strive to find their way.
Together they will conquer!
Together they will cope!
Together they’re victorious!
Together they have hope!
High across the heavens they dance on outstretched wings
While, here below, I stand in awe as my spirit soars and sings!

Hope is the new Queen of Treetop Palace 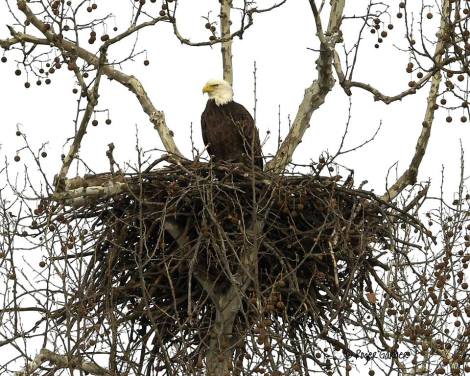 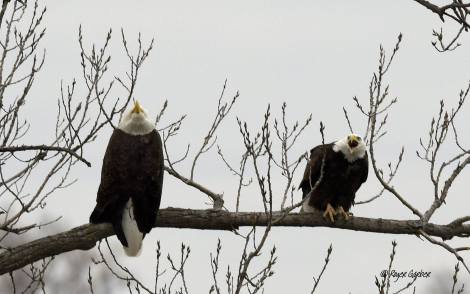