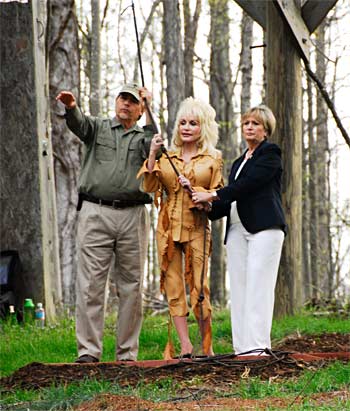 Dandridge, Tenn.–For the first time, entertainment legend Dolly Parton had the opportunity to help release a Bald Eaglet into the foothills of the Great Smoky Mountains, after it had been rescued as a fallen nestling from a wild nest and raised by the American Eagle Foundation (AEF) headquartered at her theme park Dollywood.

Parton, along with Al Cecere, Founder of the AEF and Gloria Eskridge, Associate Director for Sales & Marketing for the United States Mint, opened the nesting cage door at 8 a.m. on Thursday at the AEF’s hacking tower located on Douglas Lake.  The eaglet was named ‘Liberty’ by Parton.

The 14 week-old eaglet was sent to the AEF (www.eagles.org) by the U.S. Fish and Wildlife Service after it fell from its wild nest on Sanibel Island in Florida earlier this year.

“Dollywood and the American Eagle Foundation have an incredible partnership,” Parton said just before the eagle took flight. “It’s a real blessing to be able to assist the foundation in its work to rescue these breathtaking birds.”

The AEF was established in 1985 and came to Dollywood in 1991, which is home to the organization’s 1.5-million-cubic-foot Eagle Mountain Sanctuary and its Wings of America bird of prey show.  Dollywood built and maintains additional facilities for the AEF both on and off the park.  A recently completed $250,000 investment at Dollywood includes facility upgrades and a new raptor house where park guests can get an up-close view of various birds of prey. 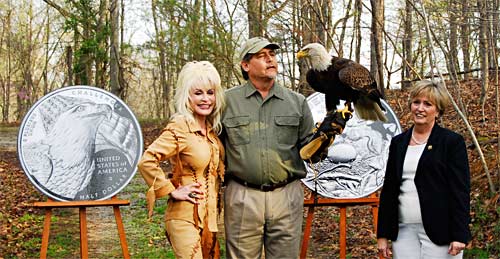 The eagle release event also included an update on the United States Mint commemorative eagle coin program that is currently raising money for the AEF’s eagle projects. Only 2-months into the year-long marketing effort, surcharges from sales of the gold, silver and clad coins have already raised over $5 million for the non-profit conservation group.

The clad metal half-dollar  in the 3-coin set features the image of the AEF’s non-releasable Bald Eagle “Challenger.”  That coin marks the first time in American history for an eagle (or animal) to have both its likeness and name featured on a U.S. legal tender coin.  The reverse side of the coin features two sibling eaglets in a nest snuggled against an unhatched egg.  This rare “first” offers both serious and novice collectors a  worthy and compelling reason to purchase one of the 750,000 limited edition coins before they sell out (with more than 300 million Americans that is very possible).

“This beautiful collectable makes a wonderful and lasting gift for our children and grandchildren”, said AEF President Al Cecere.  “A portion of the sales price from each coin will also help protect the bald eagle, a precious national treasure, for generations to come.”

The recently minted ‘Challenger Eagle’ commemorative coin went on sale on Jan. 15 and will be available for purchase from the US Mint (www.usmint.gov) only until Dec. 31, 2008, or until the coin sells out (whichever comes first).

This attractive half-dollar coin can be purchased for $10.95 (proof) and $8.95 (uncirculated).  Three dollars from each unit sold actually benefits the Bald Eagle.  The coin also is available in a Young Collectors Set educational package, which is offered at $14.95 (uncirculated) until June 2008.  Each coin comes with a limited edition certificate.

“To date, sales have been very good for all three coins,” notes Cecere. “We hope that interest in our cause from the media, companies and the American people will continue and increase until every coin is sold.”

For more information about the American Eagle Foundation, go to www.eagles.org or contact President Al Cecere. 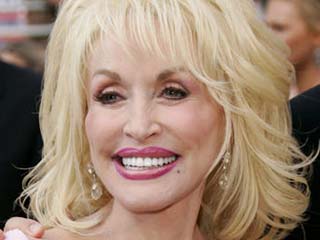 DANDRIDGE, Tenn. — Dolly Parton visited the woods overlooking Douglas Lake near the Great Smoky Mountains in designer buckskins and 4-inch heels. But she knew she wasn’t the star of this show. It was a young American Bald Eagle. The eagle was blown from its nest several weeks ago in Florida. On Thursday, it was returned to the wild by the American Eagle Foundation, which is based at the 62-year-old singer’s Dollywood theme park. Some 90 eagles have been released from the same spot since the 1990s. But this marked the first time that their country music benefactor had seen it in person. Before she helped open the cage and watched the bird soar away, Parton named it ‘Liberty.’