After weeks inside their eggs, these two siblings finally meet! The American Eagle Foundation and the cooperative partners of the D.C. Eagle Cam project are proud to announce that there are now two healthy eaglets residing in the nest that sits high in a Tulip Poplar tree in the U.S. National Arboretum, right inside the Nation’s Capitol. Watch LIVE 24/7 on dceaglecam.eagles.org. Photo © American Eagle Foundation / www.eagles.org (Screenshot captured online by Carol Caesar) 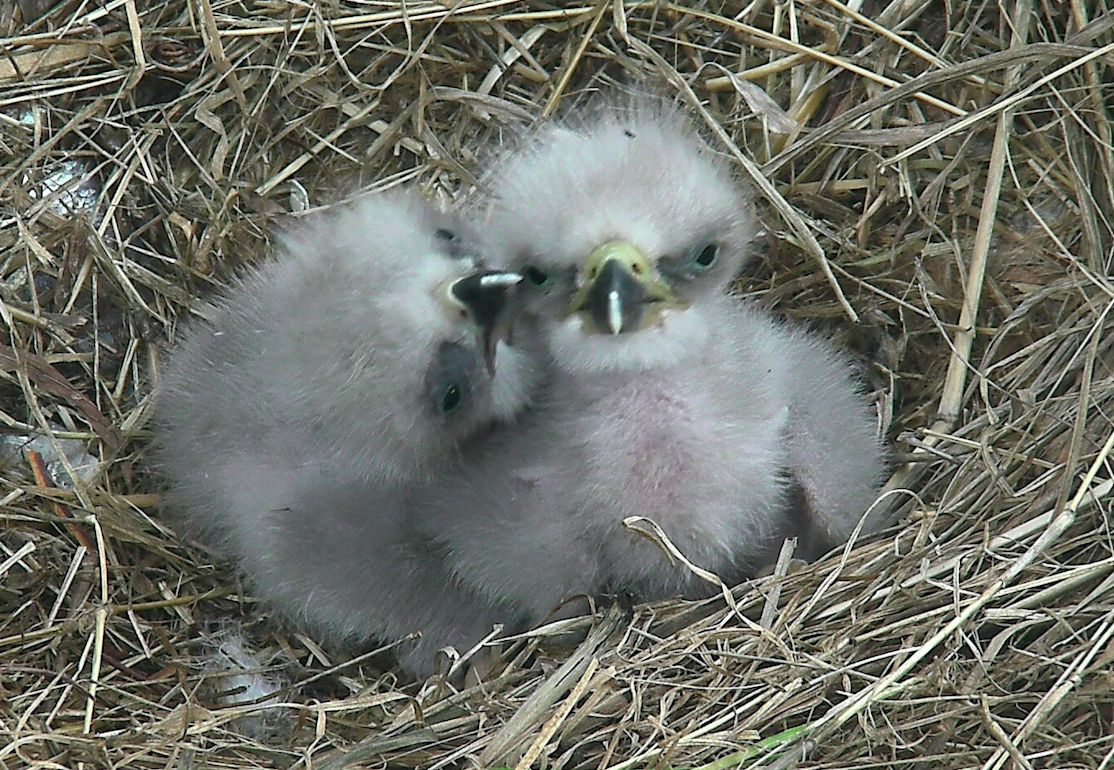 WASHINGTON — Millions of people were glued to their computers and mobile devices this week watching dceaglecam.eagles.org and waiting for the eggs of “Mr. President” & “The First Lady” to hatch LIVE on the Washington D.C. Eagle Nest Cam.

The American Eagle Foundation (AEF) and the cooperative partners of the project are proud to announce that there are now two healthy eaglets residing in the nest that sits high in a Tulip Poplar tree in the U.S. National Arboretum, right inside the Nation’s Capitol.

These adorable newborn eaglets, wobbly-headed and covered in fuzzy gray downy feathers, are stealing the hearts of Americans and international viewers alike.

This morning, after “DC3” joined its parents and older sibling “DC2” (which hatched on Friday), nest-cam fans worldwide are celebrating with great sighs of relief but are now probably wondering “what comes next?”

These newborn eaglets have unsteady legs and heads, won’t be able to fully generate their own body heat for the first several days, and will be extremely dependent on their parents for safety, food, and warmth.

This state of affairs will change fairly quickly though.

Over the next 12 weeks, these gray fuzzy eaglets will gradually grow into full-size juvenile eagles with all-brown plumage. They’ll still be dependent on mom and dad, but will begin to develop their eagle skills by feeding themselves (food provided by parents) and learning to use their wings through “wingersizing.” They’ll start to explore the edges of their nest and the surrounding branches, and between 12-14 weeks of age will take their first flights and make their ways into the world.

The public’s response to this live-streaming nest cam project has been phenomenal. Since the website launched on February 15th, the live cameras have been viewed over 7 million times, most of which have happened in the past several days during the hatching process. The D.C. Eagle Cam project and the hashtag #dceaglecam has been trending all over the internet.

In a few weeks, the general public will be given the opportunity to help come up with two suitable names for these nestlings.

“Judging from the monumental public interest the D.C. Eagle Cam is receiving, it seems that citizens across America have momentarily put their political differences and disagreements aside to share and enjoy together the special importance, wonder, and meaning of their symbolic National Bird,” says AEF Founder and President Al Cecere.

The D.C. Eagle Cam partners are hopeful that two healthy Bald Eagles will fledge the nest this summer, but it is important to reiterate to viewers that this is a wild nest and anything can happen. Things like sibling rivalry, predators, and natural disaster can affect this eagle family and may be difficult to watch.

ABOUT THE DC EAGLE CAM PROJECT:

After the eagle pair left their nest site in August 2015 for their annual migration, American Eagle Foundation staff traveled to D.C. to install state-of-the-art cameras, infrared lighting, and other related equipment in-and-around the nest tree with the help of volunteers and experienced tree climbers. The USDA’s U.S. National Arboretum ran a half-mile of fiber optic cable to the cameras’ ground control station, which connects the cameras to the internet. The entire system is powered by a large mobile solar array (containing several deep cycle batteries) that was designed and built by students and staff from Alfred State College, SUNY College of Technology and was partially funded by the Department of Energy and Environment. USNA has implemented a backup generator that will kick in if prolonged inclement weather causes the solar array to provide insufficient power to the system. The high-definition streaming of the cameras is being provided by the American Eagle Foundation on dceaglecam.eagles.org.

The American Eagle Foundation (AEF) is a non-profit 501(c)(3) organization whose mission is to care for, restore, and protect the Bald Eagle and other birds of prey. For 31 years, the AEF has been carrying out its mission through Education, Repopulation, Conservation, & Rehabilitation. This public charity is headquartered at the Dollywood family theme park in Pigeon Forge, TN. Its famous Bald Eagle “Challenger” has performed free-flight demonstrations at more than 370 events across the U.S. over the past 20 years, all in an effort to educate and inspire the public. Learn more at www.eagles.org.

The U.S. National Arboretum is part of the U.S. Department of Agriculture’s Agricultural Research Service (ARS), their premier scientific research agency. The Arboretum, which encompasses more than 446 acres of land in northeast Washington, D.C. and also has worksites in Beltsville, MD, and McMinnville, TN, is one of the world’s premier woody plant research facilities and public gardens. Established by Congress in 1927, the Arboretum serves the public’s need for scientific research, environmental education, and gardens that conserve and showcase plants. Learn more at www.usna.usda.gov.

ABOUT DEPARTMENT OF ENERGY AND ENVIRONMENT (DOEE):

The Department of Energy and Environment (DOEE) is the leading local authority on all environmental and energy-related matters impacting the District of Columbia. DOEE improves the quality of life for the residents and natural inhabitants of the nation’s capital by protecting and restoring the environment, conserving our natural resources, mitigating pollution, reducing energy consumption, increasing renewable energy generation and clean power usage, and educating the public on ways to secure a sustainable future. Learn more at doee.dc.gov.

Meet the Operator of the Bald Eagle Live Cam