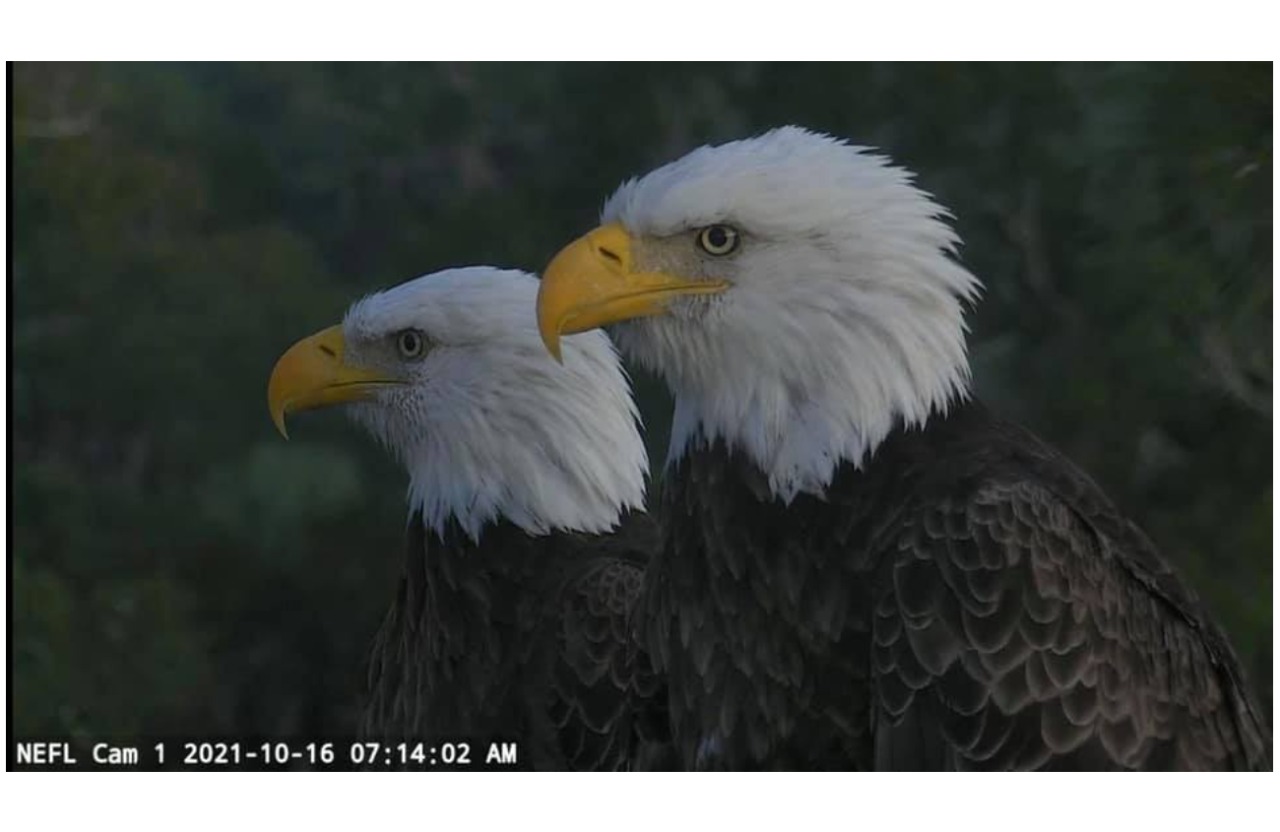 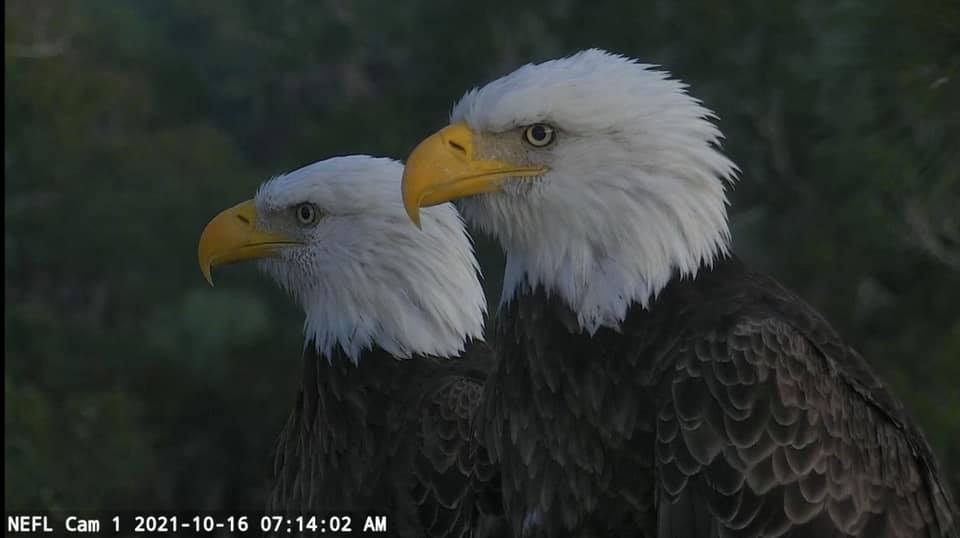 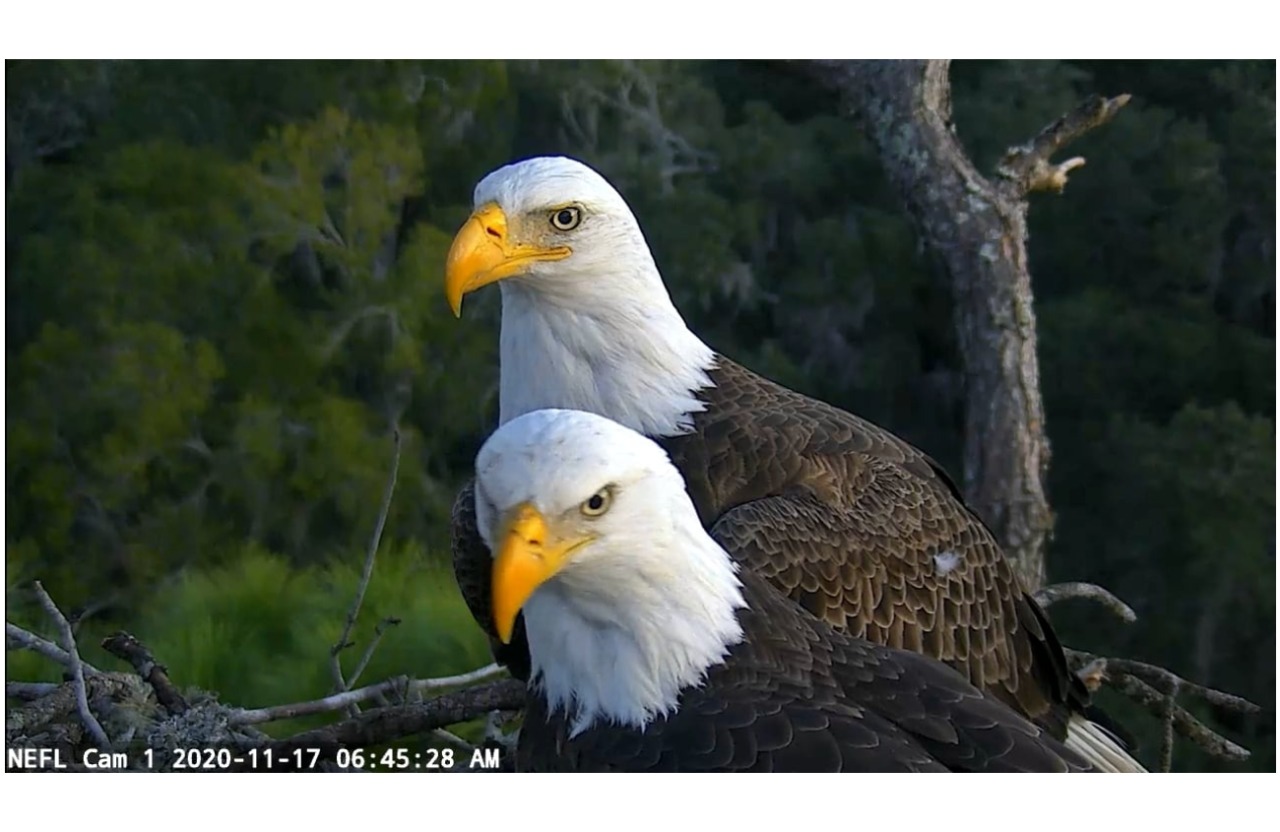 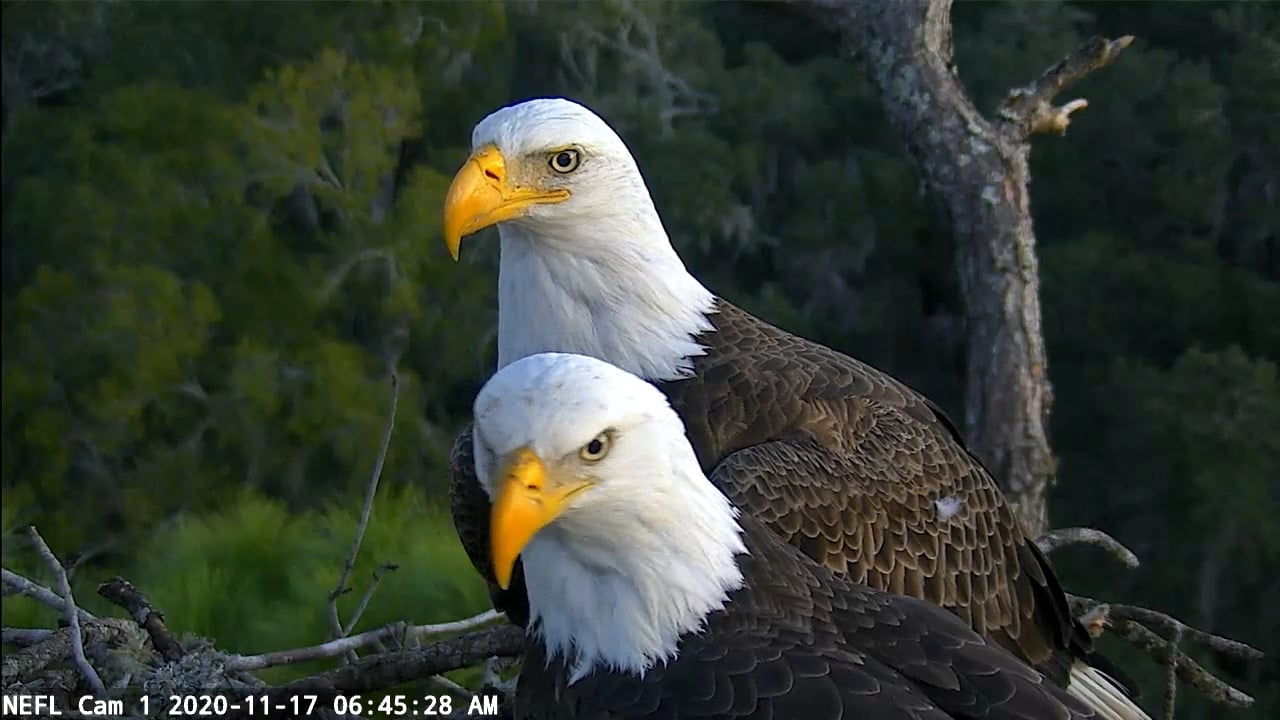 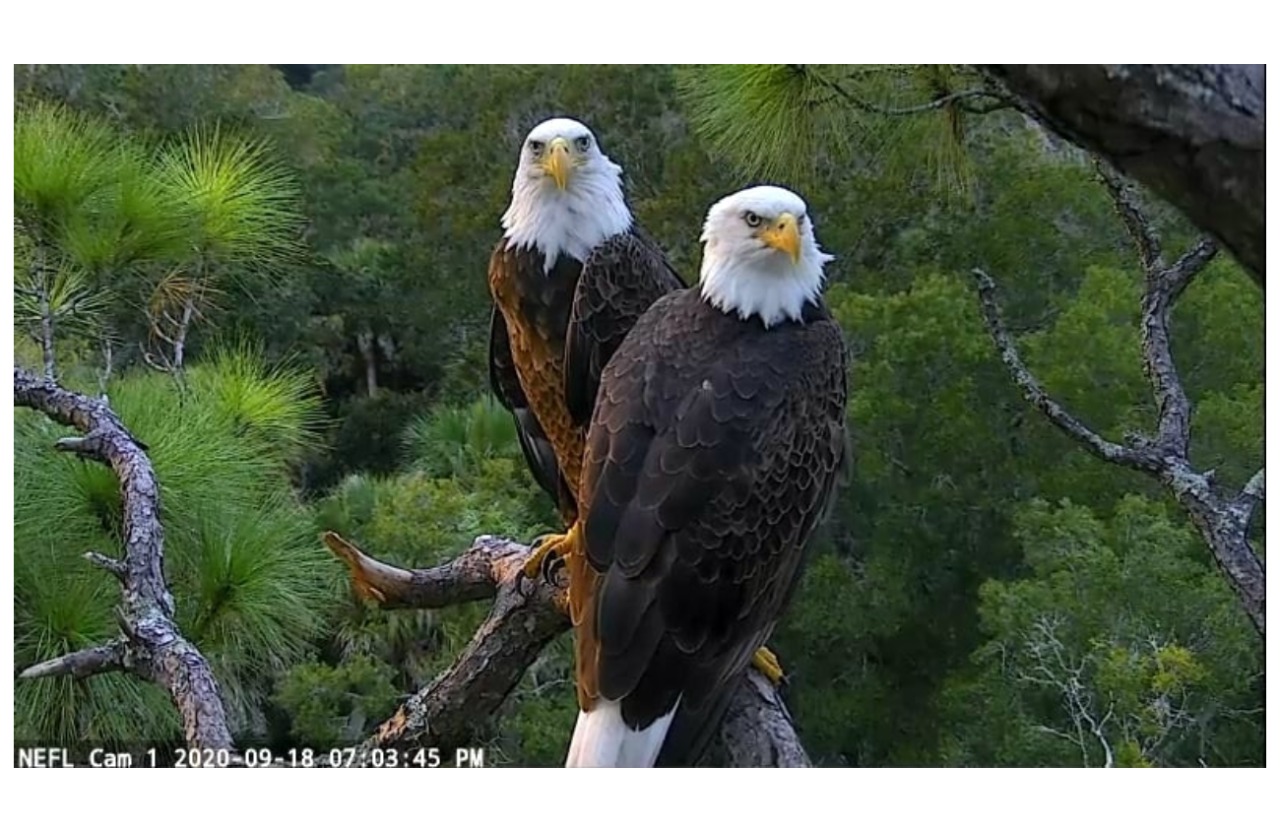 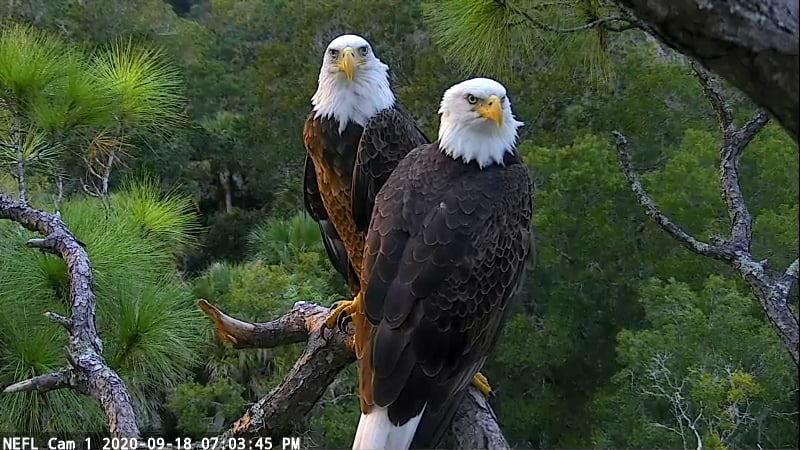 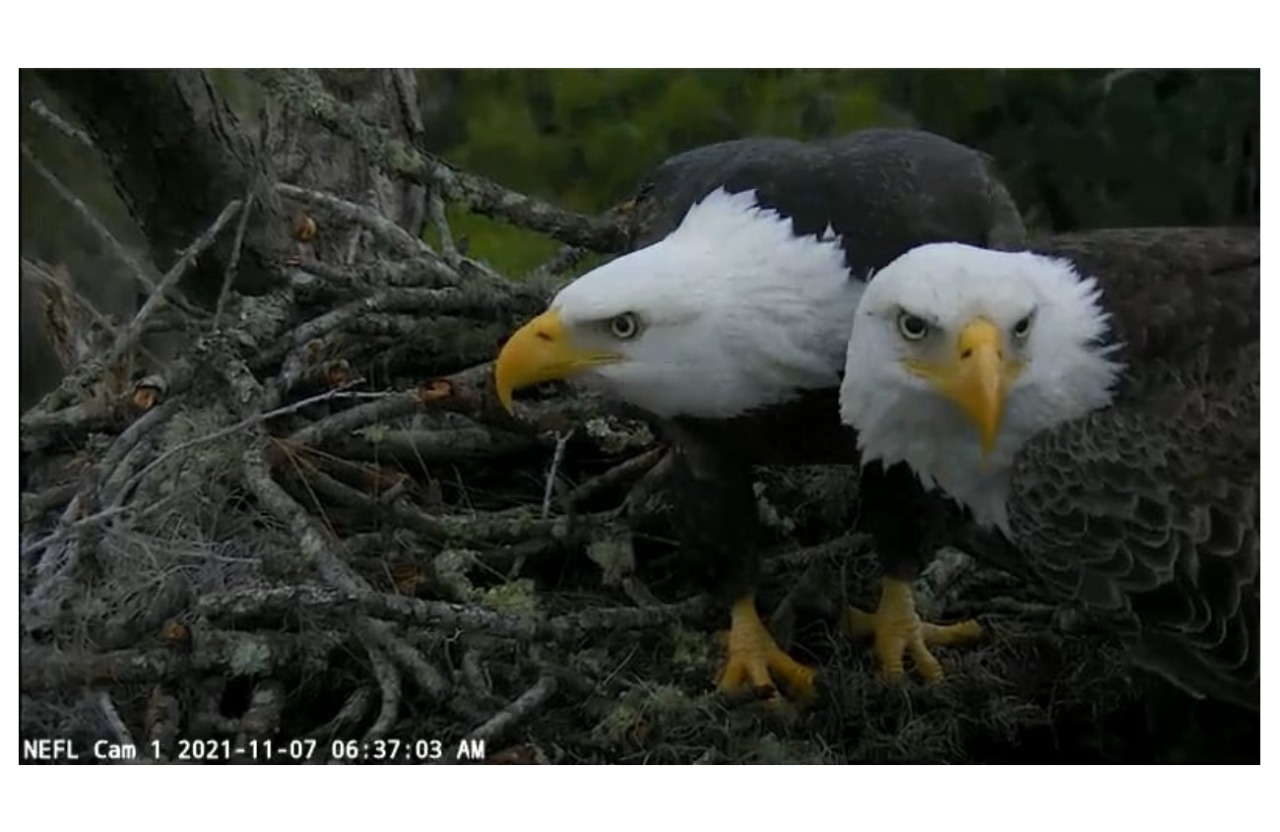 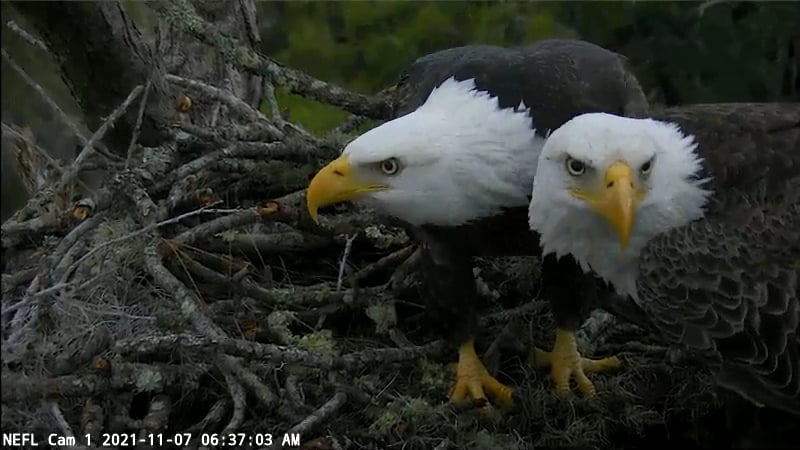 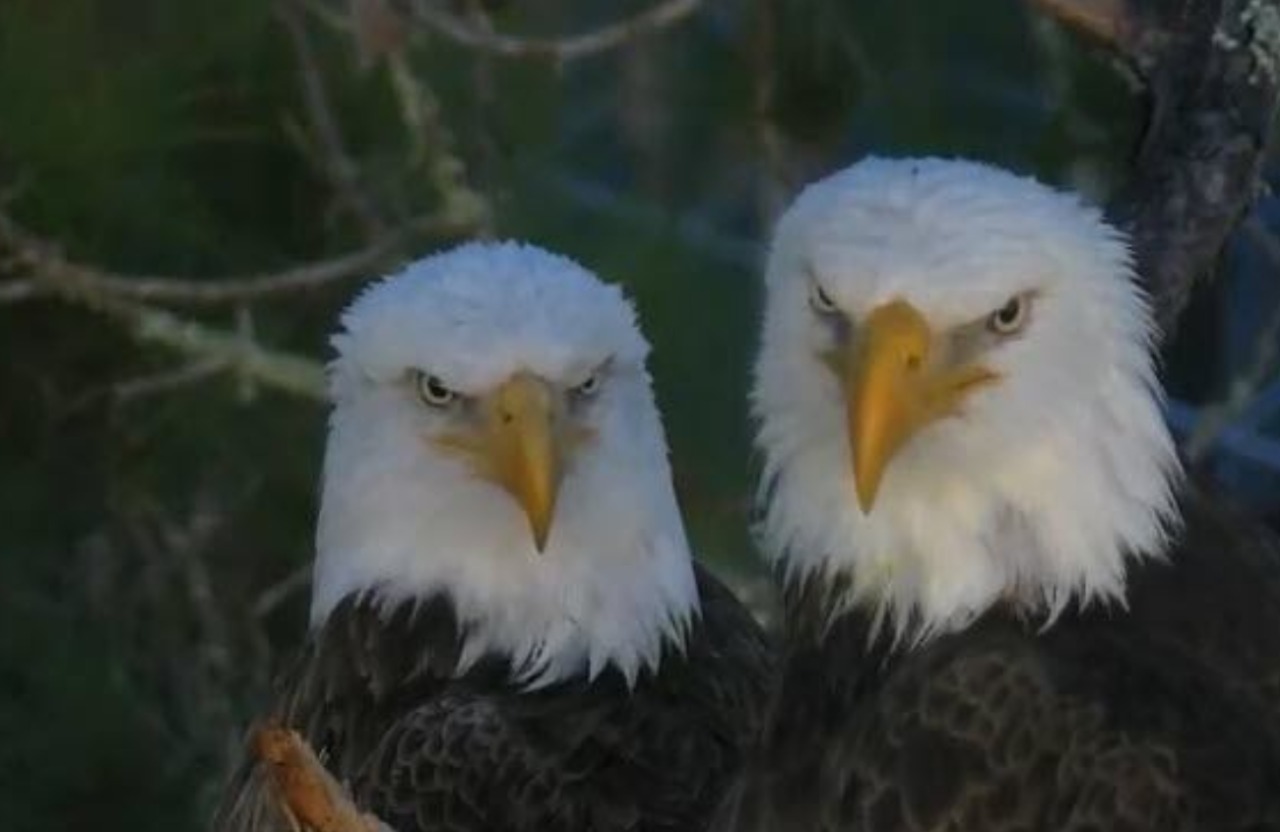 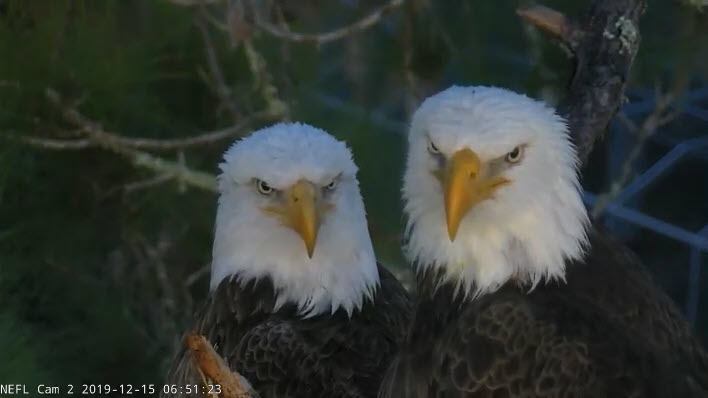 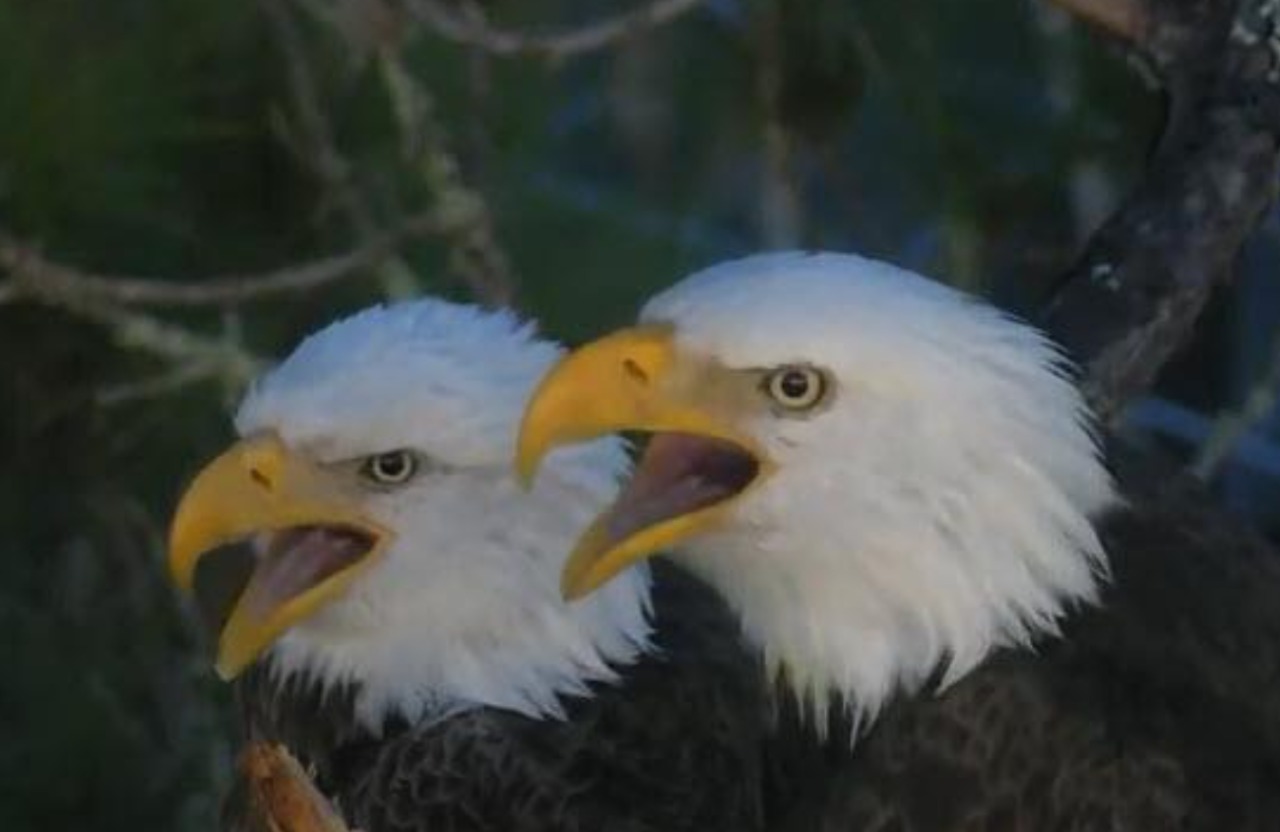 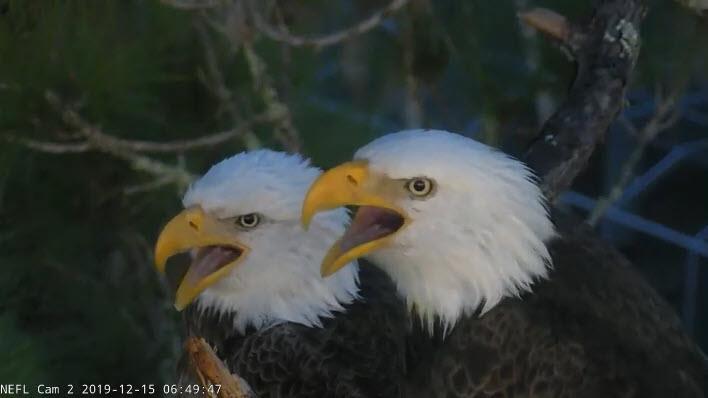 HAIL AND FAIRWELL – Changing of the Guard

As our viewers will remember, since 2008 Gretchen Butler has been carefully keeping records of this Bald Eagle nest, located in Northeastern Florida. The pattern of life in the Hamlet was predictable, with resident eagles, Romeo & Juliet, returning in early Fall to begin a new season, lay their eggs and raise eaglets to fledge. At the same time, they protected their nest from all intruders, keeping eggs and eaglets safe. They maintained an unprecedented 100% success rate over 10 seasons, raising 19 eaglets.

However, the 2018-2019 season was very different, as several large mature eagles disturbed the peace and tranquility of this nest. The expectations of the season ended in heartache as Juliet returned to the nest with an injury and was subsequently driven from the nest by a rival just days before the eggs were to hatch, leaving Romeo to do the work of two. When an egg hatched on Christmas Day 2018, a female eagle following Romeo to the nest swooped down and took the hatchling. The following day, Romeo left the area and neither Romeo nor Juliet has been seen since.

Eventually, a male eagle began appearing with regularity, and was subsequently identified as Samson, an offspring of Romeo & Juliet from the 2013 nesting season. Different female eagles appeared at various times, sometimes with Samson; sometimes alone. One very vocal yet peaceful eagle in particular appeared to have his attention more than others, and she was initially called A2. By photo comparison, it was determined A2 was not the eagle that took the hatchling.

Samson appeared back at the nest on August 26, 2019 and began bringing in sticks and moss, giving us further indication he was claiming the nest and preparing for the season ahead. His mate, Gabrielle, appeared on September 12. Since then, the pair was seen with each other, and sleeping in the nest tree or nearby. There was definitely a changing of the guard in the Hamlet. It’s been delightful watching Romeo and Juliet’s offspring, Samson, and his mate, Gabrielle, evolve into such a beautiful and compatible pair.

On Monday, January 13, 2020 at 6:34 p.m. EST, Gabrielle laid her first egg, NE22. A pip was first visible on Feb. 17 at 9:41 p.m. and the eaglet completely hatched out February 19 at 1:24 a.m. The second egg, NE23, was laid January 16, 2020 at 10:41 p.m. EST. A pip was observed February 20 at 7:33 a.m. and the eaglet completely hatched out at 4:30 p.m. the following day, February 21, 2020. Welcome eaglets NE22 & NE23! Through a naming contest, they were soon named Jules (NE22) and Romy (NE23) in honor of Romeo & Juliet. On April 20 Jules officially branched and perched higher on April 29. Romy officially branched on April 29. Jules fledged on May 7, and Romy fledged on May 17. Jules has not been spotted since her fledge day, but Romy continued to frequent the nest and surrounding area with Samson providing for him. Gabrielle left the area the day after Jules fledged but returned on June 15 then departing the area in the 25th. It is highly possible she and Jules were together during Gabrielle’s absence. Samson was last seen in the area on July 13. It is possible she and Jules are together and may yet return to the nest or be spotted this season. Both first-time parents did an amazing job in caring for their offspring.

Samson appeared back at the nest on August 15, 2020. He almost immediately began bringing in sticks and moss preparing for the season ahead. His mate, Gabrielle, appeared on September 4th. Since then, the pair has been seen in the area with each other, often sleeping in the nest tree or nearby. It’s been delightful watching Romeo and Juliet’s offspring, Samson, and his mate, Gabrielle, evolve into such a beautiful and compatible pair.

Through a naming contest, NE24 was named Legacy in honor of the legacy left by Romeo & Juliet.

On April 11 Legacy officially branched and then fledged on April 27. Legacy continued to frequent the nest and surrounding area with Samson and Gabrielle providing food. Gabrielle left the area on May 23, just one day after Legacy left the nest area. Samson was last seen in the area on June 11. This second-year pair did an amazing job in caring for their offspring.

See a timeline of the activities of Samson and Gabrielle.

Since 2008, Gretchen Butler, volunteer for the Audubon ‘EagleWatch’ Program and the American Eagle Foundation’s ‘Eagle Nest Cam’ Program, has closely monitored and documented important events associated with these eagles and their offspring. Her goal was to initiate the process for installing this Eagle cam, which would allow an up-close-and-personal glimpse of these majestic Bald Eagles to a worldwide audience, educating individuals of all ages about the USA’s precious National Symbol.

With the support of the American Eagle Foundation, that mission was accomplished. In August 2013, prior to the return of the eagles, two high-definition PTZ video Cam were installed, providing a view into the nest and a view up into the nest tree from below. The following year, a second, solar-powered PTZ HD cam was installed in the nest tree at a different angle, providing a total of three views. With the start of the 2019-2020 season, we now have four cams from which viewers can choose to watch! This allows everyone watching to experience all the excitement—Eggcitement—and nest activities without disturbing the day-to-day life of these nesting eagles.

The AEF also provides a moderated Chat Forum to enhance the experience and to welcome and educate viewers. Dedicated Chat Moderators and Remote Camera Operators have the AEF’s undying gratitude for their professionalism, attention to detail, and welcoming presence they bring to all viewers!

Enjoy an end-of-the-season slideshow created by chatter Lil O’Rourke Gillar, with highlights from the 2014-2015 season: