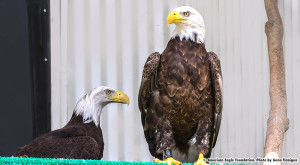 Honor and Braveheart are a bonded non-releasable pair of Bald Eagles that live in a large aviary at Eagle Mountain Sanctuary. They have hatched and raised numerous young as a part of the AEF’s Captive Breeding and Hacking programs.

View a timeline of AEF’s Captive Breeding and Hacking history!

This pair was already bonded when they were transferred to the American Eagle Foundation from the San Francisco Zoo in 2007. In a ceremony honoring fallen soldiers, these two Eagles, along with three other non-releasable Bald Eagle breeding pairs were named by the families of these brave soldiers.

In 2007, the American Eagle Foundation was chosen by the U.S. Fish & Wildlife Service to receive four Bald Eagle breeding pairs from the San Francisco Zoo to care, originally it was to be five pairs, however one mate passed away prior to the transfer. The living mate of the pair is now a educational eagle.

These pairs were part of the San Francisco Zoo’s captive-breeding program. These regal birds had previously hatched numerous young eaglets, which were placed in wild nests located on the Channel Islands—as part of a Bald Eagle recovery project located off the coast of Los Angeles. The zoo concluded its successful breeding program after re-introducing more than 100 young Bald Eagles into the wild.

The eagle pairs flew over America—from San Francisco to Knoxville—on the wings of a special FedEx cargo jet on June 18 and 19, 2007. After a physical check-up by University of Tennessee veterinarians, these Eagles were placed into their new aviary homes in the foothills of the Great Smoky Mountains.