Make a donation in memory of Owl-x 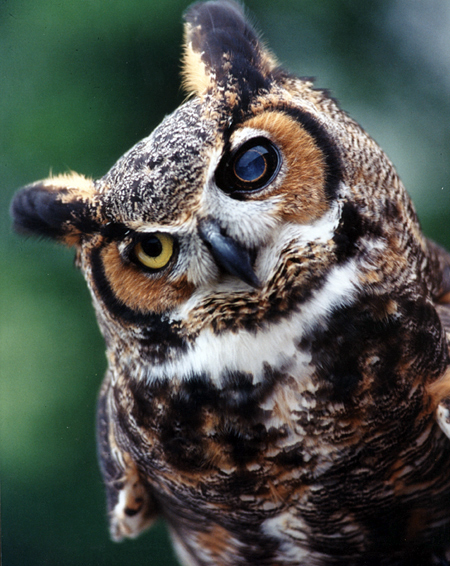 Owl-x, the Great Horned Owl, star of stage and film, died on March 6, 2001. He succumbed to a degenerative neurological condition that affected his vision and balance.

Owl-x, pronounced Alex, was found in January 1985 as an injured youngster on the Belle Meade golf course in Nashville, TN. He had fallen from his nest during a storm and impacted on his left side. This resulted in a broken left leg, left wing, and caused a trauma cataract to his left eye. Approximately 2 – 3 weeks of age at the time, Owl-x required frequent handling which included bandage changes on the wing and leg every other day to allow continued bone growth. Owl-x’s wing and leg did heal, but at the sake of his identity. During the handling, Owl-x became imprinted on humans instead of his parent owls and made it impossible to release him. However, this made Owl-x a great bird for educational use and when he was old enough, he began his educational career with the Cumberland Wildlife Foundation in Mt. Juliet, Tennessee.

I began my job as Director of Wildlife in February 1986, and this was when I first met Owl-x. I was impressed with his gentle nature and how at ease he was around the public. Owl-x became one of Cumberland’s best educational birds.

One thing I noticed early in our time together was that Owl-x like to jump to a T-perch that we used in our shows. It was not long before we were able to take him from his transport kennel and then let him fly to the perch. We were able to use this same behavior later when we joined the National Foundation to Protect America’s Eagles (now American Eagle Foundation) and moved to Dollywood in 1991. In the Wings of America show, Owl-x emerged from a hole in a tree and flew to the T-perch on stage. He is one of the few birds that more-or-less trained himself and one that we did not have to have on weight control in order to do his routine. 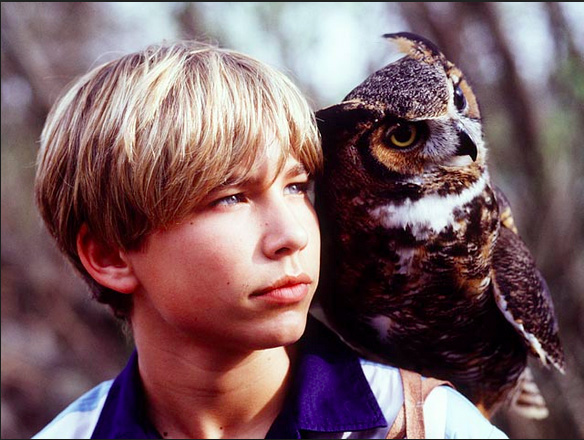 Owl-x was also a great foster parent. Even though he was a human imprint, something in his nature wouldn’t let him resist the begging calls of an orphaned Great Horned Owl. I remember one night after returning from a state park program, Owl-x went right to his duties as foster dad. I usually put him back in his enclosure first, and while I was putting the other birds away, I heard the begging calls of two owlets in Owl-x’s enclosure. I quietly crept up to one of the windows and watched as Owl-x patiently fed both the youngsters. I guess he raised over twenty owls in this way.

At Dollywood, Owl-x became a star. He was an audience favorite and it was quite interesting to play a straight man to an owl. One part of the owl section was imitating the calls of the Great Horned Owl. With Owl-x on the perch beside me, I did my best rendition of the hoot that Great Horned Owls make. On many occasions, Owl-x would turn to me, give me a funny look and then grab the mouthpiece of my headset mic, flipping it up as he correctly hooted for me! The audience totally loved this unrehearsed behavior! He also did this same thing to several other people who hosted the show. Owl-x probably appeared in over 5000 shows at the park.

In 1996, Hollywood called and needed an owl for an upcoming movie about the Stouffer brothers, who became famous (Marty most notably) for their wildlife films and documentaries. The director needed a gentle owl to work with actor Jonathan Taylor Thomas, who portrayed Stouffer. Stouffer had a pet owl named Leona and Owl-x was to take the part. Owl-x was a natural and got along superbly with Thomas. The movie, ‘Wild America’, was released in 1997 and became a hit. 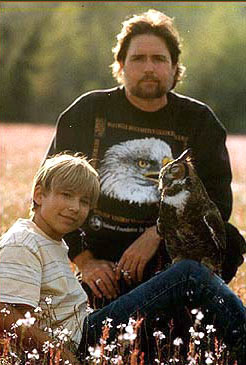 Owl-x’s scenes as Leona were touching and probably captured him at his best.

Not long after the movie’s release, Owl-x began to have problems that may have been rooted in his fall from the nest. In 1986, I took Owl-x to an opthamologist to examine the cataract in his eye. The doctor said that it was useless to remove the cataract because he was also blind in that eye. He also noticed the way that Owl-x kept his head at a slight angle and said that he may develop more serious symptoms in the future.

Unfortunately, he was right. Owl-x began to experience days when he could not hold his head in an upright position. We took Owl-x to the University of Tennessee Vet School where they ran a series of tests. He was given antibiotics to control what was thought to be an inner ear problem. He was also given vitamins and steroids over the next two years, but nothing really seemed to work. He had good days where he seemed pretty normal, only to be followed by days that he could not hold his head up. He still kept his spirit, and other than the fact his head looked like it was screwed on upside down, he acted normally and hooted to us like he always did.

After a while, the good days occurred less frequently and he had trouble keeping his head upright. We tried another run of antibiotics and also gave him more time in the sunlight. This seemed to help for a short time. On March 6, one of the employees noticed that Owl-x had fallen from his perch and seemed to be in some sort of spasm. It was almost like he had a heat stroke, but the day was not overly warm. We rushed him in front of an air conditioner to see if the cooler air would help his condition, but to no avail. Owl-x died in my arms.

It was tough to see him go, but it was also a bit of a relief to know that he wasn’t suffering anymore. I now know that he is in a far better place, surely amusing someone. Owl-x was very special and thousands of people got to know a very unique bird.

Thanks to him, my life has been forever changed and I know that I’ll never forget him.