Make a donation in memory of Jester 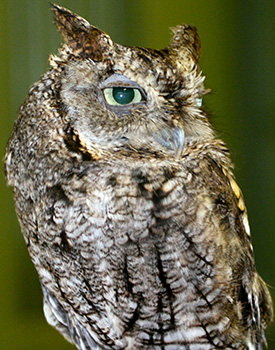 Jester came to the American Eagle Foundation in 2010. We are not sure how old he is since he was already full grown when he arrived.

He was deemed non-releasable due to an eye injury, which probably occurred after flying into some inanimate object. With his one green eye and one yellow eye he had quite the charm, making him a perfect educational bird.

He was seen in the ‘Wings of America’ birds of prey show at Dollywood in Pigeon Forge, TN.

This type of bird has been misnamed, because they don’t really screech at all. Instead they have more of a wavering whistle. They come in a variety of color phases, from a reddish-brown to a grayish color. In the wild, screech owls can live to be 10 years old and up to twice that in captivity!

The ear tufts on top of their heads have nothing to do with hearing, rather, they are used for camouflage and mating purposes.