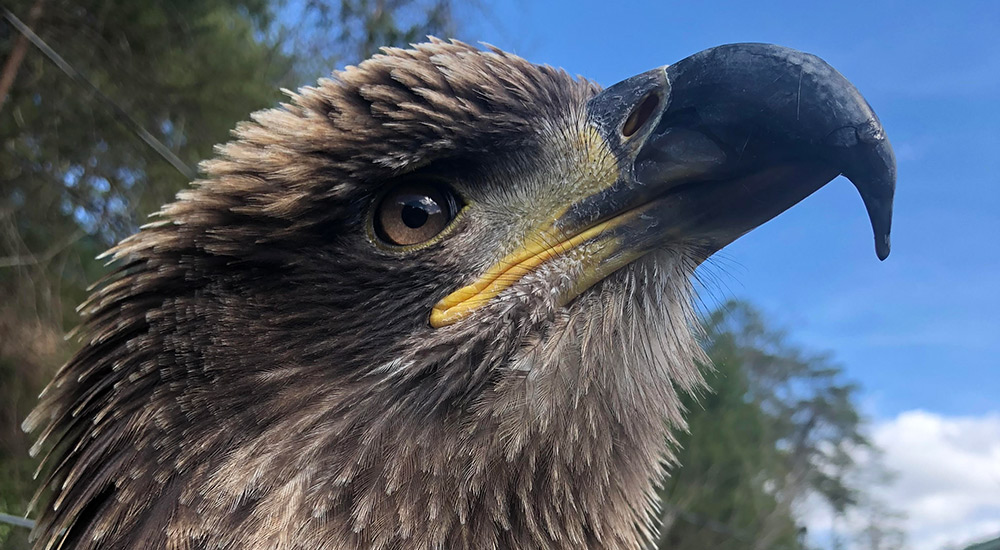 Saphira was hatched at the AEF on May 9, 2017. She was released from our hack tower on August 17 and travelled to Virginia where she was found in September of the same year, emaciated and malnourished. She was transferred to a rehabilitation center in VA and then back to the American Eagle Foundation where she was placed in an aviary with live rabbits and fish. Saphira showed no interest in hunting for herself and was ultimately deemed non-releasable. She now resides permanently at the AEF as an educational ambassador.

Saphira is one of our largest glove-trained eagles, weighing about 10lbs with an approximately 7ft wingspan. Her size and bold personality inspired her name, which she shares with the fictional dragon from the book/movie series, Eragon. She is a very curious bird and loves to interact with new enrichment items! She is an excellent educational ambassador and you may see her accompanying AEF staff at off-site educational events!

Bald Eagles obviously aren’t bald! “Bald” in this sense refers to an old English word that means “white headed.” When eagles fledge the nest at between 10 and 13 weeks of age, they are primarily all brown. An Eagle gets its full white head and tail feathers and yellow beak and eyes at around four to five years of age.