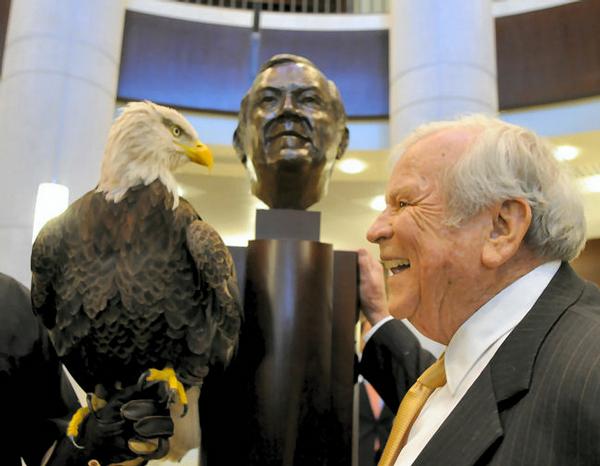 Howard H. Baker Jr. poses with ‘Challenger’ and the bust of himself in the rotunda of the new UT Howard H. Baker Jr. Center for Public Policy following the grand opening which was held Friday morning during a private dedication ceremony at the center.

During his career, Howard Baker, Jr. went from being a student at UT to serving three terms as a U.S. senator. Friday morning, he returned to his alma mater for the opening of a new center named after him.

Virtually anybody who’s anybody in Tennessee politics looked on as he cut the ribbon to open UT’s new Center for Public Policy.

They all agreed that with it, Senator Baker’s legacy of bi-partisanship will mold leaders for years to come.

Senator Baker was born 83 years ago in Huntsville, TN. A small town boy, he’s now looked to as one of America’s greatest senators.

“A person who I regard, and I think almost everybody else here thinks, is Tennessee’s greatest living individual,” said Baker Center Board of Directors Chair James Haslam II.

Senator Baker believes there’s still much to learn behind the center’s new walls. His hope and challenge for the university is that students do just that.

And though the center is not the only building on UT’s campus bearing Baker’s name, he’s still quite humble.

He says that when he was a student at UT, he never imagined he would someday have so many buildings named after him.

“To be honest, I’m still not sure it’s a great idea,” he laughed.