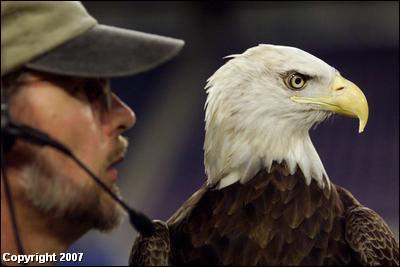 The Bald Eagle Challenger left Tennessee today with Al Cecere of the American Eagle Foundation at Dollywood for an announcement in D.C

The Bald Eagle Challenger has been asked to play a starring role at the expected announcement Thursday of the removal of his sort from the Endangered Species List.

Challenger, the best known inhabitant of the American Eagle Foundation’s center in Pigeon Forge, was headed yesterday – by van – to Washington, D.C.

If all goes as planned, he’ll be at the Jefferson Memorial with the U.S. Secretary of the Interior and other dignitaries for what should be an historic moment.

Challenger will do the flying while others do the talking, “if conditions are right” for a short flight during the ceremony, said Al Cecere, head of the foundation.
“If not, we’ll just hold him on a glove tomorrow,” he said.

Cecere wasn’t saying what the announcement was, specifically, but the U.S. Department of Interior has been under a court-imposed deadline to delist the Bald Eagle by June 29.

Federal officials have said they intended to make the deadline. The number of nesting eagle pairs in the lower 48 states has grown from a few hundred in the 1960s to thousands today.

Dozens are in Tennessee, with hundreds more flying in to winter each year. The eagle was among the original animals placed on the Endangered Species List for special protection about 40 years ago. It eventually dropped to “threatened” status on the list.

The delisting has been anticipated for several months, with a temporary hold up as part of the Bald and Golden Eagle Protection Act of 1940 was re-worked to make it stronger.

Challenger, 19, can’t be released to the wild but has been a lot of places. He has appeared at Titans football and other pro-ball games and at the White House and the Capitol, among other patriotic locales.
[/av_textblock]