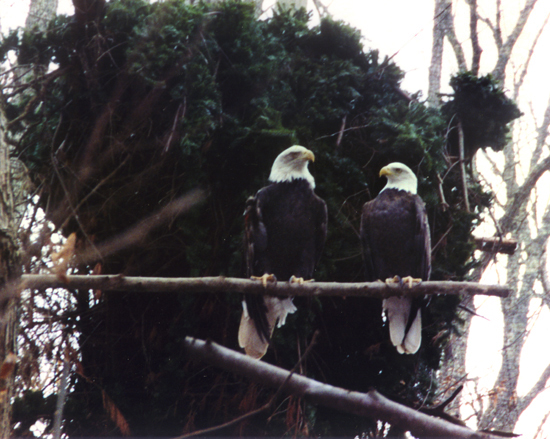 Liberty and Justice at home on Eagle Mountain Sanctuary.

They’ve been together through both the good and bad times since 1993. Now, the most intimate details of their family life are being revealed publicly via live action cameras on the World Wide Web.

The happy couple is a pair of non-releasable Bald Eagles named LIBERTY and JUSTICE, cared for by the non-profit American Eagle Foundation home-based at Dolly Parton’s Dollywood theme park in Pigeon Forge, Tennessee.

On April 25, 2002, the world watched them become proud parents when a beautiful baby arrived in their love nest. The eaglet is scheduled for release into the foothills of the Great Smoky Mountains this July when fully grown at twelve-weeks of age.

“The little one recently survived a hail and thunder storm thanks to the awesome body shield provided by the parents,” said Al Cecere, president of the American Eagle Foundation.  “It was a real on-line TV drama that day, and we prayed for a happy ending.”

Supporting members of the organization are being offered a chance to participate in a “Name An American Eaglet” Contest.

On July 4, 2002, one lucky member will be awarded the regal right to name the young bird, plus the rare privilege of being on hand to witness its release into nature. The winner of this special honor will be selected through a random drawing. Anyone becoming a member by July 1 will be eligible to enter.

More than 80,000 schools from across the United States have been invited by the Foundation to tune into this fascinating “nest-watch” adventure and enjoy the special learning benefits it provides. Through the miracle of Internet and video technology, people around the globe will be able to keep a close eye on this majestic American Eagle pair and their youngster until June 6th.

“Everyone is welcome to drop by and visit this great website. It’s a wonderful opportunity to witness God’s magnificent creation,” says Cecere. “You’ll see these faithful mates tending to daily nesting duties and displaying their affection. You may even get a chance to see them tenderly caring for and feeding their newest pride and joy.”

On June 7, 2002, the Foundation plans to remove the eaglet from its parents nest and place it in an artificial nesting tower over-looking a secluded lake cove in East Tennessee. In mid-July, after spending about six weeks in the tower, the bird will be released into the wild and tracked with a radio transmitter to help monitor its progress.

Two video cameras keep a close electronic eye on the eagles from different vantage points, and can be viewed during daylight hours, Eastern Standard Time (USA). One camera is placed directly over the nest and another provides a side view into the nest. Video-streamed live action images are provided in real time through Microsoft Media Player. Archived footage can be played using RealPlayer.

Liberty and Justice are housed at the American Eagle Foundation’s education, breeding and rehabilitation center based in Pigeon Forge, Tennessee at Dollywood. The birds live in captivity and can no longer survive on their own because of permanent physical disabilities caused by gunshot injuries to the eye, foot and wing. However, the young that they hatch and rear are released into the wild to assist eagle repopulation efforts in the Southeastern United States. The pair has raised ten eaglets since 1996 that have been released.

The Foundation is widely recognized as a national leader in Bald Eagle conservation, recovery and public education. Established in 1985, it is dedicated to the care and protection of the Bald Eagle and its habitat. The Foundation has educated millions of people, hatched and released dozens of eaglets into the wild, and rehabilitated numerous injured eagles and other birds of prey.

Sponsors and service/equipment suppliers for the eagle nest cam project include Dollywood, Tappedinto.Com, VideoComplex.Com and Metatron Computer Studios. Learn more about these supporting companies by visiting the Sponsors section located on the eagle cam website.

“For the benefit of future generations, we must all do our part to keep America’s eagles flying strong and free into the twenty-first century and beyond,” says Cecere. “You won’t want to miss this unique and exciting internet nature experience. You’re certain to see true love in action.” 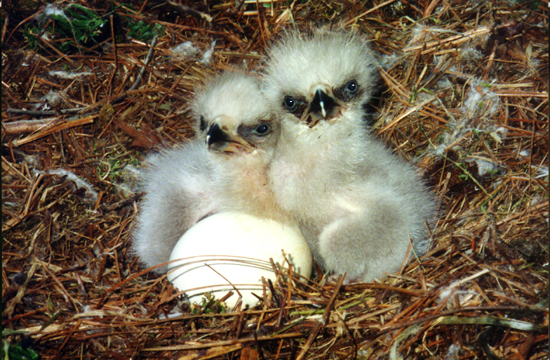 Once Again, a Land of Eagles
Scroll to top