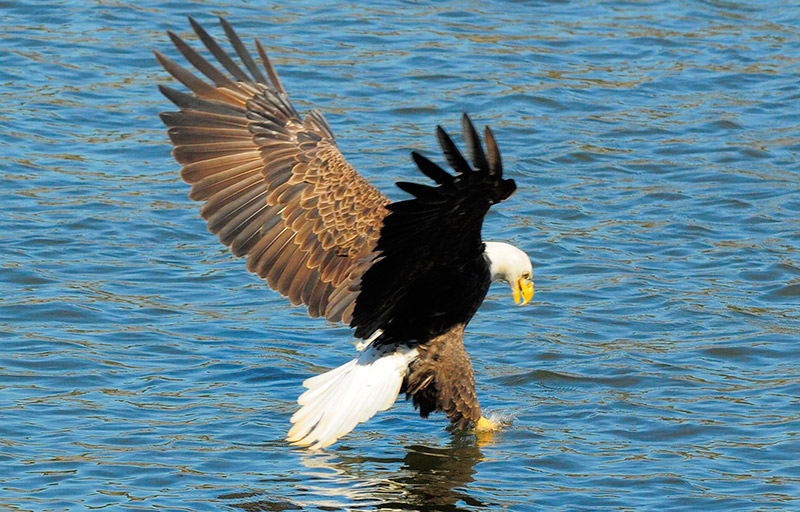 A court decision has been reached to remove the Bald Eagle from the list of endangered species. Photo by Woodrow Dawson.

St. Paul, Minn. – (AP) – The U.S. Fish and Wildlife Service said Friday it is working to remove the Bald Eagle from the list of endangered species, following a court decision ordering it do so by Feb. 16 unless it can prove further delays are necessary.

U.S. District Judge John R. Tunheim’s order came in a lawsuit brought by Pacific Legal Foundation on behalf of a Minnesota landowner who wants to develop property in Morrison County where there is an active bald eagle nest.

“We are evaluating the court decision and preparing our response to it,” said Valerie Fellows, a Fish and Wildlife spokeswoman in Washington. “However, we are working diligently to delist the bald eagle, because it has met the goals for recovery.”

The Minnesota Department of Natural Resources issued a letter recommending no development within 330 feet of the Morrison County nest to ensure compliance with the Endangered Species Act and the Eagle Protection Act, according to the court filing.

In 1967, under a law that preceded the Endangered Species Act, the Bald Eagle was declared an endangered species in the lower 48 states. Since then, the population has rebounded and the Fish and Wildlife Service proposed in 1999 that the Bald Eagle be delisted, but never issued a final ruling.

The major protections afforded to endangered and threatened animals under the Endangered Species Act are prohibitions against “taking,” meaning to kill, wound, shoot, capture, harass, harm or disturb; providing critical habitat to the animals; and requiring all federal agencies to comply with the law.

After making the 1999 delisting proposal, the Fish and Wildlife Service was required under the Endangered Species Act to either make the proposed rule final within a year or withdraw it, PLF attorney Damien Schiff said.

“Today, there are more Bald Eagles than in 1999, but it still has not been removed from the list,” Schiff said. “All the science shows that the Bald Eagle is fully recovered and not threatened or endangered.”

“We simply asked the government to do what it said it would do, and we are happy that a federal court has issued an order to that effect,” he added.

If and when the Bald Eagle is removed from the endangered list, two other laws will continue to protect it: the 1918 Migratory Bird Treaty Act and the Bald and Golden Eagle Protection Act. But those don’t address habitat.

Fellows, the Fish and Wildlife spokeswoman, said the agency is trying to come up with a clearer definition of what it means to disturb a Bald Eagle under the Bald and Golden Eagle Protection Act before the bird is delisted.

Another reason for the delay, she said, is that the agency needs to provide management guidelines to monitor the birds once they are delisted.

(Copyright 2006 by The Associated Press. All Rights Reserved.)
[/av_textblock]