For the past 2 years, the American Eagle Foundation has provided HD Live Video from a nest of wild Bald Eagles in Northeast Florida. The parent eagles, ‘Romeo’ and ‘Juliet’ built this sturdy nest and have been returning every fall to refurbish the nest, lay eggs, and raise their eaglets.

This year was no different. Our cams went “live” on October 1, 2014 and tens of thousands of viewers watched all the activities in the nest.

On December 23 and December 25, the eaglets hatched. After a few weeks, a contest was held for the membership of the American Eagle Foundation to “Name the Nestlings.” 360 members submitted creative names and 5 were selected by a committee for the entire membership to vote on.

Three members submitted the same names for the siblings: St. Nicholas (or just Nick) and Noel (or Noelle). Congratulations to Theresa Wirth, Sandra Fink, and Eileen Leach for Naming our Nestlings!

The fluff-balls shown above are now formidable eaglets, over 7 weeks old, and learning new skills and becoming stronger every day. Romeo and Juliet have given these nestlings a great start. In a few short weeks, they will branch, fledge, and eventually enter the world of Eagles, to explore, find a mate, and hopefully raise families of their own. 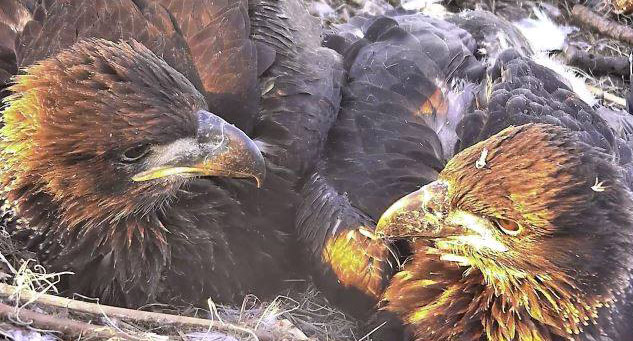