People from all over the world have their eyes trained on East Tennessee.

That’s because anyone from anywhere who has an Internet connection can watch three Pigeon Forge eaglets growing up in their nest.

“We used the cameras mainly for our own purpose in monitoring the birds to make sure the babies are OK, but we thought we’d allow the public to see what we were doing as well, so we thought we’d hook it up to the Internet,” said Al Cecere, founder and president of the American Eagle Foundation, an organization dedicated to rehabilitation and breeding of eagles.

About a decade ago, the American Eagle Foundation opened up the Web cam to the public, and it’s been a hit ever since.

“Some of these people are just absolutely in love with these birds, and they have to have it for breakfast, lunch and dinner or their day isn’t complete, you know, and they worry about them when they see something happening like a rainstorm or whatever, they wonder whether they’re doing OK or whether they’re eating enough, all those kinds of things that any parent would be concerned about, so it’s really interesting how the public gets involved,” Cecere said.

People can view the three eaglets day and night and make comments on the Web site.

Viewers often can catch a glimpse of the eaglets’ interaction with their parents, Independence and Franklin.

The two  Bald Eagles have been parents before, and Cecere says they’re doing better than ever, especially when East Tennessee had to deal with the recent spring storms.

“The parents are very diligent about it, they’ll spread their wings out over their eggs or their babies, they’ll take hail on their back or any heavy rain, and they will not surrender those eggs or those babies being uncovered and exposed to the elements,” Cecere said.

Over the years, the foundation has released hundreds of eagles, and the three featured in the nest cam will soon join them. Next week, they’ll likely move to a new nest in Douglas Lake.

“Usually when they reach about six and a half or seven weeks, they’re tall enough where they can stretch and look over the nest and see downward, and we don’t want them to see that,” Cecere said.

The caretakers are very careful about keeping the interaction with people to a minimum. In fact, back at the foundation’s headquarters, two other eaglets are being hand-fed by caretakers with a puppet in the shape of a bald eagle head.

After the current three eaglets are moved, the two hand-fed eaglets will move into the nest so that Independence and Franklin can care for them. 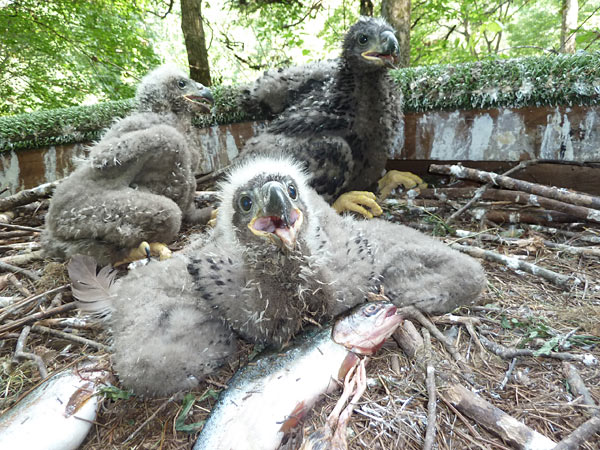 3 Eaglets hatched in the nest of Independence and Franklin
April 29, May 5, and May 6