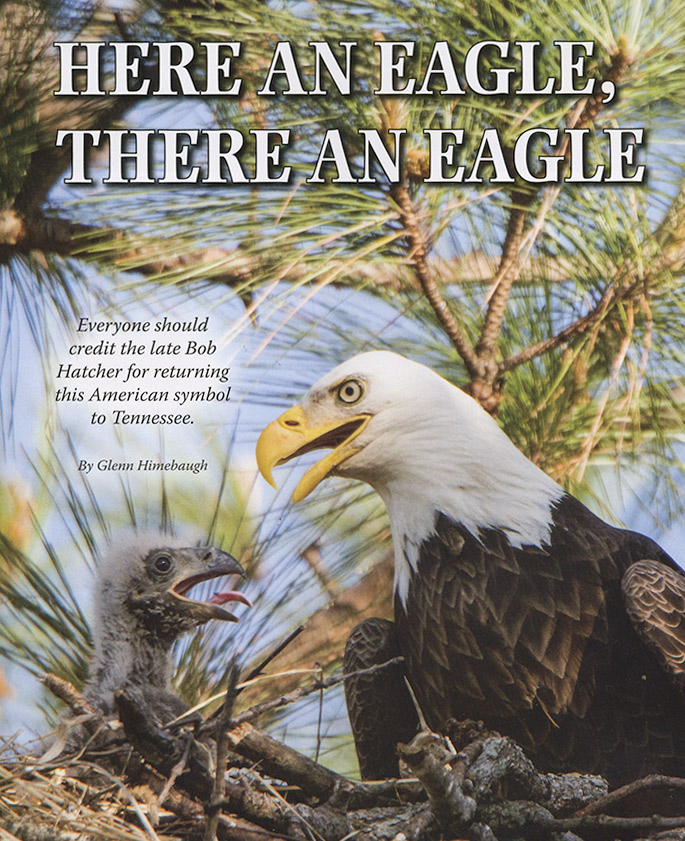 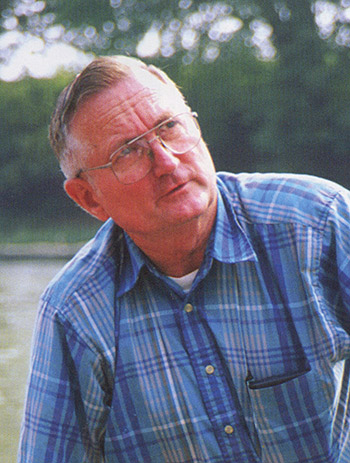 If you were driving across the Volunteer State in 1980 your chances of seeing a Bald Eagle in the wild were next to none. Travel along our rivers and reservoirs today and you’ll have a decent chance of seeing one perched regally in a tall tree or soaring effortlessly overhead. When that happens, take a minute to give thanks for the years of work the late Bob Hatcher did in coordinating efforts by state and federal agencies and private entrepreneurs to return the national symbolic bird to Tennessee.

Before we tell you about that work, let’s explain why eagles were in such short supply. The insecticide, DDT, had caused the birds to decline from the mid-50s to the mid-70s. Eggs became infertile, or their thin shells would break under the weight of the adult birds, according to Bald Facts About Bald Eagles in Tennessee, a fact sheet issued by The Tennessee Wildlife Resources Agency. The insecticide also reduced the number of northern eagles that came to Tennessee to spend the winter. DDT was finally banned in 1972.

Bob, who spent 38 years with the TWRA, began working on behalf of eagle restoration in 1983, while serving as non-game and endangered species coordinator. He continued on that project even after retiring from the agency, having overseen the release of several hundred Bald Eagles in 22 years.

He served as a consultant with the American Eagle Foundation, headquartered at Dollywood in East Tennessee. Its CEO, Al Cecere, became one of Bob’s closest friends and teamed up with him on numerous eagle-related projects until Bob succumbed to cancer on July 22, 2014.

“I met Bob in July, 1983, when I was living in Nashville,” Cecere remembers. “I saw an Associated Press photo of two dozen eagles that had been shot by poachers in the Dakotas. I called the TWRA and he and I talked for 45 minutes.

“Bob took me to Reelfoot Lake (to see eagles). Later (in the 1990s), I got country music stars to name eagles as they were released,” he said, describing his growing interest in helping the birds. Dolly Parton, Johnny Cash, and Eddie Arnold were some who did this, as were Gov. Ned McWherter and former Vice President Al Gore.

“Bob became my right-hand adviser. He was very much a part of the American Eagle Foundation. He was one of a kind and I miss him greatly,” Cecere assures me.

Just one week before Bob died, friends, family members and news media gathered at Bells Bend Park, in the community of Scottsboro, near Nashville, to release a young eagle named Hatcher’s Legacy in his honor. Unfortunately, Bob’s advanced cancer prohibited him from attending the event.

After entertainer James Rogers sang Fly Eagle Fly, Cecere released the bird, which flew away into the nearby green hills.

“We haven’t seen that eagle since, but that’s okay,” Cecere claims. “Bob was honored, but his humility was obvious. He said his philosophy was that there was plenty of credit to spread around.”

Hatcher’s Legacy is one of two eagles that have been named in Bob’s honor. Cecere explains how the other came about. “We had released an eagle on Douglas Lake and she had returned with a partner. We named the male Sir Hatcher to honor Bob after he had died.”

The TWRA also has assured Hatcher’s name lives on by establishing an annual scholarship in his name to help a college student majoring in ornithology or a similar field. 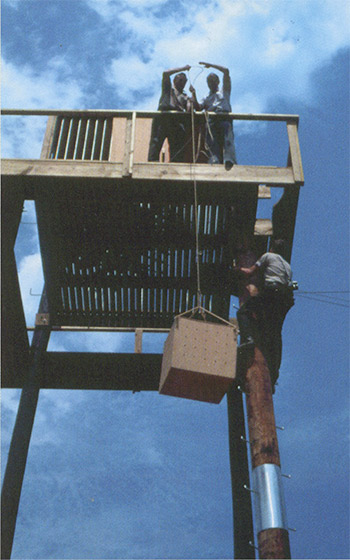 Hack towers were important in restoring the Bald Eagle in Tennessee and across the nation.

To increase the number of Bald Eagles in Tennessee, the TWRA and the American Eagle Foundation imported some birds from other states, most notably Alaska and Wisconsin, and they constructed and monitored hacking towers across the state where eagles were hatched and raised.

“In 1980 there was only one Bald Eagle nest in Tennessee and not many more in 1983,” Cecere declares. “But now, nearly 400 eaglets have been hatched, first at Land Between the Lakes, then at Reelfoot, then across the state.”

With the notable increase of eagles in the Volunteer State, hacking towers have pretty much become a thing of the past. Cecere says the only one still in use is located on Douglas Lake.

It wasn’t only Hatcher’s dedication to Bald Eagles and other endangered wildlife species that endeared him to those with whom he worked. Several who were interviewed used terms like detail-oriented, meticulous, gregarious, and professionally-driven to describe him.

“He established partnerships with other Tennessee agencies, natural resource agencies in other states, federal departments and agencies, non-governmental agencies and the private sector (that are still being utilized today),” declares Richard Kirk, who worked with Bob for about 10 years and is now the TWRA’s Region II Wildlife Program Manager.

Kirk remembers Hatcher telling him on multiple occasions, “It’s amazing what can be accomplished when it doesn’t matter who gets the credit.”

Another aspect of Hatcher’s work philosophy was the importance of keeping the public informed, Kirk says.

“Bob believed wildlife education led to wildlife appreciation,” he explains. “The number of public presentations Bob gave over his career, informing and educating people about the wildlife of Tennessee, is impossible to calculate. One of his favorite opportunities was Wilderness Wildlife Week, an annual event in Pigeon Forge, Tenn. Bob was a regular presenter over the years, even after retirement.”

TWRA Director Ed Carter tells me that while Hatcher’s genteel personality endeared him to people, “I have seen him bristle when the occasion arose over budget battles, necessary, or conversely, unnecessary regulations, or procedures which affected the work he thought so important.”

As dedicated to his job as he was, Hatcher displayed a sense of humor when the occasion presented itself, both Cecere and Carter recall. The latter offered an example of that humor:

“For those who viewed him as the quiet and shy type, there was a breakthrough moment at a TWRA Christmas party, Carter remembers. “It was pre-karaoke in those days, but we had recorded some songs and folks who dared were asked to lip-sync along with whatever song they felt brave enough to do so. So, Bob appeared “on stage” as Bing Crosby, complete with cardigan sweater, pipe and a Bear Bryant-looking hat and sang his complete version of White Christmas. It was a breakout moment that brought down the house and introduced another Bob Hatcher to those who didn’t know him as well as others.”

Because Hatcher’s work to restore Bald Eagles in Tennessee was so successful, his efforts on behalf of other endangered species are often overlooked. However, that certainly does not diminish the importance of what he did to enhance the numbers and status of osprey, snail darters, river otters, and endangered mussels, among others.

Still, our focus in this article has been where it logically and rightfully belongs—on Bob Hatcher’s success in restoring our national symbol, the Bald Eagle, in Tennessee. As we said at the outset, remember this dedicated naturalist every time you have the privilege of seeing an eagle during your travels across our state! 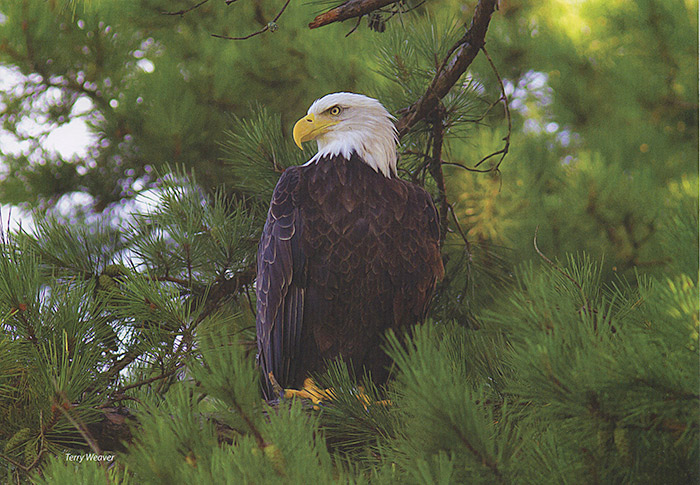 Travel along our rivers and reservoirs today and you’ll have a decent chance of seeing an eagle perched regally in a tall tree or soaring effortlessly overhead.

Dr. Glenn Himebaugh is a professor emeritus of journalism at Middle Tennessee State University. A resident of Murfreesboro, he is a former president of the Tennessee Outdoor Writers Association. This article originally appeared in Tennessee Wildlife, Winter 2015-16.