Call to Action — A Bald Eagle Nest in Colorado Needs Our Help! 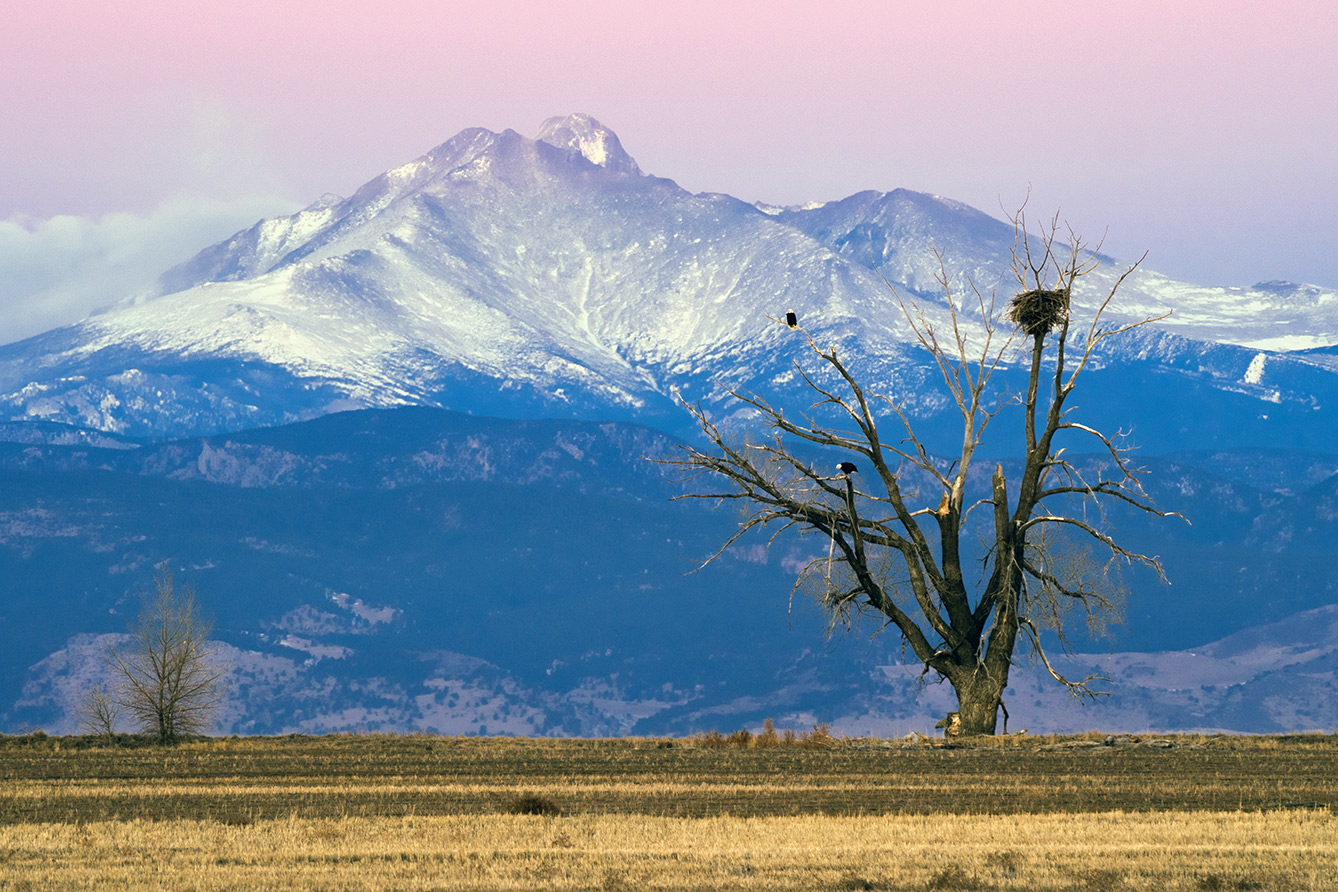 In Colorado’s Front Range – specifically in Weld County – Bald Eagles are in trouble. Weld County is among the fastest human growth areas in the state, and residential and commercial development continue to threaten existing eagle territory. 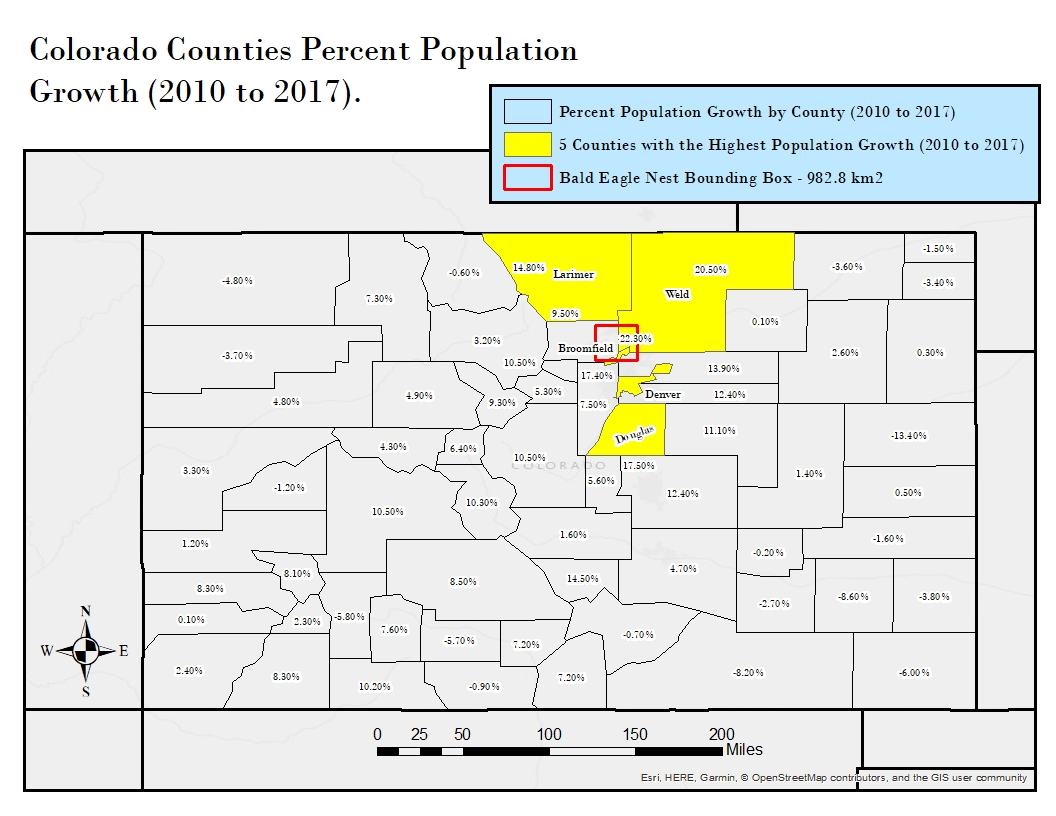 A Call to Action to Protect the Erie Nest from Encroachment

The American Eagle Foundation joins with Front Range Nesting Bald Eagle Studies, a Colorado non-profit research & conservation group, in urging our readers to submit original, kind and informed comments to the Weld County Planning Services based on salient points documented in the following blog post. Factual statements, brevity, and positive statement relating concern for the welfare of these and other nesting Bald Eagles in the Colorado Front Range will have the most impact.

Please ACT NOW by sending your comments to the address below. Deadline for comments has been extended until June 15, 2019. Help Protect the Erie Nest from Encroachment!

Letters or emails should be sent to:

Land use projections indicate that the majority (70%) of the 9 square kilometer territory that the Erie Bald Eagles now hunt and depend upon will be lost to development in the near future.

The Erie Nest – A Story of Courage & Resolution, Heartbreak & Determination

The Erie nesting Bald Eagles are emblematic of the remaining 195 pairs that live in Colorado, a state that now ranks #5 in the U.S. in human population growth. The pace of human development in the state is most pronounced in the northern Colorado Front Range, which is home to the Erie Bald Eagle nest. Unfortunately, many of the counties in the northern Front Range, like Weld County, lack land conservation programs, and coincident with the human population growth, wildlife habitat is disappearing at a blistering pace.

We all know the story about miners in the past using canaries to check the quality of air before descending into the tunnels to bring forth coal and other minerals. The Erie nesting Bald Eagles are the “canaries” in the proverbial Colorado nesting Bald Eagle coal mine. Their recent history documents ongoing struggles with human encroachment over the past four years. The onset of these disturbances was the legal removal of their original nest tree in 2015, which paved the way for construction of 2,200 homes on this undeveloped square mile tract.  Since that time, the eagles have twice moved their nest location, largely due to the difficulty of finding a suitable nest tree and sustainable environment.

After two subsequent failed seasons—including the tragic loss of two nearly full-grown eaglets due to collapse of their old and weathered nest tree—the Erie pair established their current nest in the fall of 2017.  As is typically the case with nesting Bald Eagles, they once more chose to nest within the limits of their familiar territory, this time only 1 mile from their original nest site. 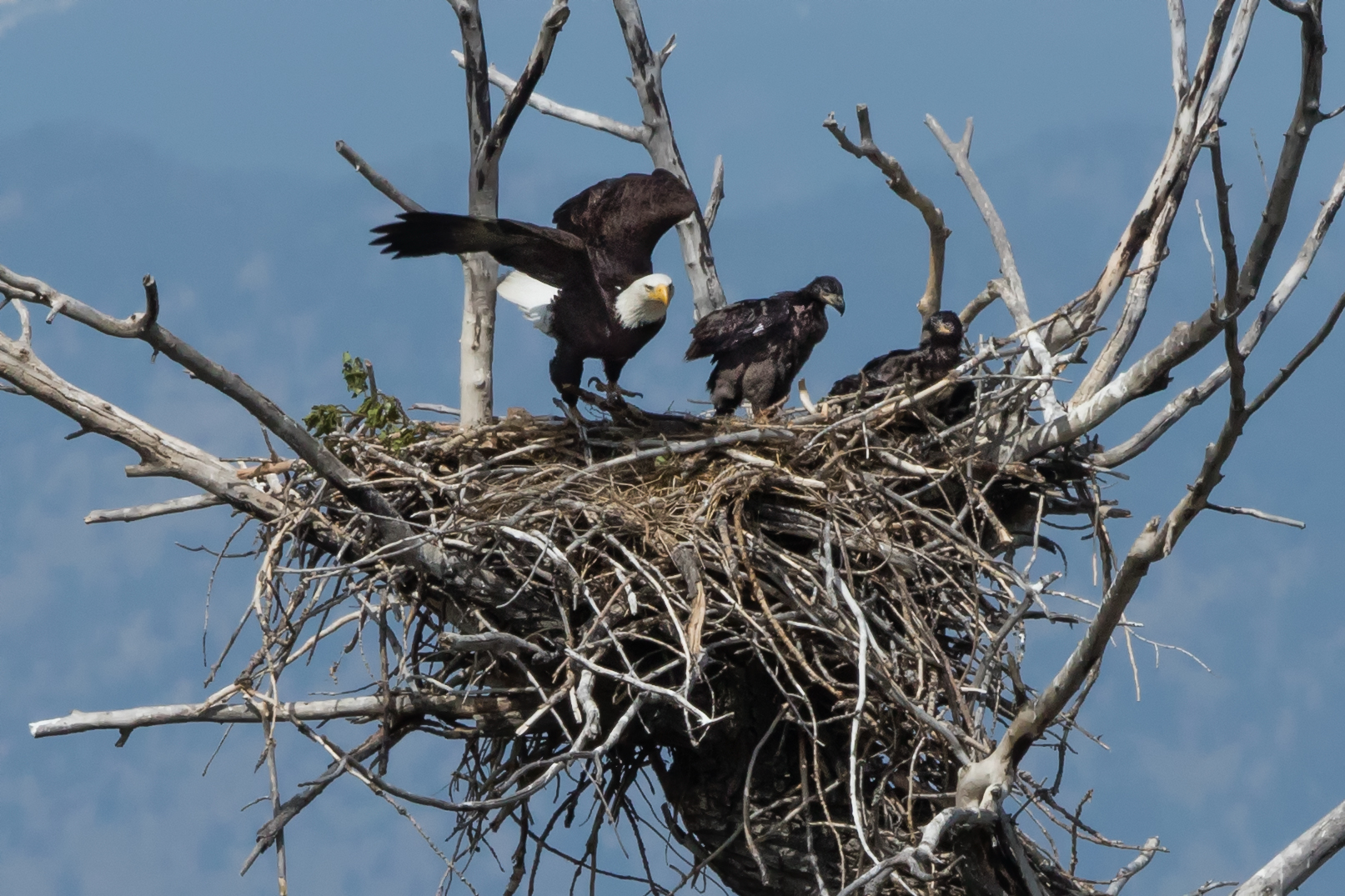 Female and both eaglets in early May, 2017, just prior to nest collapse on May 22. Both eaglets died when nest fell. 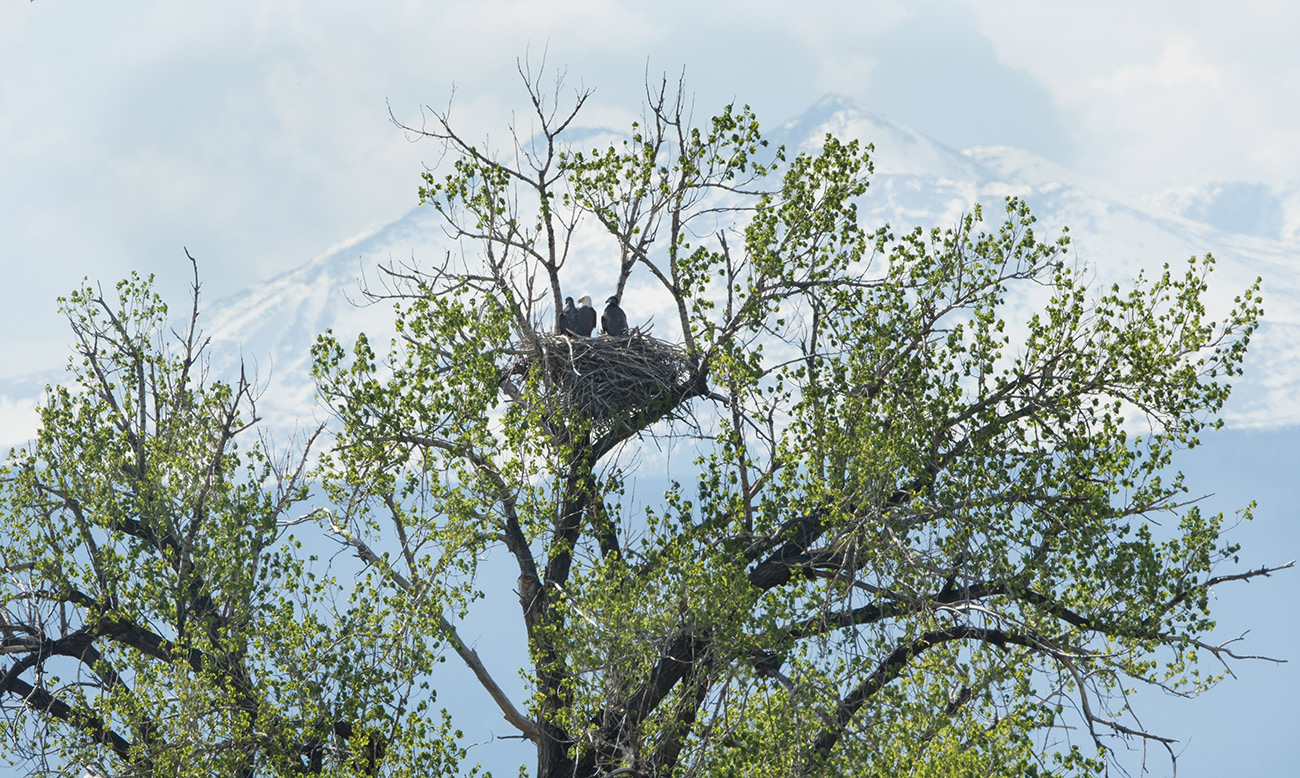 Summer of 2018 marked the first successful fledge season for these eagles since 2014. However, in the wake of that success, 2019 brings two more development projects within close proximity to their nest.

The Erie nesting Bald Eagles are sounding the alert regarding the significant amount of extractive, commercial, residential, and other development rapidly encroaching on eagle habitat in Colorado’s northern Front Range. Bald eagle nest numbers in Colorado are still more than 10 times lower than in states like Florida, or in the Pacific Northwest, where food resources are significantly more abundant, and weather conditions during nesting season are less severe.

Furthermore, in the nearly 1,000 square kilometer area surrounding the Erie nest, there have been no new successful Bald Eagle nests since 2014.  It is arguable that Bald Eagles are being forced into more marginal nesting situations in eastern Boulder and western Weld County, which is likely contributing to several reported nest failures—an inevitable result when eagles are compelled to nest in unsafe trees so they can distance themselves from oil wells, subdivisions, and other disturbances.

In the figure below: 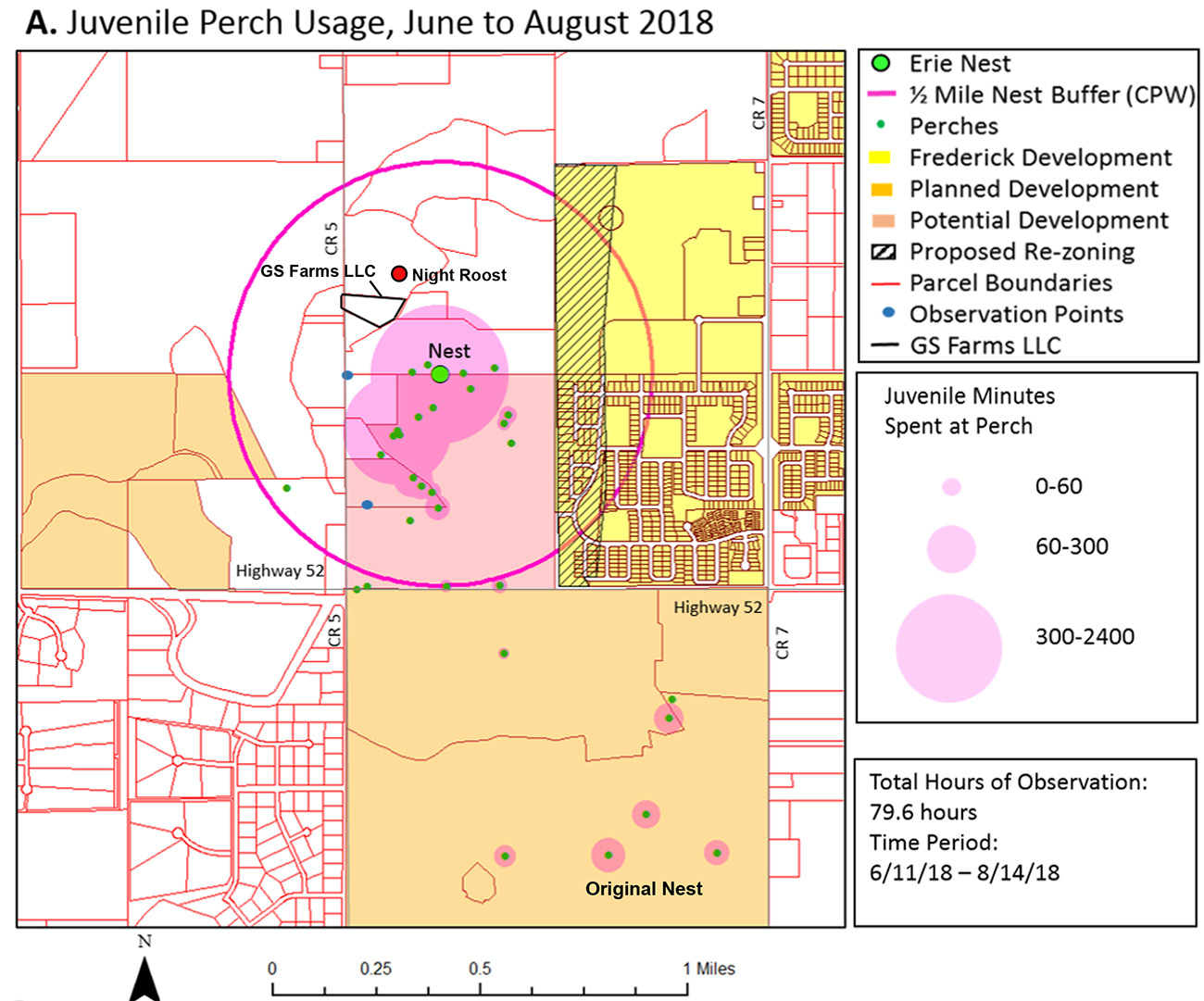 The Erie Male Bald Eagle is Missing – And an Eagle Dad in a Nest Close By – the CR16 nest, is Doing Double Duty!

Many people have been sharing the national news about the wildly popular trio Bald Eagle nest on the upper Mississippi River. Front Range Nesting Bald Eagle Studies (FRNBES) has discovered a similar situation with the Erie Nest and the CR16 nests that are about 2 miles apart.

There is a lot to share about this situation, as these are two nests that  have been studied for years and in great detail. Sometime over a year ago there were definitively 2 males; now there is only one, and he and both females have an enormous task, as they are raising 3 young eaglets currently–2 at the Erie nest, and one at the CR16 nest. Something happened to the Erie male at some point, but just what remains a mystery.

The male Bald Eagle in the CR16 nest is now helping support, protect, and feed the family in the Erie nest – as well as continuing with his duties in the CR16 nest. As far as we know, this has only been documented twice in the scientific literature.

If you take a look at the wide angle view in the photo below, you will see a major housing development looming in the background of the Erie nest. This is the scenario in the Colorado Front Range in places like Weld County where there are no open space programs or protection for wildlife. That housing project is expanding and there are more plans for a retail plumbing store immediately adjacent to the Erie nest area. This trio hunts prairie dogs immediately adjacent to their nests, and with only 1 male, the need for immediate hunt success and return to the nest to tend the young is paramount. This ability could soon be taken away by development.

The CR16 nest is in the foreground, and the female is just taking off to hunt, male and young eaglet in the nest. The Erie nest is off to the far right, and you can see the female standing guard over her 2 youngsters.

The CR16 nest (foreground left) and the Erie nest (background right) are both being supported by a single male Bald Eagle since the disappearance of the male in the Erie nest. (photo shows nests approximately 2 miles apart)

Points to Emphasize in Your Letter or Email

To carry the most weight and to be as effective as possible, letters to the developer should be personal, sincere, and succinct. Here are some salient points that you might want to focus on.

Help safeguard this area for the Erie nest and other eagles in Colorado. They need our help!  Please consider writing or emailing

This is very time sensitive issue. Please ACT NOW as deadline for comments is June 15, 2019.

Thank you for your support of the Erie nest and Eagles everywhere!