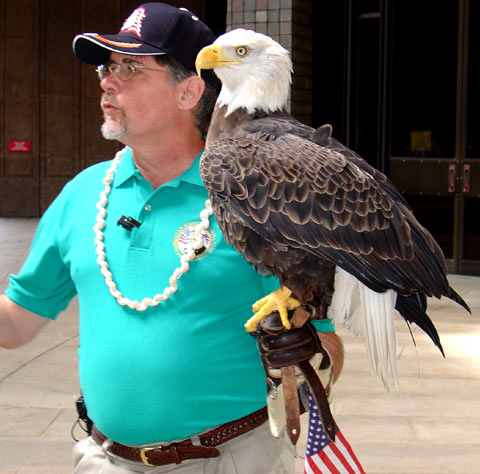 Challenger,” a 16-year-old American Bald Eagle from Tennessee, performed a special fly-by for school children and other spectators at the State Capitol on February 5th, which was proclaimed “Challenger Day in Hawaii” by Governor Lingle. Accepting the proclamation was Al Cecere, president and CEO of the nonprofit American Eagle Foundation. Challenger is in Hawaii to perform a free-flight demonstration during the presentation of the National Anthem at the NFL Pro Bowl All-Star Game at Aloha Stadium.
— REUTERS

Feb. 8, 2004: To kick off the NFL’s 54th Pro Bowl All-Star game on a soul-stirring, patriotic note, a non-releasable Bald Eagle named Challenger flew into Honolulu’s Aloha Stadium during the playing of The Star-Spangled Banner. The veteran performer is billed as the first national bird in United States history trained to provide that glorious soaring act for our country.

Traveling coast to coast with staff members of the American Eagle Foundation (www.eagles.org), Challenger educates and inspires people with his majestic flights. His appearances include ceremonies at the World Series, Olympics, White House and Fiesta Bowl. Challenger made appearances from sea to shining sea in 2003.

While on Oahu Island for the Pro Bowl, the celebrity eagle also appeared at the NFL’s celebrity golf tournament and an event at the Hawaiin State Capitol Building.

“Hawaii has never been home to bald eagles in the wild, but has more endangered plants and animals than any state in the Union,” Al Cecere of the American Eagle Foundation (AEF) said. “It’ll be a rare experience for many islanders to see our nation’s living symbol of freedom up close and personal.”

Acting as an educational ambassador, the eagle not only gives Americans a memorable glimpse of his stately beauty, but helps raise public awareness about wildlife protection and ecological concerns.

“At each place we go, as Challenger takes wing, you can feel the spirit of pride and patriotism swell up in everyone who sees him”, said Cecere”He’s the living symbol of what freedom and democracy in America are all about.

Named in honor of the late Space Shuttle crew, Challenger was blown from his nest in a storm before learning to fly. Rescued and raised by humans until fully grown, the young orphan became too domesticated to survive in the wild. One attempt to release the bird into nature nearly saw him beaten by a man with a stick. Now, the very social eagle is a frequent flyer aboard commercial airliners and receives top VIP treatment. Once in the air, pilots often proudly inform passengers about the special cargo they are carrying.

Founded in 1985, the non-profit American Eagle Foundation (www.eagles.org) has become a non-governmental leader in eagle conservation over the past seventeen years. Since 1991, its staff has traveled coast-to-coast conducting numerous public education programs with trained non-releasable eagles and other birds of prey.

The AEF has presented well over 9,000 educational free-flight birds of prey shows. It is federally licensed to provide care to over 70 birds of prey daily, including about 35 eagles. These birds are non-releasable due to permanent physical disabilities or accidental imprinting on humans. Many of the eagles residing at the Foundation’s bird facility have successfully reproduced in captivity. The organization operates the largest Bald Eagle breeding program in the world, and has released dozens of captive-hatched eaglets into the foothills of the Great Smoky Mountains area and other places. It has also been a party to releasing hundreds of other eaglets into the wilds in cooperation with the U.S. Fish & Wildlife Service and Tennessee Wildlife Resources Agency, and has supported numerous public education and eagle care/recovery projects in various States. Since 1990, the Dollywood entertainment park in Pigeon Forge, Tennesseee has been the primary corporate sponsor of the Foundation.
[/av_textblock]