Goodbye, Bob Hatcher, and Thank You!

A wonderful tribute to an exceptional man
contributed by the Tennessee Wildlife Resource Agency – Nashville, TN 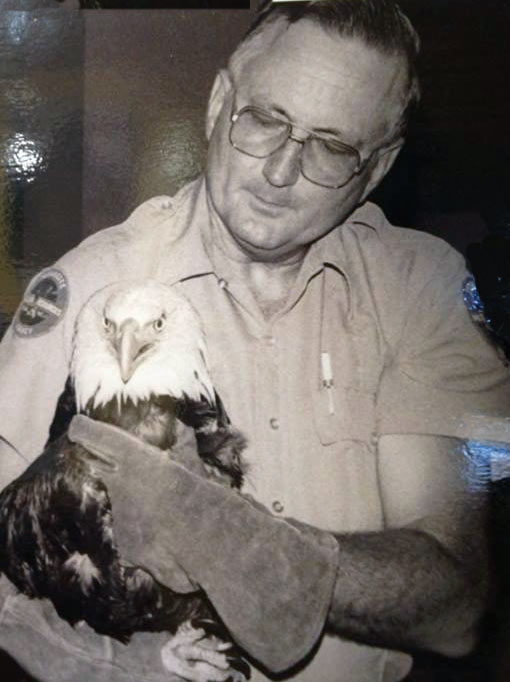 Retired TWRA Biologist Bob Hatcher was laid to rest today (July 27, 2014) after a funeral service at Antioch Methodist Church in Nashville. The following is about about Bob and an eagle release a few weeks prior to his passing.
—
Hatcher’s Legacy Will Live Long Past Eagle Named In His Honor

Everyone had hoped that Bob Hatcher could be at a celebration of his life where an American Bald Eagle, only three months old and just showing white feathery strips that eventually dominate the head and tail of adults, became a free bird on in front of friends, family, and an impressive gathering of news media.

Bob couldn’t be there on July 15th because cancer was gaining the upper hand over this special 76-year-old man, but everyone gathered at Bells Bend Park in the community of Scottsboro just outside of Nashville shared a commonality as admirers of Bob Hatcher.

On this day Al Cecere, CEO of the American Eagle Foundation, held tight to a young bird while entertainer James Rogers gently sang “Fly Eagle Fly” and outstretched arms aimed smartphones at ‘Hatcher’s Legacy,’ waiting for this bird named in honor of Bob to take flight into its new home.

For a Bald Eagle, that home can consist of thousands of North American miles over time, but on this sky-blue, non-humid and picture-perfect morning in mid-July, this landscape was within a few miles of a hacking site where in the 1990s Bob worked to restore the bald eagle population along the Cumberland River.

The hills behind the Bells Bend headquarters were tall, green, undeveloped, and formed a landscape that with the skyline created an ideal contrast for video and still photographers waiting anxiously for an eagle release.

No overcast skies allowed on this day as gray would have been out of place for an honoree famous for his optimism.

TWRA Director Ed Carter was among podium speakers prior to the actual release and talked of his respect for Bob and his relentless wildlife management drive.

Retired TWRA Director Gary Myers followed his successor and explained how back in the day federal dollars were rarely available for Bob’s particular projects, yet the man found ways to achieve his goals time and again.

Through tears Al Cecere thanked Bob for helping him begin and sustain what today is known as the American Eagle Foundation headquartered at Dollywood in East Tennessee.

Family members spoke lovingly of Bob and reported that he was well aware of the event in his honor, although unable to make it.

A few minutes after the last person praised Bob for his work and thanked him for his honorable ambitions, Cecere loosened his grip on Hatcher’s Legacy and the bird glided toward the hills among applause and hundreds of digital photos.

Today, Bald Eagles are relatively common along Tennessee’s river and lake systems. The days of TWRA receiving ecstatic calls about the latest eagle sighting aren’t as numerous as they once were because of Bob’s determination to see our national symbol removed from the endangered species list.

That happened in 2007 as the U.S. Fish and Wildlife Service determined the Bald Eagle had rebounded significantly and delisted our national symbol.

Still, most everyone gets excited at seeing a bald eagle on a local lake or river. Lots of volunteers and other agencies and organizations helped with eagle restoration work and many other states had successful recovery efforts. But in Tennessee, the heart and soul of Bald Eagle management was Bob Hatcher.

For as long as Bald Eagles fly in Tennessee, for every excited moment someone has at seeing our national symbol during a routine fishing trip just down the road from their home, the legacy of the man Bob Hatcher will endure, although anonymously for the majority of us.

Bob probably would not have cared about his own legacy as much as knowing his eagle recovery efforts and the enlightenment he sought to bestow on them, and so many other unique animals through his “work alcoholic” drive, provided them a permanent standing among our state’s everlasting wildlife.

Hopefully all those animals, but especially Bald Eagles, will carry his legacy into eternity as the life of the man himself has ended with his successful destiny complete as a wildlife biologist, family man, and friend

Shop at AmazonSmile
Scroll to top